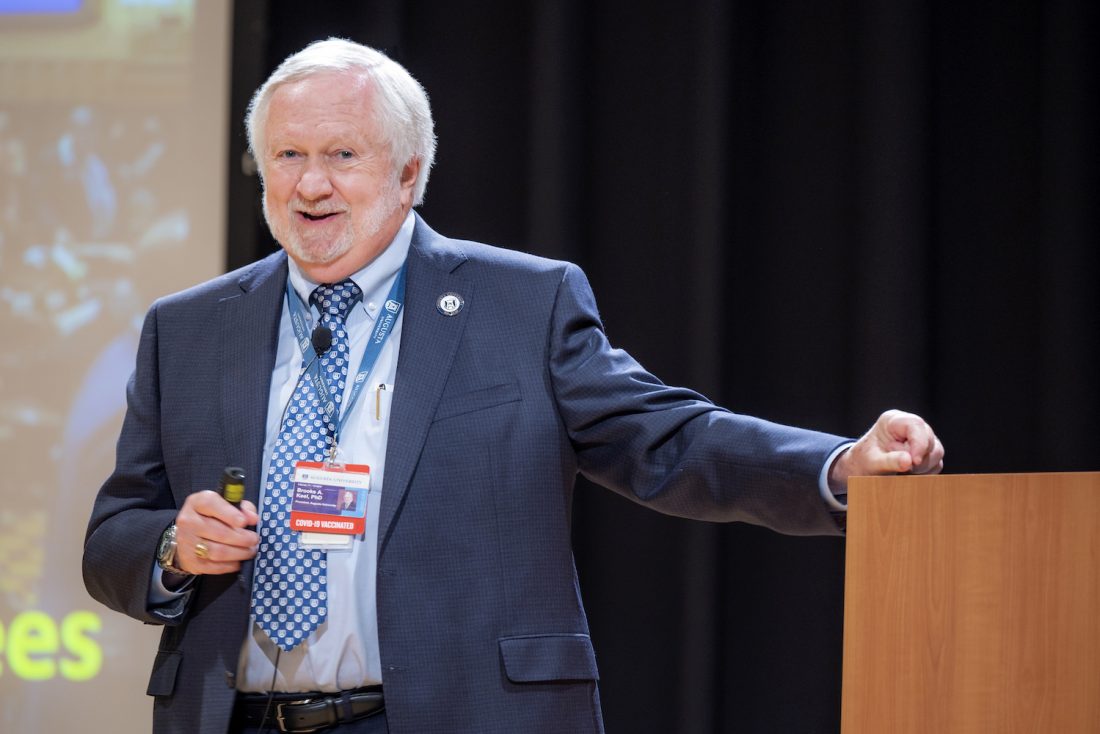 During the State of the University address this week, Augusta University President Brooks A. Keel, PhD, said the key to a successful future is not only increasing student enrollment, but also retaining those students for at least four years to ensure they receive a degree.

“We are competing with 25 other universities in the state of Georgia alone,” Keel said during his State of the University address on May 31. “Our future depends on making sure we continue to see an increase in enrollment every single year. I cannot stress to you enough how important that is. However, it’s not only about getting students in the door, which is important, but it’s about keeping them here and getting them out with a degree.”

Despite concerns over the impact of the COVID-19 pandemic over the past few years, Augusta University’s enrollment has increased more than 15% since fall 2015 and is averaging an annual increase of 2.4%, Keel said.

“But our undergraduate growth actually declined by 3.2%,” Keel said. “Generally, we lose about 800 students a year, but this past year we lost about 1,000.”

The university’s current retention rate is around 70%, with a target to increase the rate to 80% or more in five years, Keel said.

While some students may transfer to other universities, Keel said many of those students simply leave after their freshman year. In order to retain more students, Keel said Augusta University is focusing on the needs of undergraduates.

“Once we get them in the door, how do we keep them engaged? How do we make them successful so that they can get to the degree on the other end?” Keel said. “We are focused on bringing a lot of new freshmen here, but we are also very focused on making sure those new freshmen, when they get here, are successful and become graduating seniors.”

For the past several years, Augusta University has been working toward the goal of having 16,000 students by 2030, otherwise known as the 16×30 plan, Keel said.

“I actually mentioned this probably five years ago at a town hall meeting,” Keel said, laughing. “I said, ‘You know, we’ve got enough capacity here to be about 16,000 students. That’s about our sweet spot. And I think we’ll be able to do that by the year 2030.’ And no sooner had I said that, the word started spreading. And I am so impressed with how that has been a rallying call for the entire university.”

But in order to achieve that 16×30 goal, Augusta University needs to be prepared to meet the needs of current and future students, Keel said.

“We’ve got to start planning now,” Keel said. “We’ve got to have the faculty to teach all these 16,000 students. We’ve got to have new dorm facilities and new dining halls and we’ve got to increase our transportation. And, at some point in time, we’re going to need more classroom space. Those are all good problems to have.”

Just last year, Augusta University opened the new $70 million Science and Mathematics building on the Health Sciences Campus. But the university is planning additional  projects such as the construction of a 1,350-space parking deck in the southwest corner of the Health Sciences Campus, a new student welcome center and the development of a third building at the Georgia Cyber Center in downtown Augusta, Keel said.

Also, for the first time in the university’s history, Augusta University has created a strategic enrollment management plan led by Dr. Susan Davies, vice president for enrollment and student affairs.

“We have mapped out exactly how we can increase students in all the various categories,” Keel said. “The 16×30 isn’t just as a mile marker for us to hit. We now have a plan put together that will get us there.”

Also, beginning in the fall of 2022, the Board of Regents approved eliminating the Special Institutional Fee, leaving tuition rates flat for the 2022-23 academic year, marking the third straight year of no tuition rate increases, Keel said.

Tuition and fees for two semesters (fall and spring) for four-year degrees at Augusta University will total $8,122, down 8% from last year.

“This is a huge windfall for our students and all students across the entire state of Georgia,” Keel said, adding the fee elimination is due to the Georgia State Legislature approving $230 million in the FY 2023 budget during the most recent legislative session.

The state’s general funds will replace the SIF for colleges and universities this year.

“This is probably the most exciting and the most impactful budget that the General Assembly has passed in terms of higher education in recent memory,” Keel said.

In fact, the Georgia Legislature has dedicated more than $8.7 million in matching funds to expand the Medical College of Georgia’s 3+ Primary Care Pathway, Keel said.

The MCG 3+ program is an accelerated medical school curriculum that has been developed to recruit, train and place more primary care physicians in underserved communities around Georgia. It is also a solution to address growing concerns over physician shortages, the student debt crisis and disparities in health care, Keel said.

Earlier this year, it was announced that the MCG 3+ program will receive $2.1 million in federal funding as part of this year’s FY22 Omnibus Appropriations bill.

“This program aims to eliminate medical school tuition debt, reduce disparities by increasing access to care in rural and underserved areas across the state of Georgia and begins to tackle the extreme physician shortage that we are experiencing in one of the top 10 most populous states in the country,” Keel said.

According to the Georgia Board of Health Care Workforce, 60 of the state’s 159 counties have no pediatrician, 76 are without an obstetrician or gynecologist, 18 have no family medicine physician, 32 have no internist and 74 do not have a general surgeon.

The MCG 3+ program will substantially reduce the cost of medical school, shorten the time required for physician training and incentivize physicians to practice medicine in rural and underserved parts of Georgia by offering the opportunity to have medical school tuition eliminated.

This program was implemented in the fall of 2021 and MCG already has eight medical students in the 3+ Primary Care Pathway, Keel said.

“We’re in the process of starting the next cohort,” Keel said. “Our goal is to go from eight students in a class to 50. We’d like to have enough resources where we could have 50 medical students agree to join this program and cover their tuition to go to medical school for free. And then we’ll finally address the physician shortage in this state.”

The future is “extremely bright” at Augusta University, Keel said, adding he can’t wait to see what is in store for the next decade.

“We need to make Augusta University a destination campus. It needs to be a place where folks want to come to get their education,” he said. “We already get more than 50% of our freshman class coming from out of the area.

“But the word is spreading that, if you want to get your education — especially if you want to be in some of the fields that are unique to us, like cybersecurity, medicine, dentistry, allied health and nursing — this is the place you come to get your undergraduate degree in order to be successful going into those graduate and professional programs. You come here, to Augusta University.”