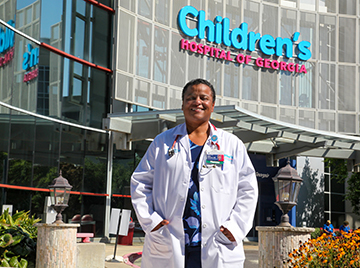 In the midst of cold and flu season and with COVID-19 continuing to loom large, it can be tempting for parents to turn to “so-called” natural immune boosters and supplements to keep their children from getting and staying sick.

A Children’s Hospital of Georgia pediatrician warns that parents should know that approach can come with risks.

“I think the big thing to remember any time you’re thinking of the ‘natural’ medications is that they are not regulated like prescription and most over-the-counter medications,” says Dr. April Hartman, chief of the Division of General Pediatric and Adolescent Medicine in the Department of Pediatrics at the Medical College of Georgia at Augusta University.

She says she often hears about parents giving their children things like probiotics to help with gut health, and although they may help some kids, data on their efficacy is limited, and they can be expensive.

The same is true for things like Echinacea, a supplement often promoted as a way to ward off the common cold and other infections by stimulating the immune system. “Again, there’s just not a lot of testing that’s been done to prove its effectiveness,” she says.

Many children are regularly deficient in vitamins C and D and iron – three components critical to immune system health, Hartman says. Parents can ensure kids also get more of those essential vitamins by making simple changes to their diet. Beans and lentils, whole grain breads and some fortified cereals can help increase kid’s iron levels. Things like milk, cheese and fatty fish like salmon are good sources of vitamin D, and fruits, not fruit juices, like oranges, pineapple and strawberries are high in vitamin C.

“It’s not difficult for kids to get the vitamins they need from eating a healthy diet,” she says. “The body absorbs vitamins and minerals better when they’re part of the food you eat every day.”

Parents also should ensure their kids stay away from excess amounts of sugar, which can actually suppress the immune system.

Parents should also remember that kids will inevitably get sick, and when they do, a healthy immune system, not necessarily medication, is the best tool to help them recover.

In fact, pediatricians don’t recommend giving children over-the-counter cold medicines, especially if they’re younger than age 2.  “They actually work against your natural immunity,” Hartman says. “If you have a cold, one of the things it does is makes your nose run, and that’s the body’s way of clearing it.”

Instead, tried and true home remedies like warm chicken noodle soup, honey to help suppress a cough or lemon juice to break up mucus can provide temporary relief of symptoms.

When it comes to fevers, Hartman says that instead of taking medicine to reduce a child’s temperature, a better strategy is for them to rest a drink a lot of fluids. The heat fevers produce is proof the body is working to kill the virus — even higher fevers over 100 degrees are not cause to rush to the doctor in most cases, she says.

However, if a child is having problems breathing, if they have a chronic disease that makes them more susceptible to serious illness, if they are less than six months old or if they have a fever that lasts more than five days, it’s time to call your pediatrician.

“Parents usually have a good gut instinct, and they should follow it,” Hartman says. “You know your child. And it’s never going to hurt you to reach out to your pediatrician. Nowadays, we even have a lot of virtual visits, with is great for things like this, just to get some reassurance.”