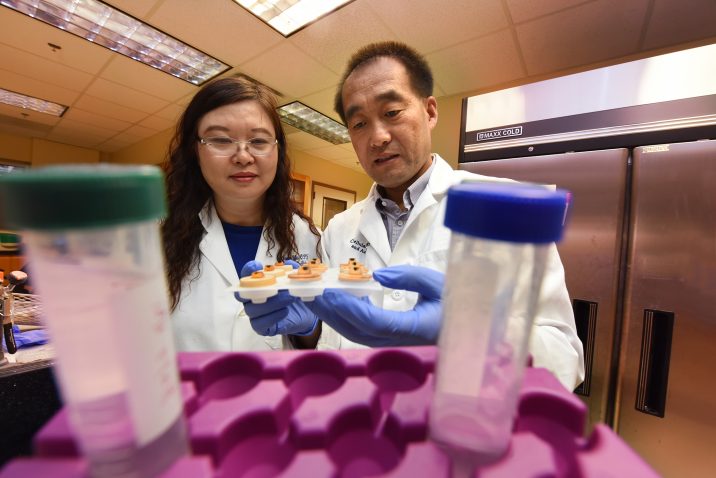 It’s an eye condition where genetics and environmental factors like ultraviolet light and vigorous eye rubbing conspire to make the usual curvature of the cornea more pointy, leaving us with double vision and nearsighted.

A $2.1 million grant from the National Eye Institute is now helping Dr. Yutao Liu, vision scientist and human geneticist, learn more about keratoconus’ causes and identify points to better diagnose, treat and maybe prevent the progressive disease that typically starts in our teens.

“We want to help patients better understand what is happening to their vision by better understanding how keratoconus happens,  and give physicians better points to intervene,” says the scientist in the Department of Cellular Biology and Anatomy at the Medical College of Georgia and James and Jean Culver Vision Discovery Institute at Augusta University.

Liu has developed the first mouse model of keratoconus, which is enabling his research team to watch the disease play out in real time. He is further exploring the role of mutations of the gene PPIP5K2, which he found in patients and used to make the new mouse model. He also is examining corneal tissue from people with and without the disease looking for still more genes and answers.

Keratoconus may start in one eye, then progress to both, although it tends to be more severe in one eye, Liu says. The natural curvature of the clear cornea that readily lets the majority of light into our eye becomes instead thinner, weaker and more cone-shaped. Light, which our eyes and brain convert to images, gets refracted so we get double vision, astigmatism and severe nearsightedness.

Some mistake the vision changes for more common eye problems, but the pace of change is typically much more rapid with keratoconus, Liu says.

It was in two multigenerational families with multiple family members with the disease, the investigators identified the two specific mutations in PPIP5K2, a gene highly expressed in both human and mouse corneas.

Now they want to learn more about how the mutations result in disease. They think at least one way the altered genes affect vision is with production of the cell fuel ATP in the cornea.

It’s known that the function and form of mitochondria, the cell powerhouses where the food we eat is turned into ATP, is different in the corneas of patients with the disease. “People have found reduced ATP production in patients,” says Liu, who is looking at powerhouses and ATP again in his mouse model and human tissue.  The clear impact of those lower fuel levels remains unclear, like whether it leaves corneal cells weaker or less able to hold their shape, so that is among the many questions Liu wants to answer.  The investigators also want to know whether, as they suspect, the altered mitochondria produce more oxidative stress, which is already associated with keratoconus.

They hypothesize the gene mutations along with environmental factors ultimately alter cellular processes resulting in the thinning of the cornea’s usually clear and well-organized stroma through which light must pass. There is also what appears to be a related change in the outermost epithelial layer of the cornea, which normally helps nourish the cornea and protect it from invaders like microbes or even a bit of debris. As the stromal layer thins, the epithelial layer thickens, an apparently harmless but possibly compensatory move, Liu says.

They are using whole exome sequencing, which looks at the protein-coding regions of all our genes, to look at PPIP5K2 mutations in more patients and find more novel genes and gene mutations as well.

They are looking in both corneal tissue removed for a corneal transplant for patients — which is essentially the only current way to fully correct the disease — and comparing what they find to healthy human corneal tissue.

In the mouse model they developed, which has, like some of the families, mutations in the PPIP5K2 gene, they are looking downstream of these mutations to see how the vision-altering physical changes actually occur.

By three months mice — who live about two years and have an accelerated path to most human-like disease — have opaque rather than clear corneas. With collaborators at Duke University, Liu helped develop software that enables them to use human optical-coherence tomography, which uses light to visualize the anatomy of the eye, to see this and other changes in the comparatively minute mouse eye structure. With this mouse version of OCT, they are finding in the mouse model that the corneal curvature has roughened and the epithelial layer thickened, like what happens in humans. In the compressed timeframe of a mouse, they can even watch the disease develop and look at what happens to the mitochondria and ATP. “Our technology can be used to track those changes in real time,” Liu says.

Liu suspects PPIP5K2 as well as some other keratoconus-associated genes may have similar pathways of action because their results are similar, Liu says. By walking down those action pathways, investigators can identify possible points where they could intervene to stop or eventually even prevent the disease in people with gene mutations that put them at risk, he says.

Progression of the disease tends to stabilize once patients reach their 40s, potentially because hormone levels that surge upward in youth and are thought to be a contributing factor, begin to drop, Liu says. While the absolute causes are not yet known, the National Keratoconus Foundation says hormones, along with genetics and environment, all appear to play a role. Environmental contributors include ultraviolet light exposure, vigorous eye rubbing as well as allergies which can lead to vigorous eye rubbing. Other associations include oxidative stress, a normal result of our regular use of oxygen that can be destructive at higher levels. The onslaught of hormones around puberty also is still an unproven hypothesis that ties back to the fact that most cases are diagnosed at puberty and often progress during pregnancy, according to the foundation. A percentage of patients who have LASIX surgery also develop secondary keratoconus.

More than a dozen genes are currently associated with the condition, some of which are involved in eye and cornea development and the extracellular matrix between cells, according to the U.S. National Library of Medicine.

Treatments for keratoconus include a variety of contact lenses that can, somewhat like a body shaper, help the cornea keep its shape for a while at least. There’s also crosslinking therapy that can strengthen the cornea and help halt disease progression but takes about six months to work. A corneal transplant is likely the closest thing to resolving the disease, Liu says.

Keratoconus affects men and women equally, about 1 in 500 to 2,000 individuals overall, and 5-15% of individuals born with Down Syndrome.