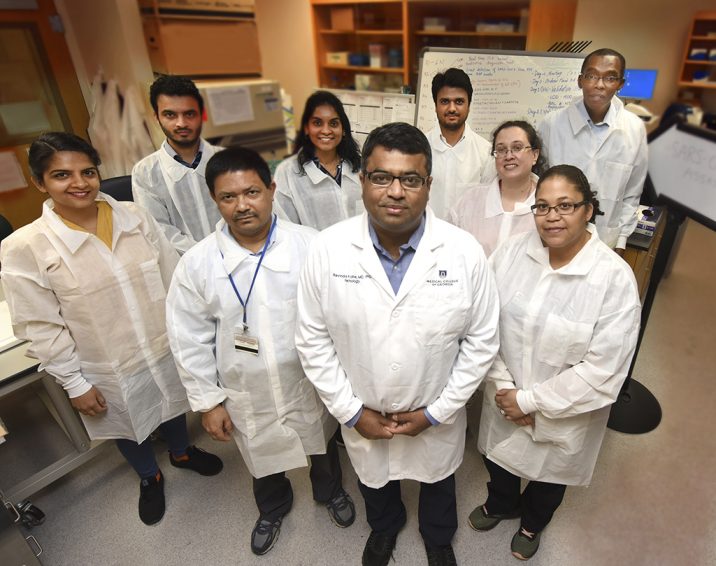 The Georgia Esoteric and Molecular Laboratory at the Medical College of Georgia Department of Pathology has developed a novel, accurate coronavirus test that can tell patients if they are infected within about two hours instead of waiting typically days to hear from remote testing facilities.

“We want patients and physicians in our community to have timely access to information that will ultimately benefit us all by helping limit spread of the virus,” says Dr. Ravindra Kolhe, director of the GEM Lab, chief of the Section of Molecular and Genetic Pathology and vice chair for translational research in the MCG Department of Pathology at Augusta University.

“More rapid identification of individuals who are infected will help ensure they get help as needed and that the risk of exposure to others is significantly reduced,” Kolhe says of the test rapidly developed by the GEM Lab team over recent days.

“We completed our COVID-19 assay validation on Sunday and immediately submitted the documentation to the FDA for their approval. This was a nonstop 90-hour effort by the phenomenal team in the GEM lab to develop this test, but we all felt a commitment to our community to make this test available here,” Kolhe says. While Food and Drug Administration approval is pending for the new test, the FDA released new guidance this week that its approval is no longer required for COVID-19 testing in a CLIA-certified laboratory like the GEM Lab. CLIA is a Centers for Medicare and Medicaid Services certification.

“As we have all seen in the news, identifying individuals infected with this virus within a few hours and initiating the quarantine protocol can have a huge impact on infection spread and potentially patient outcomes,” says Kolhe. “We are now running tests around the clock.”

While the priority is providing quick, accurate results to local residents, Kolhe says his lab also would like to test samples from outside the immediate area when requested, but those details are still being worked out. At the moment, the test is for patients whose samples are taken at the AU Health System.

To quickly meet demand, the GEM Lab team is now working around the clock to increase their testing capacity, which started at 72 tests in a 24-hour period and which they want to expand to 500 in coming weeks. The MCG GEM Lab also will work with other CLIA-certified labs interested in offering their new test.

Their new test, which works on the Luminex ARIES laboratory platform, is based on modified testing recommendations from the Centers for Disease Control and Prevention, Kolhe says, and focuses on two unique genetic markers for the virulent virus.

“For testing, we are looking at a conserved region that is unique for coronavirus 2019, has not been changed in this virus and is fundamental to its survival” says Kolhe of the two genetic markers, N1 and N3. Genetic markers are DNA sequences that are distinctive points of variation that can be used to identify a human or a disease.

The MCG lab’s own AI-driven genetic analysis, called in silico testing, also showed that N1 and N3 were distinctive for coronavirus 2019, and now the GEM team is looking for additional markers that also might qualify as unique to this virus.

“Everybody is looking at these targets and everybody has a different way of looking at them,” Kolhe says. “The biggest game changer in this is the turnaround time for patients because we are able to provide the test locally.” The test also indicates the viral load present, and higher loads increase that person’s chance of infecting others.

“We want to identify patients with a high viral load and who can spread the virus rapidly. We want to prevent #patient31 in Augusta,” Kolhe says, referencing a woman in South Korea who is believed to have significantly increased the virus’ spread there by coming in contact with many others in large crowds, including two large church services and dining at a buffet, before being tested. She had been in a minor car wreck a few days before which brought her to a hospital but she was not tested there for the coronavirus.

Until now, a patient sample from the Augusta area would be taken, put on a plane to a reference lab, where it may take three to four hours to process, he says, but the real issue is proximity and travel time to that lab.

For the first real-time test run this past weekend, the GEM Lab team began analyzing the sample at 10 p.m. and was reporting the status shortly after 2 a.m. to physicians at AU Health System. These first tests ultimately confirmed the first cases of infection reported in the Augusta area.

While the coronavirus test is in serious short supply because of rapidly escalating and unexpected demand, the individual components needed to make a test are not yet as in demand, so the GEM Lab team’s work included finding needed parts like the extraction cassettes they put the patient sample in.

“The GEM Lab team has worked 24/7 to complete validation and implementation in absolutely record time,” says Dr. Amyn Rojiani, chair of the MCG Department of Pathology. “Kudos to the entire team for their uncompromising dedication and expertise that has now made this test directly available for the first time to the Augusta community,”

The coronavirus has been around for at least 40 years but we are hearing and worrying so much about it now because there are changes in the virus’ structure that have made it more virulent and contagious, Kolhe says.

Coronaviruses are a large group of viruses that cause disease in animals and humans, according to the National Foundation for Infectious Diseases. Human coronaviruses were first identified in the 1960s and the novel COVID-19 surfaced in China in 2019. Most people get infected with one of the common human strains at some point in their lives. Symptoms of COVID-19 infection may occur two to 14 days after exposure and include fever, cough, difficulty breathing and shortness of breath.