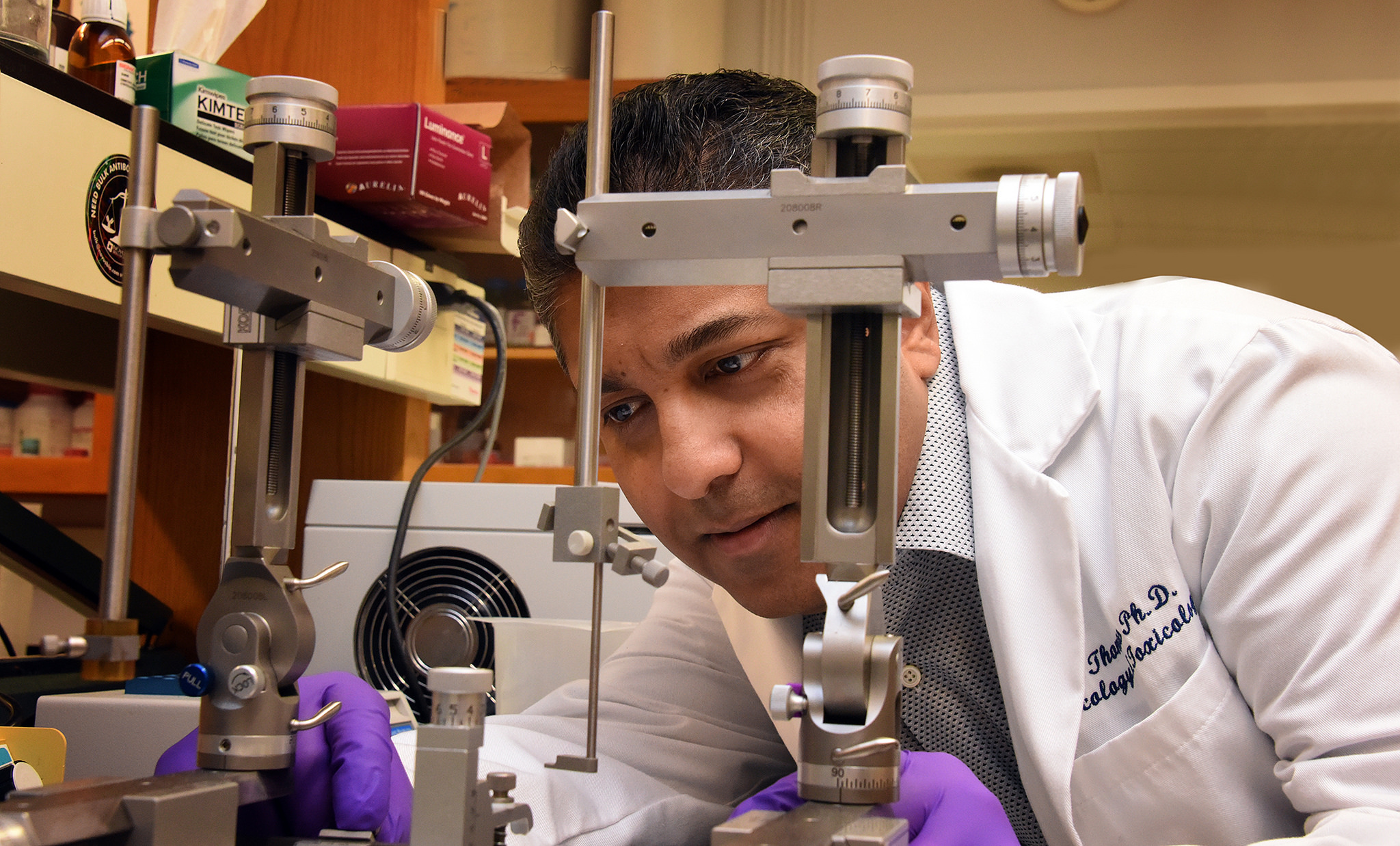 Oxidative stress plays a big role in the brain cell loss that occurs in Parkinson’s disease. Now scientists have their sights on a protein that inhibits one of the body’s natural protections against it.

The blocker is Bach1, a protein and transcription factor that can turn genes off and on – mostly off – and keeps inactive some 200 genes that could be protecting brain cells that are destroyed in Parkinson’s.

The way it’s supposed to work is that high levels of oxidative stress, which result from oxygen use but grow dangerously high in conditions like Parkinson’s, activate the protein Nrf2, which in turn activates these genes.

But the synergy is off in this disease where oxidative stress and Bach1 levels are up, so the ability to cope with the stress is likely down.

“What we are trying to do is bring the balance back because in this disease, the balance is lost,” says Dr. Bobby Thomas, neuroscientist in the Department of Pharmacology and Toxicology at the Medical College of Georgia at Augusta University. “One way to do that is by taking Bach1 out of the equation.”

Thomas recently received a $1.96 million grant from the National Institutes of Health to further pursue this novel treatment target for a degenerative brain disease that is diagnosed in some 60,000 Americans annually. His findings to date include showing that removing Bach1 protects laboratory animals from Parkinson’s.

Nrf2 is typically found essentially inactive, bound to a protein called Keap1  in the fluid portion of the cell called the cytosol. Oxidative stress prompts Keap1 to release Nrf2, which moves to the cell nucleus where it can activate some 200 neuroprotective genes. But first Bach1 must get out of the way.

Bach1 is sitting on the regulatory regions, called antioxidant response elements, or AREs, of these genes, effectively inhibiting these innate protectors from oxidative stress, Thomas says. While Bach1 should move, in this scenario the high oxidative stress of Parkinson’s seems to overwhelm the upregulation of Nrf2. So Thomas and his team are removing Bach1 from the equation with a drug and with gene manipulation.

In mice, they have shown that when they decrease Bach1, it prompts constant activation of ARE as well as non-ARE genes that also appear to protect the brain and could provide even more new treatment targets. The new NIH grant is enabling them to learn more about the neuroprotective mechanisms set free when Bach1 gets gone.

The ability appears significant. Bach1 deletion even protects against the neurotoxin used to create animal models of the disease. Now they are exploring what role Bach1 plays in neuron death by this neurotoxin, MPTP. They also are looking at what Bach1 contributes to a genetic form of Parkinson’s in which the protein alpha-synuclein, which occurs in the healthy brain, also becomes neurotoxic. Wads of alpha-synuclein, called Lewy bodies, gum up the works of neurons and supporting cells and are a hallmark of the disease.

In lab animals missing Bach1, Thomas’ team has watched drugs that directly activate Nrf2, drive expression of the good genes even higher. One rather surprising finding Thomas also is exploring is that when Bach1 and Nrf2 are both eliminated, the good genes somehow still get activated, providing more evidence that other genes must also be involved that may provide even more novel targets, he says. His lab has documented, for example, significant upregulation of a variety of protective genes and downregulation of others, like tumor necrosis factor alpha, that promote inflammation and ultimately create more oxidative stress.

It’s clear that some natural compensatory mechanism is at work even as the disease is occurring, he says, because, at least in the postmortem brains of Parkinson’s patients, there is significant upregulation of Nrf2 in the small percentage of brain cells that do survive.

“That tells you that those cells that are able to make high levels of Nrf2 can survive,” Thomas says. They don’t know if at least part of the problem in Parkinson’s is that high levels of Bach1 prevents the Nrf2 pathway from being active. Interestingly, they also have evidence that it may not take much Nrf2 to turn more cells into survivors. At least in animal models and human cells in culture, Nrf2 levels don’t significantly change with Bach1 gene deletion but expression of the antioxidant genes downstream definitely do.

“That tells you that maybe we don’t need a lot of Nrf2 to be expressed, maybe just a basal amount is enough,” Thomas says.

Activity of the Nrf2 pathway tends to slowly decline with age and its decline is known to accelerate in Parkinson’s, not just in the dopamine-producing neurons that help control voluntary movement, but also in the astrocytes, another brain cell type that helps nourish and protect them. Others have shown upregulation of Nrf2 in astrocytes alone, keeps neurons from dying.

Bach1 inhibition has shown potential benefit in a wide range of problems, from spinal cord injury to atherosclerosis and brain infections but Thomas is among the first exploring its potential in Parkinson’s. His previous work funded by The Michael J. Fox Foundation helped establish Bach1 as a potential target.

While activating Nrf2 is not a new goal for scientists, the field has primarily sought to do so by interfering with its relationship with Keap1. But to date, those therapies have altered Keap1, which is involved in keeping many proteins where they are needed in the cell and taking some to the trash when they are not.

“When Keap1 function is altered, you are compromising other proteins that need to be deleted from cells, which leads to toxic buildup in the cell so it will die anyway,” he says. “We are overriding this Keap1/Nrf2 pathway.” But he notes that he is among those still pursuing ways to disrupt the Keap1/Nrf2 connection without harming Keap1.

Thomas also notes that our hyperactive dopamine-producing neurons have an inherent property that spontaneously produces oxidation in the presence of oxygen, which contributes to the already high oxidative load and makes these brain cells particularly vulnerable.

About 10 percent of Parkinson’s runs in families. The majority of cases are likely a result of environmental factors, like pesticide exposure, and genetics. Aging is a major risk factor.

Thomas and his colleagues reported in The Journal of Neuroscience in June 2016 that the metabolite of a drug used to treat multiple sclerosis more directly targets Nrf2, potentially reducing side effects like diarrhea, nausea, vomiting and brain infection induced by the parent drug. The parent drug, dimethylfumarate, and its metabolite, monomethylfumarate, both significantly slow the loss of dopamine-producing neurons in the brain.