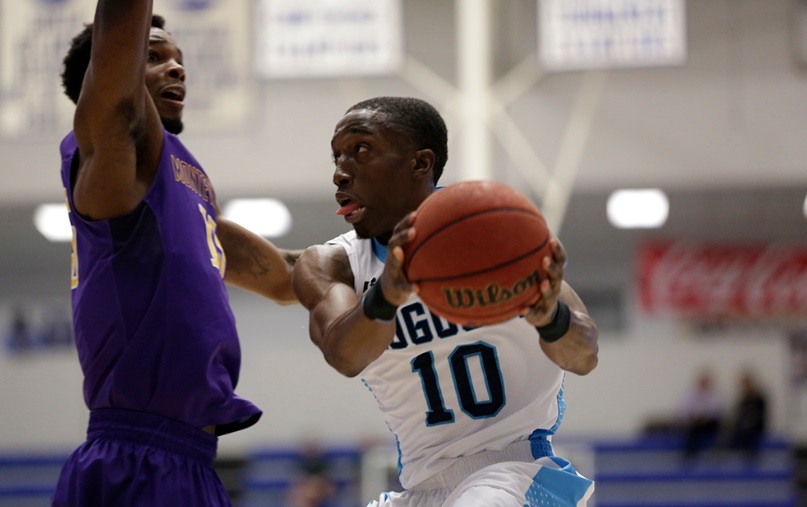 GREENWOOD, S.C. – Augusta University men’s basketball senior guard Keshun Sherrill was named the Peach Belt Conference Player of the Year at the PBC awards banquet Friday night on the eve of the conference tournament. It is the seventh PBC Player of the Year award for the Jaguars and the fourth under head coach Dip Metress.

Clayton State’s Alfonso Davis was dubbed the the Defensive Player of the Year, Armstrong State’s Corey Tillery was tabbed the Freshman of the Year and Chris Faulkner of North Georgia and Mark Vanderslice of USC Aiken were voted as the co-Coaches of the Year.

Along with the Player of the Year award, Sherrill was named first-team All-Conference for the third consecutive time of his career.

JAGUARS – PBC PLAYER OF THE YEAR

A senior guard from Cleveland, N.C., Sherrill is currently second in the conference and 14th in the nation in scoring with 22.6 points per game. He also leads the league in and is 14th in Division II in free throw percentage. Sherrill scored 42 points in a win at North Georgia, the most in a single game by any player in the league this season and tied for eighth on the PBC all-time list.

He had four games of 30 or more points, including 33 against USC Aiken in the season finale. Sherrill is the sixth Jaguar to be named the PBC Player of the Year, the first since Ben Madgen in 2010.

Sherrill is ranked third nationally for the most career points amongst active DII players and sits second in free throws made and fourth in free throws attempted. He is also fourth for field goal attempts.

The men’s basketball All-Conference team is listed below, as selected by the league’s head coaches. Coaches were not permitted to vote for their own players.

Player of the Year

Defensive Player of the Year

Freshman of the Year

co-Coaches of the Year