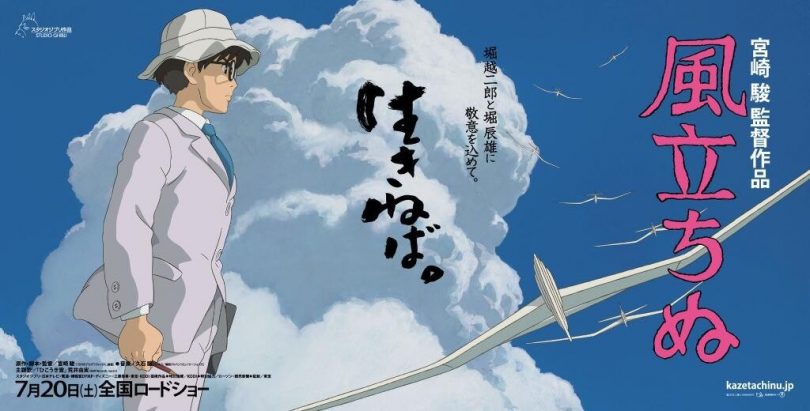 The Cinema Series and the Lyceum Series will host a showing of four Japanese films in the Maxwell Theatre on Saturday, April 15 as part of Eiga Fest, a celebration of Japanese cinema and culture. [Eiga (pronounced “AY-gah”) is the Japanese word for film].

The day begins at noon with a flower display and origami demonstrations from the Augusta chapter of Ikebana International. [Ikebana (pronounced “EE-kay-bah-nah”) is the Japanese art of flower arrangement].

The first film screens at 1 p.m., and complimentary tea and snacks are served throughout the day for students. All films will be screened in Japanese with English subtitles.

The Wind Rises is a Japanese historical drama anime written and directed by internationally acclaimed animation and manga artist Hayao Miyazaki. Produced by the world-famous Studio Ghibli, The Wind Rises is a fictionalized account of the life of Jiro Horikoshi, the designer of the Mitsubishi A5M fighter aircraft and its infamous successor, the Mistubishi A6M Zero (which was used extensively by the Japanese military during World War II). The Wind Rises was also notably the final film directed by Miyazaki before his (temporary) retirement in 2013.

Mifune: The Last Samurai is a feature-length documentary about the life and film work of Toshiro Mifune, widely regarded as one of Japan’s greatest and most prolific actors. During the course of his life Mifune would appear in nearly 170 feature films. Some of his best known, particularly overseas, belong to a 16-film collaboration with legendary filmmaker Akiro Kurosawa—director of Rashomon, Seven Samurai (which director John Sturges later remade for American audiences as The Magnificent Seven) and The Hidden Fortress [the latter of which heavily influenced Star Wars creator George Lucas]. Mifune: The Last Samurai blends archival stills, film clips and interviews with acclaimed directors and actors influenced by Mifune to create a one-of-a-kind portrait of the man many view as the face of Japanese cinema.

After the Storm is the heart wrenching story of part-time private detective and has-been author Ryota—a man as removed from his future as he is from his family. Living in the ruins of an ended marriage, and in the wake of his father’s death, Ryota struggles to find himself. His estranged son, his beautiful ex-wife, his despondant mother and thrifty sister; the family connections in Ryota’s life seem to grow more and more distant with each passing day. What lessons are there left to learn for a man who’s seen and done a little bit of everything? Only this: You can’t always get or do what you want.

The final movie screened during Eiga Fest is something special: The U.S. Premiere of the live-action adaptation of Moriyamachu Driving School. Based on the manga of the same name, Moriyamachu Driving School poses a not-so-simple question: What would it be like to take driving lessons from the Yakuza? That’s exactly the predicament Kiyotaka Sato finds himself in after he’s hit by Todoroki, a Yakuza goon who’s also trying to earn his license. To cover up the accident, Todoroki has Kiyotaka Sato kidnaped, and together, the two spend their summer at the Uehara family’s “unofficial” driving school.