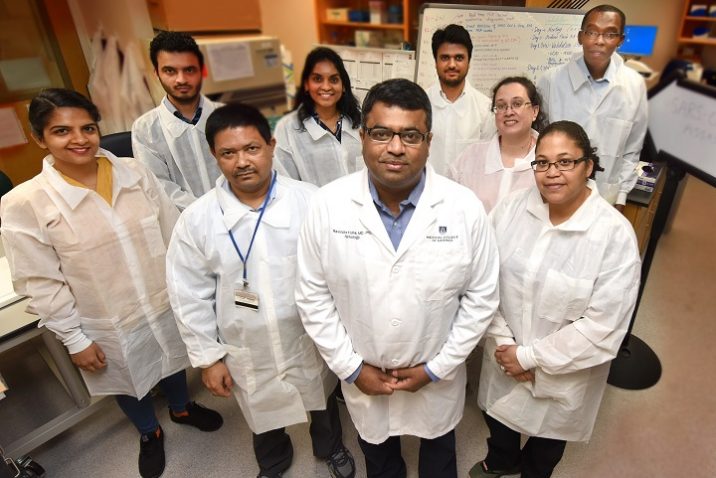 Fifteen hundred frontline workers are being recruited for a yearlong study to find what percentage are positive for the virus that causes COVID-19, what percentage become positive and whether the antibodies they produce protect them from reinfection.

“Once you get infected does your body have the capacity to prevent reinfection and for how long are important bottom-line questions,” says Dr. Ravindra Kolhe, director of the Georgia Esoteric and Molecular (GEM) Laboratory, and vice chair for translational research in the Medical College of Georgia Department of Pathology.

Frontline workers will get initial testing for the virus, then biweekly follow-up testing for the virus as well as antibodies in the blood and/or saliva that indicate the body is fighting the infection, says Kolhe, principal investigator on the federally funded study at Augusta University.

Dr. Ted M. Ross, director of the Center for Vaccines and Immunology and Georgia Research Alliance Eminent Scholar at UGA, whose work includes new vaccine technologies against all strains of influenza, is the principal investigator for SPARTA.

Questions Kolhe and his colleagues specifically want to answer include which antibodies produced by frontline workers like police officers and health care workers are best at neutralizing the virus. To help assess effectiveness, the study includes directly exposing the virus to the antibodies at a Biosafety Level 3 laboratory at UGA designed to enable safe handling of live viruses.

Once the most powerful antibodies are identified, they will be good models for synthetically produced versions, called monoclonal antibodies, which can be used for effective vaccine development and potentially as a treatment to help already infected individuals better battle the virus, Kolhe says.

Individuals who have the virus but no symptoms likely are producing the most potent antibodies.

“We are trying to identify those individuals, understand their antibody making mechanism and see whether we can reproduce that in the lab to help others,” Kolhe says.

For viral testing, Kolhe and his team are using both a nasopharyngeal swab and or saliva sample for the first test, but subsequent biweekly samples will be saliva only. Kolhe led development of a saliva test at MCG and AU Health System this summer.

Kolhe and his team in the GEM Lab conducted months of side-by-side testing of different sample collection methods as part of their saliva test development. He and others across the country exploring this more benign approach to sample collection of spitting into a sterile container are finding that the results are essentially equal to the more invasive swab sample.

In addition to testing for SARS-CoV-2, Kolhe’s study is looking for several common coronaviruses including 229E and Oc43, which essentially cause the common cold, and NL63 and HKU1, which also cause primarily upper respiratory illness.

They also are checking for influenza viruses; adenoviruses, which cause colds, fever and potentially pneumonia; rhinovirus/enterovirus, leading causes of common colds, sore throats and ear infections; parainfluenza virus, which more typically causes cold symptoms in children but can affect anyone; and respiratory syncytial virus, or RSV, which also can cause cold-like symptoms but can be more serious, particularly in infants and the elderly.

They also want to look further at the immune process that results in antibody production. There is some evidence that virus-specific B cells, which produce antibodies, and T cells, which attack the virus in response, may be present months after the initial infection in some individuals.

“We want to understand why some B cells have this amazing capacity and why somebody else’s do not,” he says. “And, can we make better vaccines from understanding the cells that do.”

While there is individual variability, antibodies should be present about seven days after exposure to the virus, and by day 21, antibody levels should be good. The virus should be infectious for about 14 days and gone in about 28 days, Kolhe says, although the virus’ impact may not be gone. The biweekly exams should help provide evidence on whether these assumptions about SARS-CoV-2 are accurate.

“We don’t know at this moment whether these antibodies are going to help prevent reinfection,” he says. He notes reinfection indicates that the antibodies and/or the level of antibodies your body produced was not optimal. Several monoclonal antibody studies already are underway in the country including at AU Health System.

Information collected by the new study also should provide more information to help companies and employees establish evidence-based back to work policies.

Kolhe notes that many asymptomatic individuals don’t know they are positive because they have not been tested. However frontline workers who have continued working to ensure fundamental services are provided to the public likely are at increased risk, although real data is limited, he says. Those who continue to test negative over the course of the yearlong study will serve as study controls.

Frontline workers, including police, firefighters and health care and dental workers and students, who want to participate in the SPARTA trial can call 706-737-1403, email sparta@augusta.edu  or visit here.