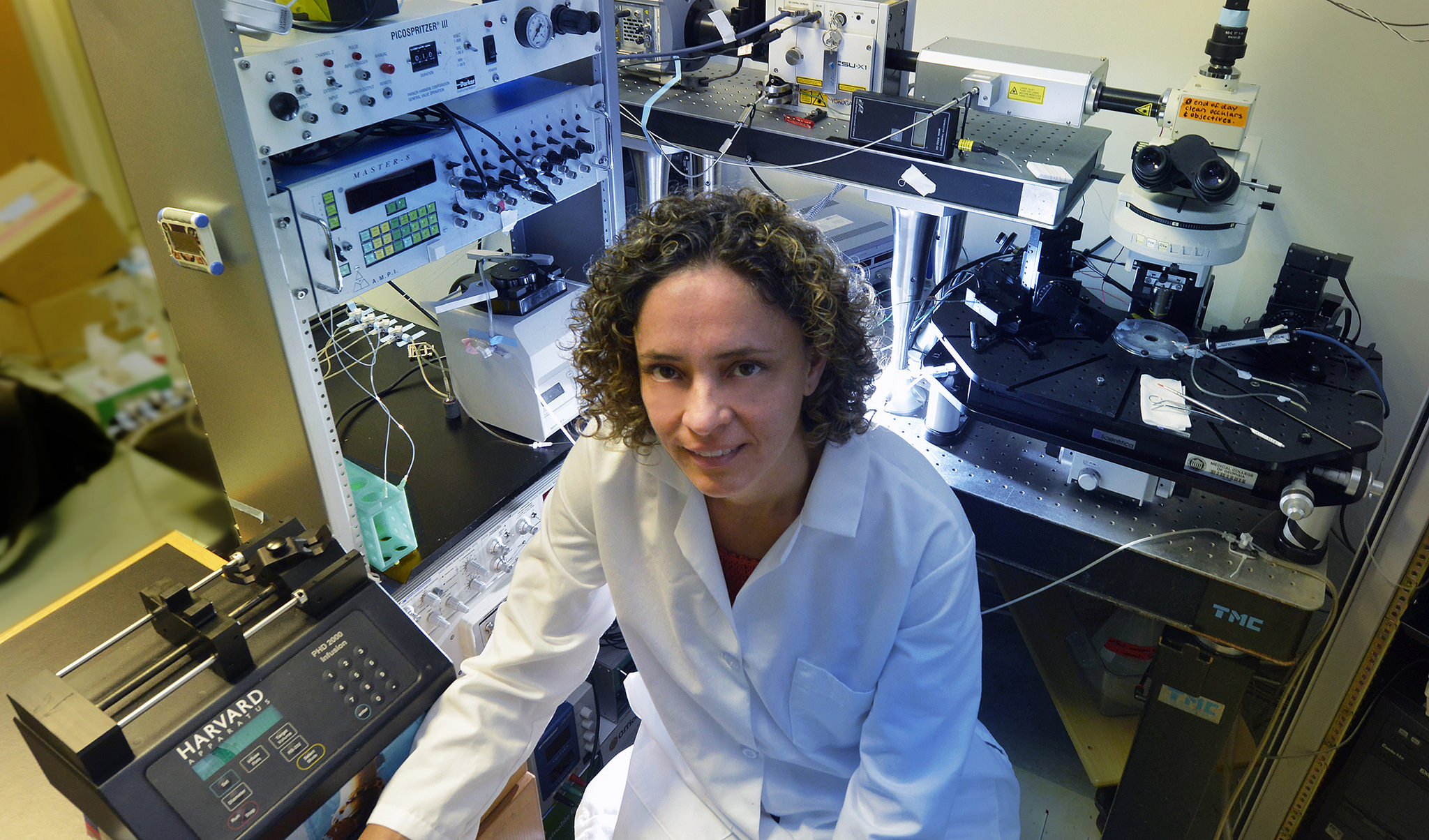 A star-shaped brain cell called an astrocyte appears to help keep blood pressure and blood flow inside the brain on a healthy, even keel, scientists report.

Like a health-care worker keeping tabs on a patient’s blood pressure, the finger-like appendages of astrocytes, called endfeet, quite literally wrap around the countless, fragile blood vessels in the brain, constantly monitoring what’s going on inside and around them, said Dr. Jessica A. Filosa, neurovascular physiologist in the Department of Physiology at the Medical College of Georgia at Georgia Regents University.

Filosa calls astrocytes “housekeepers” and the new findings indicate that, when they sense a change in blood pressure inside the fragile parenchymal arterioles, one of their many duties is releasing signals that help dilate or constrict the blood vessels, whichever it takes to maintain the healthy status quo.

“This is the first evidence of the astrocyte’s role in pressure-induced myogenic (muscle) tone, which is keeping things regular,” said Filosa, corresponding author of the study in The Journal of Neuroscience, jneurosci.org/content/35/21/8245.full.

In fact, astrocytes keep their fingers on the pulse of blood vessels and neurons simultaneously, apparently playing an important role in balancing their needs. “They are perfect bridges between what is going on with neuronal activity and blood flow changes to the brain,” Filosa said.

Still the new study suggests that, even if the neurons are not in need of an adjustment to accommodate a changing demand for energy and oxygen, astrocytes relentlessly monitor and respond to changes in pressure in the parenchymal arterioles to help keep the brain from getting too much blood. “It actually requires active astrocytes to maintain a constant tone,” Filosa said.

Astrocyte activity is driven by changes in the cell’s internal calcium levels: usually an increased calcium level means increased activity. Scientists used a model that enabled them to perfuse the parenchymal arterioles in a brain slice. When they increased pressure inside the blood vessels, they constricted as they should, which triggered an increase in the astrocytes’ intracellular calcium levels that enabled the cells to help the blood vessels maintain a healthy vascular tone. When scientists reduced available calcium inside astrocytes, through a process called chelation, the parenchymal arterioles still responded to changes in pressure, but could not hold a consistent tone without the support of the astrocyte endfeet.

“We want to maintain pressure and flow within normal ranges,” she said. “You can think of the concept of maintaining something that is constant, something that is always going on in your blood vessels and in your brain.” This basal control gets overridden in a time- and region-specific manner by task-evoked increases in blood flow needed to, for example, memorize a poem, read a scientific study, or do brain surgery. However, Filosa notes that the majority of the brain’s energy goes toward maintaining resting brain activity that enables basics such as breathing and walking.

Calling fragile parenchymal arterioles “astrocyte-coated” is no exaggeration since about 99 percent of their outside surface is literally covered by endfeet, which have the look of spider webs, Filosa said. “You don’t want to damage these vessels.”

Filosa notes that chronic stress, such as high blood pressure, can actually damage multiple layers of protection, leaving fragile parenchymal arterioles rigid and unable to do their jobs and astrocytes without their supportive, responsive grip. Too much blood flow or too high pressure in the brain can result in swelling, hemorrhage and/or stroke and leave the brain more vulnerable to ischemia and infection. Too much calcium in astrocytes also has been associated with neurodegenerative maladies such as Alzheimer’s.

Next steps include figuring out what effect activating astrocytes has on neuronal activity, so Dr. Ki Jung Kim, postdoctoral fellow and first author on the current study, is now recording from neurons as they change pressure inside blood vessels.

The brain is one of the body’s most vascular organs. The subtly pulsing carotid arteries on either side of the neck are essentially where the brain’s vascular system starts. The carotids come together at the base of the brain to form the Circle of Willis, and branches off that structure give rise to smaller, muscular extracerebral blood vessels that eventually cover the surface of the brain. These muscular vessels, also called resistance cells, branch many times, shedding all but one smooth muscle cell layer as they dive into the brain tissue to become parenchymal arterioles. Astrocytes have connections that reach all the way back to the muscular extracerebral blood vessels.

She notes that the sturdy, extracerebral blood vessels also play an important role in pressure control and vascular tone inside the brain. As examples, when anger or terror cause a sharp increase in blood pressure in the body, these big vessels will constrict to prevent sudden changes in cerebral blood flow and prevent large pressure changes from reaching fragile parenchymal arterioles. Even routine changes in blood pressure, such as those that take place in the simple act of standing, require these adjustments. Filosa notes, that when you stand up real fast, the reason you may feel dizzy is, in part, because astrocytes and smooth muscles didn’t have enough time to make their respective proper adjustments.