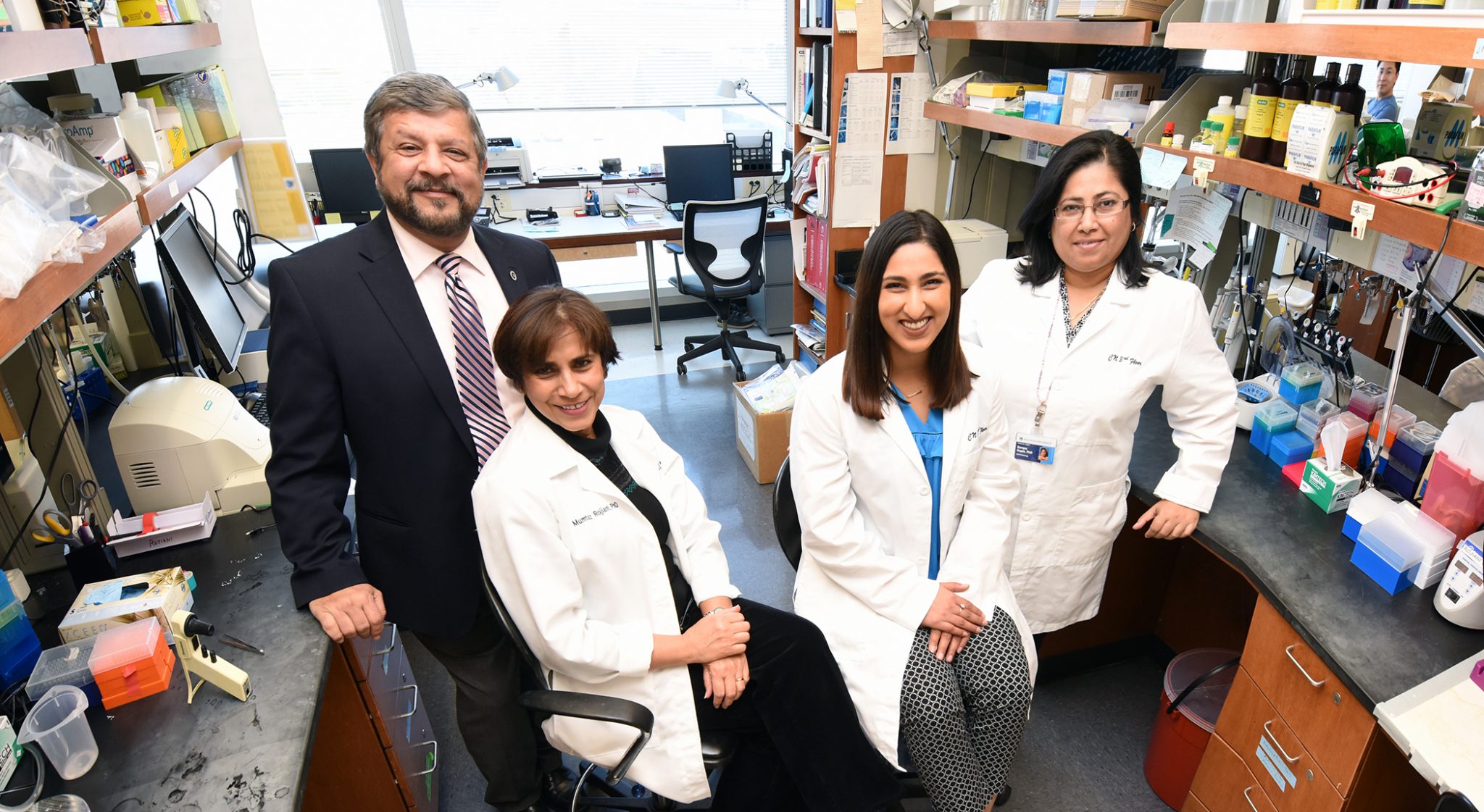 One small molecule that helps regulate gene expression plays a big role in keeping us safe from the machinations of cancer, scientists report.

In human lung cancer cells, they have shown low levels of the microRNA, miR-125a-5p, which enables the death of aberrant cells like cancer cells, correlates with high levels of the protein TIMP-1, which is already associated with a poor prognosis in patients with cancer.

Conversely, when they decrease TIMP-1 levels in these highly lethal cancer cells, tumor spread goes down while rates of cell death go up along with expression of miR-125a-5p, says Dr. Mumtaz V. Rojiani, cancer biologist in the Department of Medicine at the Medical College of Georgia and a member of the Molecular Oncology and Biomarkers Program at the Georgia Cancer Center at Augusta University.

TIMP-1 has a positive role in a healthy body to help balance levels of enzymes the body makes to ease cell movement for things like wound healing or reproduction. The healthy body and cancer make these enzymes, matrix metalloproteinases, or MMPs, to break down the surrounding matrix that helps keep cells stable. While it’s critical to positives like wound healing, when the matrix breakdown is usurped by cancer, it also gives cancer cells this freedom to move.

Dr. Amyn M. Rojiani, a study coauthor, likens the cancer cells to blueberries and the matrix to the pancake. “In order for these blueberries to move or become closer to each other, they secrete enzymes, matrix metalloproteinases, that break up the pancake, the matrix,” says the chair of the MCG Department of Pathology and Georgia Research Alliance Distinguished Cancer Scientist.

But in cancer, TIMP-1 levels rise dramatically and it has a distinctive role enabling both growth of new blood vessels and inhibition of apoptosis, a cell’s natural inclination to die if something unfixable is wrong.

“In cancer, what the tumor cells do is start secreting a lot more of these enzymes so they can break down the matrix and start migrating and metastasizing,” Mumtaz Rojiani says.

Classically, TIMP-1 should be inhibiting MMPs but over the years it has been found to have other functions that actually increase tumor aggressiveness.

In their studies of TIMP-1 expression in human lung cancer cells, they saw this aggressive response. It turned out that TIMP-1 is like a two-faced individual smiling at cancer sometimes and other times cutting it off.

Increased levels of two-faced TIMP-1 have been found in increased tumor spread and poor prognosis in breast, gastric and colorectal cancers as well as the non-small cell lung cancer the MCG scientists studied, which accounts for about 85 percent of all lung cancers and has a five-year survival rate of under 20 percent.

TIMP-1 overexpression also is associated with increased upregulation of Bcl-2, a protein which can prevent apoptosis, or cell death. To make bad matters worse, a key way chemotherapy works is by inducing apoptosis and TIMP-1 has been associated with potentially deadly drug resistance.

They wanted to learn more about how, and Ghoshal-Gupta suspected there was more involved besides just protein-protein interactions. So they started also looking at microRNAs and found knocking down TIMP-1 in cancer cells affected a lot of them.

“At that moment, we were not sure if it was good or bad change, just change,” Mumtaz Rojiani says.

When they looked again at exactly what microRNAs were changing, they found miR-125a-5p, which was known to promote cell death, go up in the face of less TIMP-1. They knew they had something.

They would also find a site on the TIMP-1 gene for miR-125a-5p to bind, says Mumtaz Rojiani, and the binding results in less TIMP-1 being produced.

When they knocked down TIMP-1 expression, it significantly increased expression of miR-125a-5p. Conversely, when they restored higher levels of TIMP-1, miR-125a-5p expression went down.

The look of the cancer cells even changed with the level of TIMP-1. At high levels they looked more like cells unshackled from their current location and able to migrate and invade. When they decreased TIMP-1 levels, the cells pretty much stayed put. They theorized that this benefit could be at least partially attributed to miR-125a-5p. So they added more synthetic miR-125a-5p to the cancer cells, and the lung cancer cells moved even more toward a stationary normal look and cell death increased. When they inhibited miR-125a-5p, the cells were even more ready to roam.

When they looked at the biopsies of lung cancer patients at Augusta University Health, they found as expected TIMP-1 expression much higher in the lung cancer tissue than nearby healthy tissue. But they also saw an inverse relationship between high levels of TIMP-1 and miR-125a-5p levels. In fact, tumor cells had almost no miR-125a-5p.

Some previous studies have shown a relationship between microRNAs and TIMP-1 function. More than 35 studies have shown that if TIMP-1 levels are high, a patient’s cancer prognosis is poor, says Ghoshal-Gupta, but the MCG team figured it was good since they were knocking down TIMP-1. And they were right; they saw more apoptosis, the postdoc says. The exact opposite happened when they overexpressed TIMP-1.

Next steps include determining if there are other microRNA and TIMP-1 interactions that lead to decreased apoptosis. They also want to look more closely at the mechanism of suppression of miroRNAs that impacts TIMP-1 levels. They all agree that as tumors prepare remote locations for spread – like to the brain in the case of lung cancer – that includes adjustments that enable the production of more TIMP-1.

“There must be different gene mutations of the cancer that must be affecting TIMP-1,” Mumtaz Rojiani says. One of the early adjustments in this tumor progression must be miRNA level modulation, Amyn Rojiani says. They also want to know if cancer also sends some extra TIMP-1 to those remote sites via exosomes, little traveling sacs by which cells swap messages and content.

Despite the clear association between high TIMP-1 levels and poor prognosis, TIMP-1 levels in the blood have not yet been used clinically as a prognostic indicator, the scientists say.

The work was funded in part by the Georgia Research Alliance, see http://gra.org/. Amyn Rojiani, Edgar R. Pund Distinguished Chair of Pathology, is a neuropathologist specializing in cancers that originate in or spread to the brain.