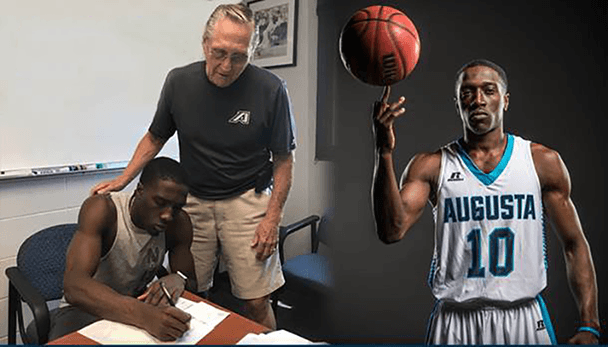 “It’s a great feeling coming from high school to college and then from college to get to the pros – everything happened very fast,” Sherrill said. “I’m excited to start my professional career and I’m excited to see the world. Not too many people at my age get to travel the world and for me to get to be able to and do what I love to do is just a real blessing for me. Of course I want to go and sightsee a little bit, but the main object is to go there and do my job, because like I said, basketball is my job now.”

Founded in 1952, New Heroes Basketball is a Dutch professional basketball club based in ‘s-Hertogenbosch, Netherlands. New Heroes plays in the Dutch Basketball League (DBL) and has won a record 16 Dutch championships. The team has also been a regular at international competitions and plays their home games at the Maaspoort Sports & Events.

Keshun Sherrill (Cleveland, N.C.) has had a historic career at Augusta, setting multiple school and conference records. He was so influential on the court that his No.10 jersey was retired by the university at the Athletics Awards Banquet on May 3, 2017.

In his senior season in 2016-17, Sherrill became the all-time leading scorer in Peach Belt Conference history with 2,333 points. He was named a 2017 All-American by the Division II Conference Commissioners Association and the National Association of Basketball, and was the NCAA Southeast Region Player of the Year and the Fred Barnabel Male Athlete of the Year at the 2017 Augusta Athletics Awards Banquet.

Sherrill led the conference in in points, field goals, free throws, and minutes played, and was second in three pointers and points per game. Sherrill was also named the PBC Player of the Year as a senior.