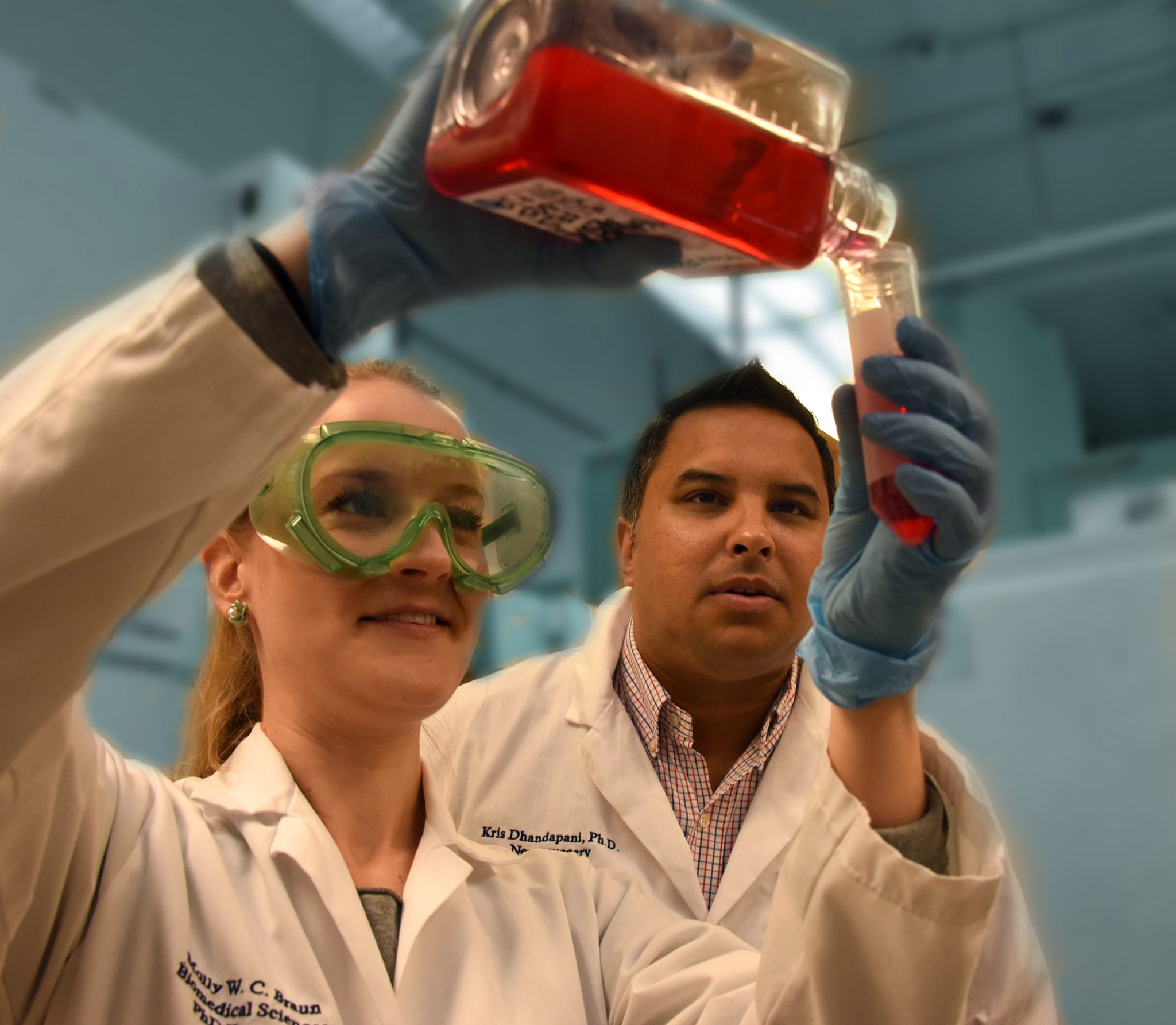 Scientists work to dissolve the NETs that worsen TBI damage

AUGUSTA, Ga. (June 6, 2018) – Immune cells that are first responders to a traumatic brain injury appear to also contribute to the secondary damage that can occur even days later, scientists say.

The NETs – or neutrophil extracellular traps – these immune cells cast at the site of a TBI can become scaffolds for clots, and the scientists have evidence that dissolving NETs can reduce swelling and improve blood flow and recovery.

A drug already used clinically for cystic fibrosis appears to do just that.

“Neutrophils are kind of the foot soldiers of the immune system. They are constantly circulating around so when you get a cut or any kind of injury, they are the first ones on the scene,” says Dr. Krishnan Dhandapani, neuroscientist in the Department of Neurosurgery at the Medical College of Georgia at Augusta University.

If you cut your finger, for example, neutrophils will consume – or phagocytose – nearby microorganisms, and NETs help them catch a lot of bacteria. But the role of these front-line defenders has not been explored extensively in TBI, says Dhandapani, who has evidence that they become bad guys – or at least a double-edged sword – following a head injury.

A new one-year $380,000 grant from the National Institutes of Health is helping Dhandapani and colleagues parse the apparently contrary role of neutrophils in TBIs, with the ultimate goal of improving survival and recovery.

In a TBI, it’s not typically infection, rather injured brain tissue that needs elimination and likely gets the attention of these cells. One thing Dhandapani doesn’t yet get is how that well-intended response leads to destructive swelling. It’s the swelling following trauma that elevates pressure inside the closed confines of the skull, increasing pressure on the brain and causing more damage in the hours and days following a TBI. Current treatments to reduce swelling include inserting shunts to enable drainage and removing a portion of the skull to temporarily provide more room for the brain.  Dhandapani wants to more directly target an early step in the complex cause.

Injury releases from our cells high mobility group box 1, or HMGB1, a protein that typically helps our DNA remain tightly wound. Dhandapani’s team has found HMGB1 in the spinal fluid of TBI patients, where it correlates with worse outcomes and elevated intracranial pressure. Like large molecules called lipopolysaccharides released from the walls of bacteria, when set free HMGB1 appears to activate the Toll-like receptors 4 on neutrophils, which leads to the NETs.

Toll-like receptors 4 also have a well-established role in recognizing pathogens like bacteria and mounting an immune response. In fact there is some evidence that when you knock the receptors out, NETs are not cast.

He has evidence that activating the many Toll-like receptors 4 on neutrophils prompts the immune cells to spit out their nucleus and cast NETs. NETs, which Dhandapani has found circulating in the blood of TBI patients, tend to cluster at the site of injury where they become an unwitting scaffold for clots that accumulate from normal blood components like red blood cells and platelets they capture.

In the now-narrowed passageway, blood flow slows, blood pools, pressure builds and the fluid portion of blood gets released into brain tissue.

“The toilet gets jammed up,” Dhandapani says of the process called hydrostatic edema. He thinks most of this occurs in the tiny capillaries on the venous side where blood should be heading back to the heart for oxygen.

DNase, an enzyme that degrades DNA and is currently used to thin out lung mucus in cystic fibrosis, appears to also dissolve the NETs – and presumably the clots they have enabled – and improve blood flow.

“We think by breaking up the NETs, this drug will actually improve perfusion of oxygen and blood to the brain,” Dhandapani says. Their early studies show subsequent swelling is essentially cut in half. Electron microscopy shows the blood even looks different – less clumpy – after DNase, much like what happens when Toll-like receptors 4 are missing.

“What we are trying to do with this grant is fill in the pieces,” Dhandapani says. They have already looked at what happens downstream of macrophages, debris-eating, inflammation regulating colleagues that neutrophils summon on their arrival.  He’s found that macrophages secrete pro-inflammatory factors which in turn activate aquaporin 4, a water channel protein that lets water in and out of the cell membrane and which occurs in high levels following trauma.

Now they are backing up to look further at what happens with the first-responding neutrophils. They are looking again at how and if Toll-like receptor 4 activation enables NETs after a TBI, whether macrophages are one of the things NETs catch and whether DNase continues to show promise in degrading the NETs, reducing swelling and improving blood flow.

Dhandapani notes that the usual swelling response in the brain must have some benefit, likely to help flush debris, and that’s probably just what it does with a mild injury.

“But when you go flying through the windshield and end up on the road, I think the injury basically overwhelms this ability,” the MCG neuroscientist says.

Neutrophils, the most common of our white blood cells, have long been known to engulf bacteria, and their ability to cast NETs makes them very efficient.

“You are going to catch all the fish you want,” Dhandapani says. “We see very analogous responses after a head trauma.” But with TBI, the NETS may be trapping things they shouldn’t.

DNA, typically is not free-floating, but can be found outside of cells following trauma and infection. Expulsion of the neutrophil nucleus will ultimately kill it, but the cells are naturally short-lived, the neuroscientist says

Traumatic brain injury, or TBI, is the leading cause of death and disability worldwide, according to the International Brain Injury Association. In the United States about 1 million people annually are treated and released from emergency rooms as a result of a TBI, 230,000 are hospitalized and survive, 80,000 are discharged from the hospital with a TBI-related disability and 50,000 die, the association says.