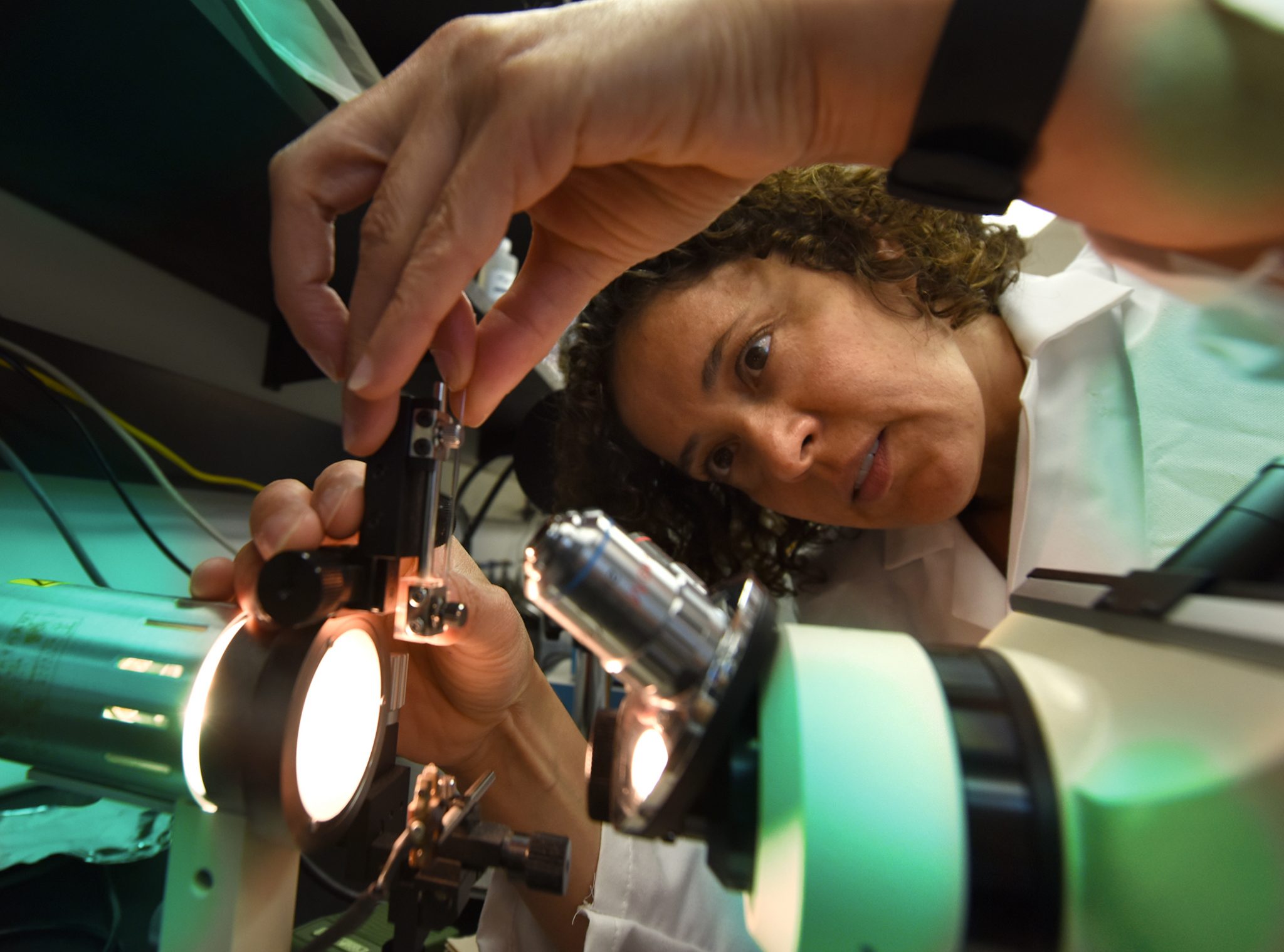 AUGUSTA, Ga. – The squeeze high blood pressure puts on fragile blood vessels in the brain appears to disrupt a normal, protective process that balances the blood flowing to our brains with the activity of our resting neurons.

In the face of hypertension, as blood flow decreases, neuron-nurturing brain cells called astrocytes may instead tell neurons to increase their activity, says Dr. Jessica A. Filosa, neurovascular physiologist in the Department of Physiology at the Medical College of Georgia at Augusta University.

These impairments in the neuroprotective communication between brain blood vessels, astrocytes and neurons may be an early factor in how hypertension impairs cognitive function, says Filosa.

“Untreated hypertension can lead to cognitive impairment but exactly how it happens, we don’t really know,” Filosa says. “We need to understand the window of change or shift in function in all these different cells. What exactly is happening, in what order and how fast?”

Filosa recently received a $1.7 million grant from the National Institutes of Health, which is enabling those pursuits.

“By the time patients are symptomatic, a lot of the physiology of the vasculature has deteriorated so the question is: How can we diagnose impairments in vascular function way before that, years before cognitive impairments are established and become symptomatic.”

Regulation of blood flow, both up and down, is a normal, relentless function in our bodies. Certainly that is true in the closed confines of the skull where there is literally little wiggle room, plus the brain just doesn’t like extreme ups or downs, Filosa says. In fact, fine adjustments are even made each time we stand up or sit.

“Your brain autoregulates to maintain flow relatively constantly,” Filosa says, which is a good thing.

Huge increases in flow, for example, can result in dangerous swelling, particularly if blood pressure also happens to go up. Conversely, lower pressure and less blood flow mean less energy for neurons, which pretty much operate with an empty cupboard that requires the continuous flow of blood and the oxygen and nutrients it contains to function.

“Neurons don’t have energy reserves so their activity is dependent on continuous blood flow,” Filosa says. That’s why brain cells can die so quickly in the aftermath of a stroke or head trauma and why they probably don’t function well with chronic hypertension.

High blood pressure makes the thin-walled parenchymal arterioles that carry the blood neurons need constrict, so they carry less blood. Astrocytes, whose finger-like appendages cover most of the surface of these blood vessels, sense the increased pressure.

Filosa has shown that the increased arteriole constriction they sense appears to trigger an increase in calcium inside the astrocytes, an indicator that their activity level has gone up. The increased calcium can lead to many things but in this case, researchers think the calcium overload turns normally protective astrocytes bad. They appear to both increase constriction – apparently by tightening their grip on the blood vessels – and promote inflammation.

“It can shift who these astrocytes become,” Filosa says. One of the many things they are further exploring is what happens, in turn, to the neurons.

They have evidence that one message neurons are not getting from these altered astrocytes is to reduce their resting activity even though less sustenance is available, creating an unhealthy balance for the brain.

“A lot of these things get activated as a protective mechanism, but chronically they can shift into being more deleterious,” she notes.

Over time, high blood pressure also results in a remodeling and stiffening of previously agile blood vessel walls so there is even less blood flowing. Filosa hypothesizes that the unhealthy remodeling further alters the protective conversations the vessels, astrocytes and neurons should be having.

Eventually, communication appears to get reset so that resting blood flow and resting neuronal activity that enable basics like breathing are out of balance. “There is a rightward shift,” Filosa says.

This imbalance may also eventually decrease the normal ability to increase blood flow and neuronal activity when it’s time to solve a math problem or to have that significant conversation with a friend.

To better understand what goes bad, they are looking again at how a healthy balance happens and what hypertension does to it.

They are looking at what happens to calcium levels inside astrocytes in response to higher and lower pressures in the parenchymal arterioles in the brains of both normal mice and those that already have impaired blood flow. They also want to know what precisely mediates any change.

They are looking, both in brain slices and lab animals, at how pressure and flow changes in the fragile arterioles impact the resting activity of neurons in both the presence and absence of cardiovascular disease.

High blood pressure is a well-established risk factor for stroke and for cognitive function, in fact, a recent study published in Frontiers in Aging Neuroscience indicates that hypertension accelerates Alzheimer’s development and that midlife control of high pressures may delay onset.

Rest is relative for neurons, which always are working at some level to maintain our basic functions. In fact, the majority of the brain’s energy goes to maintain resting activity that enables basics like breathing, Filosa says.

Functionally evoked changes in blood flow – like when you are actively thinking or doing – temporarily override cerebral autoregulation that in a healthy state balances basal blood flow and resting neuronal activity.