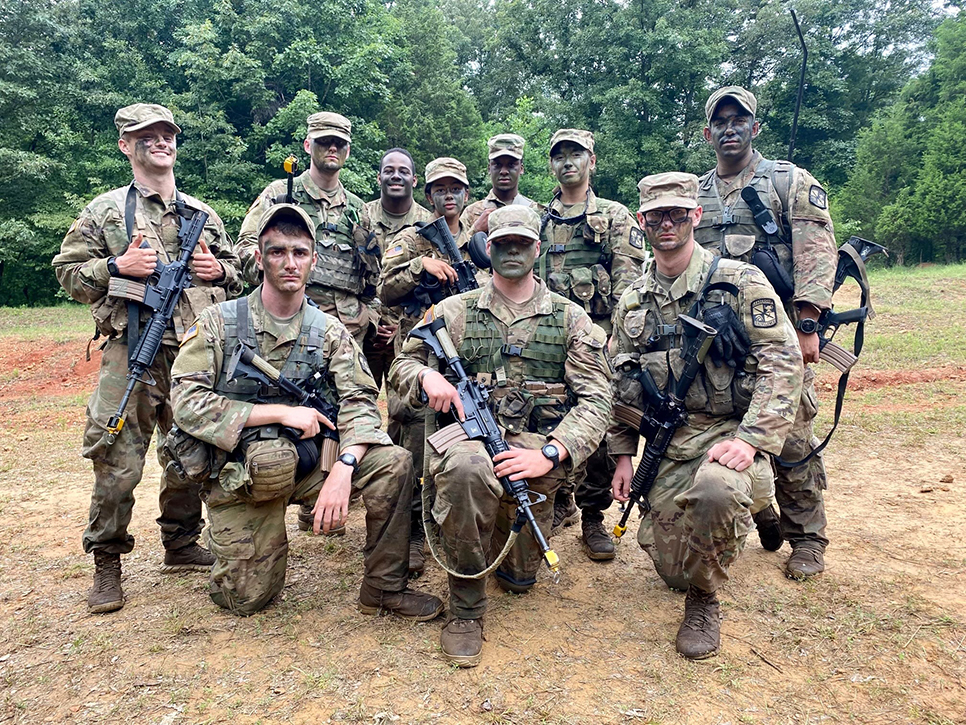 “The successes of this past summer are a credit to the hard work of the cadre and our cadets,” Keenan said. “The Military Science 3000 instructor, Capt. Will Myers, put in countless hours to help ensure our cadets had the best chance to earn their opportunities. This summer reflects the strength of our program in those students we are recruiting to Augusta University and the development of the students within our program.”

Keenan said during the summer before his senior year, he enjoyed a CPDT experience in Kaiserslautern, Germany, where he attended Cadet Troop Leadership Training (CTLT) where he shadowed a current second lieutenant in an “internship” role.

“I thoroughly enjoyed this immersive education experience as it helped to prepare me for the rigors of active duty … not to mention, I also got to experience a new country and the culture,” he said.

Cadet William Green attended CTLT with 2nd Battalion, 501st Parachute Infantry Regiment “Geronimo” at Ft. Bragg, North Carolina. He said the experience allowed him to see a lot more of the daily life of a second lieutenant as well as learn more about being a platoon leader.

“I was assigned to a mortar platoon and was able to see how they operate,” Green said. “Although we did get to do some cool mortar stuff while I was there, the most beneficial training I received was the mentorship and guidance the lieutenant I was assigned to gave me.”

Green said his biggest takeaway from was the human element of the military “cannot be understated or ignored.”

“Soldiers with good home lives are soldiers who can focus on their duties,” he said. “The role of officers isn’t always to plan trainings and to draft operations orders, but it is also to ensure that the soldiers you work with are good people living good lives.”

Cadet Ethan Cast attended and was a top performer at Cadet Summer Training. He excelled at day and night land navigation, basic rifle marksmanship, first aid and a timed 6-mile ruck march and earned the coveted “Recondo” badge. He said his overall experience was similar to Army courses he has attended in the past.

“It met my expectations in the sense that I knew every single activity that we would be doing, I knew the standards for the performance on each event, and I knew that I would have to apply everything I learned MS1 to MS3 year,” said Cast, who said it was a large-scale, intense training event that was excellently sequenced.

“It exceeded my expectations in how competent and willing to help each member of my platoon and cadre were.”

Cadets Noah Whitacre and John Sasser had much different internships. Whitacre interned at Fort Gordon with U.S. Army Cyber Command, or ARCYBER. He said he was looking for internships that would benefit his career goals.

“Since my goals involve serving in the U.S. Army and pursuing a career within cyber, I wanted to look for a cyber-focused internship with the Army or [Department of Defense],” Whitacre said. “When I saw the ARCYBER internship being offered, I knew immediately that fit my criteria and I applied to the internship shortly after.”

Sasser’s internship was originally scheduled to be in Ohio at Wright-Patterson Air Force Base, but COVID-19 forced the move to the virtual learning environment.

“My course, advanced cyber education, is part of the Air Force’s Institute of Technology program,” Sasser said. “This institute is a go-to for many master-level students. During selection, I looked at several choices for interning … What piqued my interest in this internship was learning. This is a chance to increase my knowledge in a field that is hot. It is common for internships to be more about doing a day’s work than learning. This course was all about learning.”

Whitacre said his biggest takeaway from his internship was that it’s OK not to know everything up front.

“I felt extremely overwhelmed by many of the topics and concepts that many of the sponsors and mentors were sharing with me,” he said. “However, I came into the internship with an open mind and willingness to learn, and it paid off greatly in the end. The skills I picked up and the concepts I learned were priceless.”

Sasser said he was impressed by the promise these students show.

“Listening to other students speak on topics that I had just learned about really blew me away,” he said.

Cadet Mandy Naquin had the opportunity to intern at behavioral health clinics and at Madigan Army Medical Center on Joint Base Lewis-McChord in Lakewood, Washington.

Naquin has always had the desire to become a part of the military while working in the medical field. She said after her experience with the ROTC programs, especially the internship, she has “an unquestionable desire to serve as an Army clinical psychologist.”

“There were so many things I was able to learn through this opportunity … I think the diversity not only in the people but their positions and the way they all practiced differently with essentially the same goal — to be of service to others in need — was my biggest takeaway and what inspired me the most,” she said.

“For my internship, I wasn’t with the same clinic for three weeks; instead they gave me the opportunity to sit in with different clinical psychologists, social workers, even forensic psychologists in different units on base, most of whom directly commissioned into the Army and some who were cadets just like I am. It was one thing to hear about these Army professionals, and another to get to learn from them firsthand.”

Cadet Savannah Morgan participated in an Army Medical Department internship also at Joint Base Lewis-McChord. She floated between occupational therapy, general surgery and finished her time in orthopedic surgery, which is the department that interests her the most.

Morgan said a military and medical career is exactly what she’s been striving for. Her biggest takeaway from the internship was in the end, “all my hard work I’ve done [and] will do will pay off.”

“I say this because before going to the internship, I was doubting my career path of becoming an orthopedic surgeon, mainly because I have struggled with college,” she said. “I was doubting myself, stressed, questioning my future. This internship dispelled all my doubts I was having. I now know for a fact that being an orthopedic surgeon is exactly what I want; it will be hard to get there, but in the end, it will all be worth it.”

Cadet Jamir Malone said he had a great time at Air Assault School in Fort Benning, Georgia, and Cadet Marc Cowen enjoyed his experience Air Assault School in West Point, New York. Cowen and Malone enjoyed a mentally and physically challenging course that exposed them to cadets from across the nation, as well as professional Army senior officers and noncommissioned officers.

“Before you can get into the school, you would have to make it past Day 0,” Malone said. “In Day 0, you must complete an obstacle course and two-mile run under 16 minutes. The school was split into three phases: Combat Assault, Sling Load, and Rappel. Over the course of the time there, you will have to pass two tests based off the material learned, a 6- and 12-mile ruck (running with a 40-pound backpack). Toward the end of the school is where it got fun. I was able to rappel out of a helicopter hovering 92 feet off the ground.”

Cowen said learning the material in a short amount of time was stressful, but what made it difficult was the lack of sleep and physical exhaustion. Regardless of the rigors of the course, he said he had a great time and recommends this course to anyone who wants to push and challenge themselves.

“I expected the school to be tough, and it definitely met those expectations.”