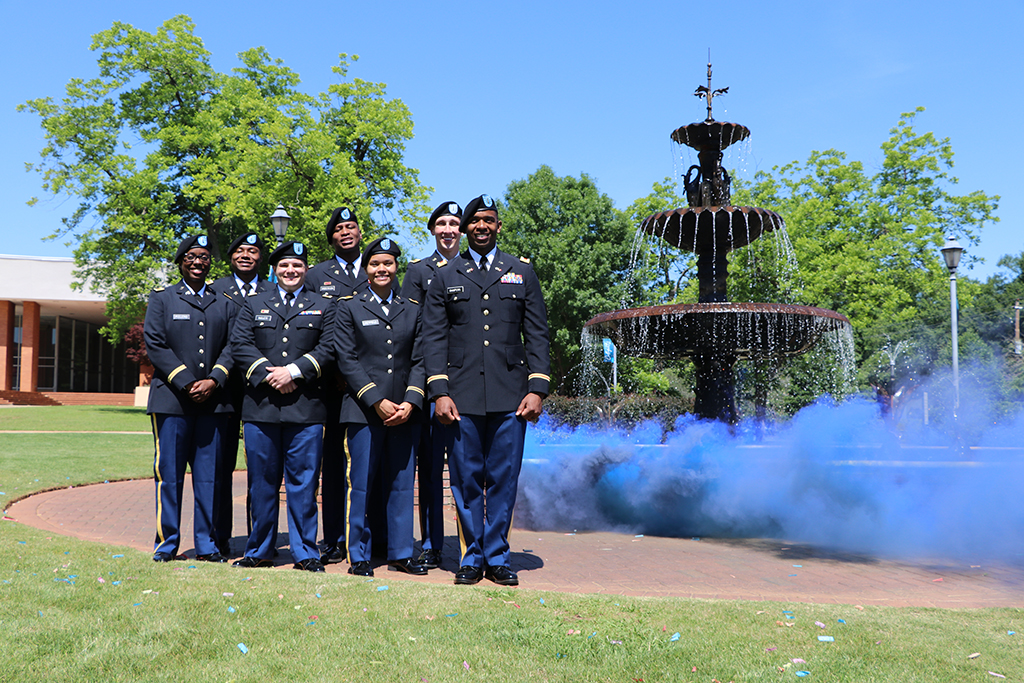 Lt. Col. Jeffrey Keenan was present during last year’s United States Army’s National Commissioning Ceremony before he officially started his position as professor of military science at Augusta University. Now, he said he feels truly fortunate to have shared the past year with his commissioning cadets.

“At this point last year, there were so many uncertainties regarding how the 2020-2021 school year would unfold,” Keenan said before the Army ROTC Commissioning Ceremony. “As a team, these cadets and our staff worked diligently to navigate through the obstacles of the last year in order to achieve our training objectives. This group represents the legacy of our program here at Augusta University … I know my cadre and staff are proud to have played a small part in their journey.”

“This group earned a lot of respect from the cadre and staff for how they conducted themselves during this period of uncertainty,” Keenan said. “We certainly relied upon them heavily in the fall semester as we set out to make changes to the program. This group shouldered the burden and represented the very best of what one would expect from an Augusta University Jaguar.”

Harvey, who graduated with a Bachelor of Science in Mathematics from the College of Science and Mathematics, attended AU for four years and had no prior military service before joining the ROTC program. He said his experiences at AU have been great.

“I had the opportunity to meet many people from different backgrounds; the professors in the Math Department are always willing to help and they care about the students,” said Harvey, who was pinned by his twin brother, Alique. They also have an older brother, Kareem Harvey, who served in the Marines, and younger brother, Rashaun Wilder, who is currently serving in the Army.

“My time in the ROTC program overall has been wonderful … I was able to learn, grow and develop myself as a leader. AU ROTC isn’t just an elective, because it has many opportunities for students in the program to be a part of,” Harvey said. “I was able to go to Florida with a team and compete in the Ranger Challenge Competition against other schools’ ROTC programs. I was also given the opportunity as a sophomore to attend the Air Assault School at Fort Benning, Georgia, to obtain my air assault wings. Both were great experiences in which I had a fun time, met new people and learned more about myself.”

After commissioning, Harvey plans to go on active duty as a Quartermaster Officer in the Army. Active duty starts the beginning of June at Cadet Summer Training as a cadre member. He will then attend Basic Officer Leadership Course before reporting to their permanent duty station.

Bumpers graduated with a Bachelor of Science in Kinesiology from the College of Education after spending over seven years on active duty in the Air Force. He said during his time, he deployed twice and had duty stations both abroad and stateside. Bumpers also enjoyed his time at AU after transferring from the University of Mary Hardin-Baylor in 2019.

“AU has a lot more diversity, a greater sense of community and an overall better collegiate experience,” said Bumpers, who had his wife, Maj. April Bumpers, conduct his oath of commission. His best friend, Capt. James Anderson, pinned his right shoulder and his mother, Angie Thomas, pinned his left shoulder. His mother-in-law, Betty Powers, an Army veteran, conducted his first salute.

“Augusta University was a perfect place to hone my skills and further prepare me for service as a second lieutenant … When I arrived at AU ROTC, I completed Cadet Summer Training and was a part of the senior class, so I used the time and opportunity that I had on my remaining contract to hone my skills.”

After commissioning, Bumpers will “take some time to celebrate” before heading to BOLC at Fort Gordon.

Both Harvey and Bumpers are appreciative of the cadre for their help and leadership.

“I am truly grateful that cadre is always present and willing to help … they have given me so much advice about what to expect as a new second lieutenant of the U.S. Army,” Harvey said. “With the many tasks and roles given in the program, cadre pushed me to my full potential. This allowed me to gain more confidence in myself and my ability to lead. I can certainly say that I feel more prepared now than I did a year ago.”

Bumpers said, “I would like to thank both former and present cadre for allowing me to grow and hone my leadership skills, with a special thanks to Capt. (William) Myers for the mentorship, knowledge and guidance. I appreciate the extra time that you took out to help me with planning and executing training.”

Keenan said he hopes the other students in the ROTC program have observed and learned plenty through their interactions and observations of the commissioning cadets.

“I believe the legacy of this senior class is grounded in their resiliency,” Keenan said. “Not only did they weather the challenges of the pandemic, but they help usher in a new era for the Jaguar Battalion. They were front and center leading change as we sought to better align program. They led by example as we instituted changes in how we trained and developed our students. I believe the entire program benefited from their leadership.”