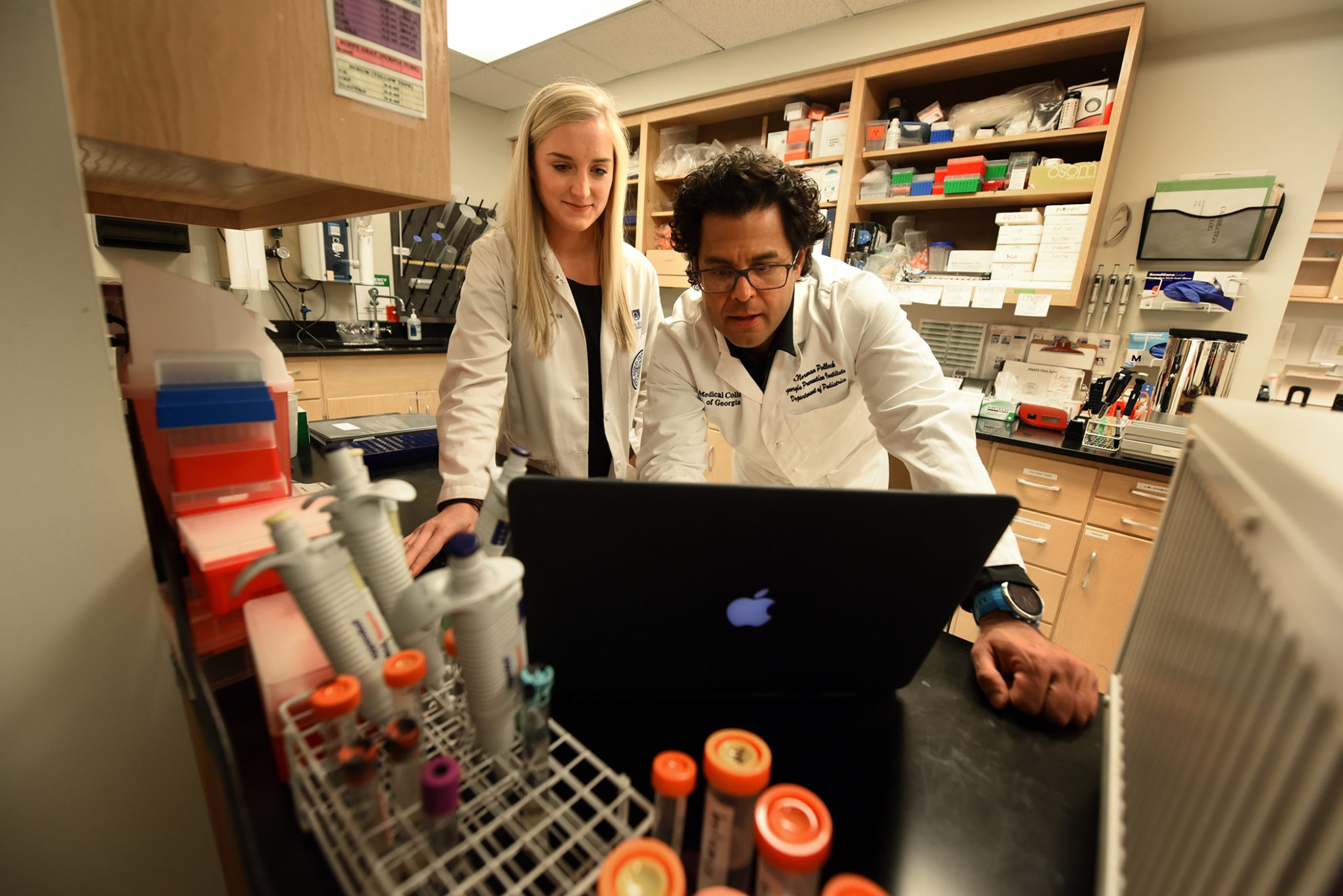 AUGUSTA, Ga. – High levels of a protein activated by vitamin K and associated with cardiovascular disease when it isn’t, has been found in the blood of African-Americans on dialysis, investigators report.

The work, published in the American Journal of Hypertension, indicates that these high blood levels of inactive matrix Gla protein, or MGP, may help identify those at highest risk for disease and who might benefit most from vitamin K supplementation, says Mary Ellen Fain, student at the Medical College of Georgia at Augusta University and the study’s first author.

Active MGP appears to be the only natural inhibitor of vascular calcification and vitamin K the only known activator of MGP.

When MGP is active, calcium also circulating in the blood, binds to it – instead of the lining of blood vessel walls – so it gets eliminated by the body.

“We know that the lifespan of patients on hemodialysis is reduced, that cardiovascular disease accounts for about half their deaths and that vascular calcification is a key contributor,” says Dr. Norman Pollock, bone biologist at MCG’s Georgia Prevention Institute.

“Key questions we want to answer include exactly how vascular calcification occurs in this very high-risk population of individuals and how we might better recognize, treat and ideally prevent these unhealthy changes to their blood vessels,” says Pollock, the study’s corresponding author.

Inactive MGP is what’s circulating in the blood, and the investigators measured those levels in 37 African-Americans on hemodialysis as well as 37 age and race matched healthy individuals. In people on hemodialysis, they also measured arterial stiffness as well as endothelial function, based on the ability of their blood vessels to perform basic functions like expand and contract in response to the body’s demands.

They found mean levels of inactive MGP were 5.6 times higher than in healthy controls and those high levels correlated with increased arterial stiffness and impaired endothelial function, Fain says.

She notes that like vitamin K levels, vascular calcification is difficult to measure directly, so they measured these two related indicators of cardiovascular health.

The MCG study appears to be the first to look at the relationship between circulating levels of inactive MGP and these markers in this very high-risk group. The deleterious impact on cardiovascular health they found held even after adjusting for other established risks like diabetes and high body mass index and blood pressure.

Next steps include recruiting both black and white adults with stage 3 to 5 kidney disease who are on hemodialysis to look at the cardiovascular impact of taking a vitamin K supplement daily for two months.

Just why the balance of active versus inactive MGP is off in these patients is unknown, but these individuals may simply need more vitamin K to maintain sufficient levels of active MGP, Pollock says.

He notes that their colleagues at R&D Group VitaK, at Maastricht University in The Netherlands, have shown that kidney dialysis does not affect vitamin K levels. Higher calcium levels in the blood also are not a guarantee of vascular calcification, Fain adds.

Heart disease and kidney disease are among the leading causes of death in the United States, according to the Centers for Disease Control and Prevention. African-Americans are among those at highest risk for both, and kidney failure significantly increases the risk of heart disease.

Vascular calcification occurs most extensively in individuals with chronic kidney disease, the investigators write, particularly in those on hemodialysis, which is considered lifesaving in patients whose kidneys have failed.

Vitamin K is active only about six hours after it’s consumed, and is found in green leafy vegetables like spinach, cabbage and lettuce as well as olive oil.

There’s increasing evidence that the vitamin, better known for its role in bone health, has a role in cardiovascular health as well. Calcium is typically important for strong bone, and that’s where we store most of it. It even normally helps blood vessels with their usual contraction and relaxation in response to your body’s demands. But with vascular calcification, there is a double whammy as calcium gets pulled out of bones so they get weaker, and deposited in blood vessel walls which become stiff.

Although not yet used clinically, the circulating, inactive MGP measured in the newly published studies is widely considered an indicator of cardiovascular risk. Additionally, measuring inactive MGP levels is the only way currently available to gauge vitamin K levels, which cannot be measured directly, Pollock says.

In October 2017, Pollock and Fain published a study in The Journal of Nutrition that showed otherwise healthy teens who consumed the least vitamin K had 3.3 times higher risk of an enlargement of the pumping chamber of their hearts and that the chamber pumped out less blood.

For more information about the clinical trial of a vitamin K supplement, call Celestine Williams at 706-721-8553.

The published research was supported in part by the American Heart Association.