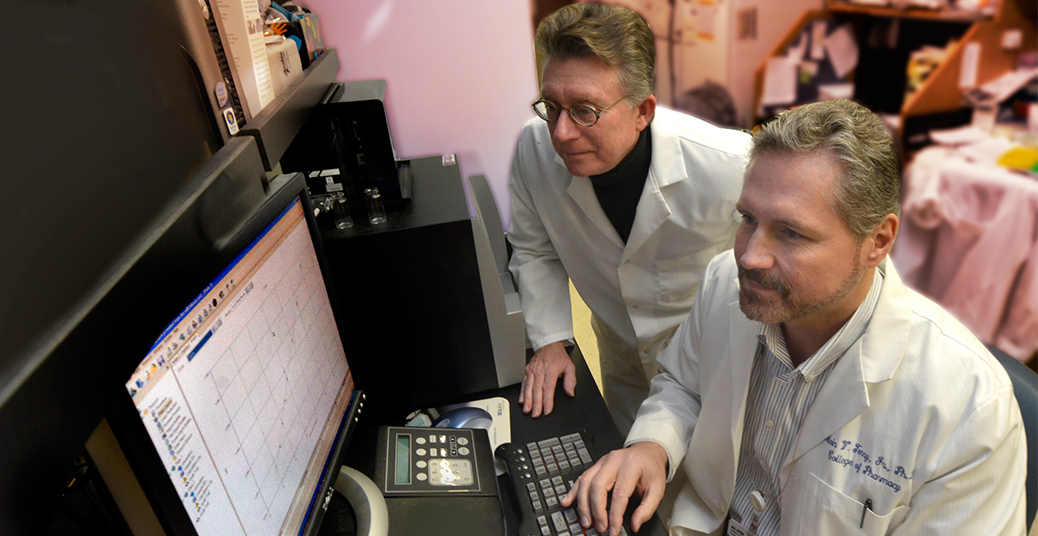 Nicotine’s primary metabolite supports learning and memory by amplifying the action of a primary chemical messenger involved in both, researchers report.

“This is the first hint of what the mechanism of the metabolite cotinine might be,” said Dr. Alvin V. Terry, Chairman of the Department of Pharmacology and Toxicology at the Medical College of Georgia at Georgia Regents University and corresponding author of the study in The Journal of Pharmacology and Experimental Therapeutics.

While the findings show therapeutic promise for a metabolite once thought to be inactive, cotinine’s benefits don’t hold up across all learning and memory systems so Terry is already looking at analogues that would be even more broadly effective and equally safe.

The new findings indicate cotinine makes brain receptors more sensitive to lower levels of the messenger acetylcholine, which are typical in Alzheimer’s, and may boost effectiveness, at least for a time, of existing therapies for Alzheimer’s and possibly other memory and psychiatric disorders.

The neurotransmitter acetylcholine is produced by cholinergic neurons, a target in diseases such as Alzheimer’s. The first sign of damage is these brain cells start pulling back the axons that connect them, then they die, Terry said. Most Alzheimer’s drugs, including the widely used Aricept, or donepezil, help patients maintain higher levels of acetylcholine longer by blocking an enzyme that breaks it down. “This could be an extra boost,” Terry said.

Nicotine has long been known to aid learning and memory, but it’s also highly addictive with a host of side effects from nausea and vomiting to increasing blood pressure and heart rate. The side effects reflect nicotinic receptors’ presence in other areas of the brain and body and explain why its therapeutic use has essentially been limited to helping smokers quit, Terry said.

The body doesn’t make nicotine or cotinine but when the body is exposed to nicotine, from smoking, chewing tobacco or gum, or wearing slow-release patches, the liver converts it to less noxious metabolites, primarily cotinine, that can be easily eliminated in the urine. In fact, insurance physicals often include a urine test for cotinine to ensure that a potential client is a non-smoker.

Working with Switzerland research and development company HiQScreen, Terry’s research team looked at frog cells with human DNA in them that enabled them to see if a compound binds with a receptor and what kind of response it generates. They found a narrow range of cotinine concentrations that amplify the effect of the natural neurotransmitter acetylcholine.

“It works in conjunction with acetylcholine to improve learning and memory,” Terry said. Cotinine activated some of the same receptors. In related studies in rats, they also found cotinine has a synergistic effect with the commonly used Alzheimer’s drug Aricept or donepezil, which, as with most drugs for the disease, work to improve acetylcholine survival by blocking an enzyme that breaks it down. The researchers noted that it did not take a deficit in cholinergic activity, as might be found in Alzheimer’s or advanced age, to make the duo effective, a finding which potentially widens its therapeutic potential.

“It’s like a booster,” Terry said. “The holy grail is to keep acetylcholine receptors functioning.” Cotinine essentially had no effect on wide range of other pharmaceutical targets including receptors for other neurotransmitters such as dopamine and serotonin.

Cotinine was also helpful in some models that predict antipsychotic behavior, called prepulse inhibition. Patients with Alzheimer’s as well as psychiatric conditions such as schizophrenia may have trouble controlling themselves on many different levels. “One of the things that gets people put in a nursing home very commonly is psychiatric outbursts,” Terry said. “As your brain degenerates, Alzheimer’s is not just a disease of cognition. Some patients hallucinate, some have delusions, as well as aggressive behavior sometimes,” Terry said.

Cotinine has already been shown by Terry and others to be generally protective of brain cells. When brain cells are placed in a dish with amyloid, the infamous brain plaque found in Alzheimer’s, cotinine keeps them from being killed.

Terry and longtime collaborator, the late Dr. Jerry Buccafusco, found in the early 1990s that despite the short half-life of nicotine – about a half hour – monkeys taking the drug continued to benefit from memory improvements days later. That had them wondering if possibly some longer-lasting nicotine metabolite could help explain the unexpected, lasting effect. They began looking at nicotine’s major metabolite, cotinine, which has a half-life of about 18 hours, and were among the first scientists to document its positive effects in the brain.

“The body pretty much views nicotine as a poison, something unnatural that needs to be eliminated,” Terry said. “It’s a classic reaction where nicotine is converted to cotinine through an oxidative process in your liver.”

Even when purified nicotine just sits on a shelf for a few months, a natural oxidation process occurs that will convert a percentage of it to cotinine, just not as efficiently as the liver, he said. “Where there is oxygen around, there is going to be a very small amount of it formed anyway. But the liver is much more efficient at making that conversion.”

Nicotinic receptors in the brain and elsewhere got their name because nicotine was the first substance scientists found that binds to them but they are actually one of two receptor types in the body for the neurotransmitter acetylcholine.

The research was supported by the National Institutes of Health. MCG Research Scientist Patrick M. Callahan is a study co-author