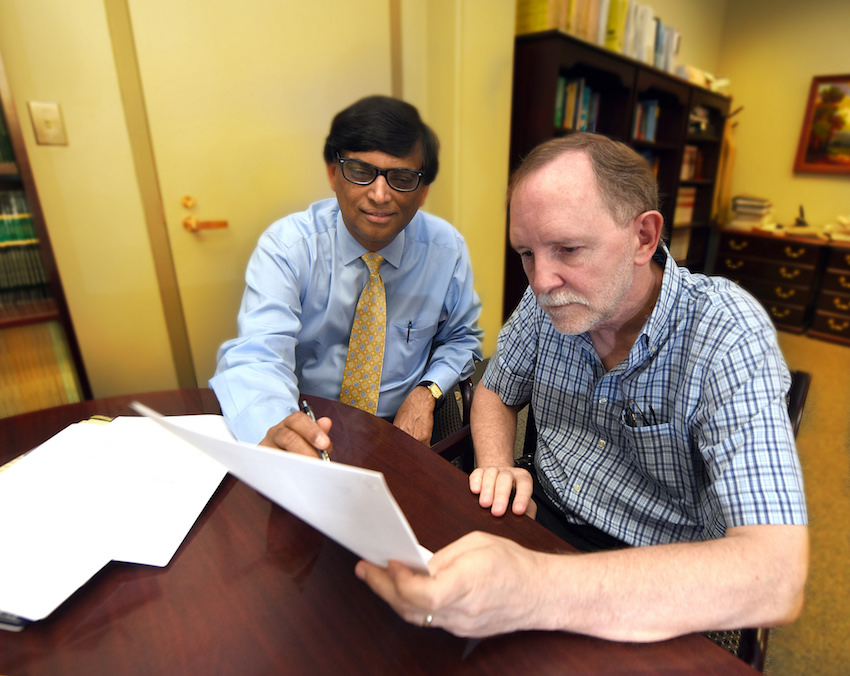 A new Department of Population Health Sciences has been established at the Medical College of Georgia at Augusta University to strengthen the public medical school’s impact on the health of Georgia.

The new department initially combines the MCG Department of Biostatistics and Epidemiology and the Georgia Prevention Institute, two groups with a common interest in this area and a long history of collaboration.

It will give researchers and educators a more comprehensive perspective on which Georgians are getting sick, what they have and why, and which targeted interventions and treatments are most effective for them, says Dr. Varghese George, chair of biostatistics since 2005 who leads the new department that became effective July 1.

The broadened perspective will translate to expanded research and training opportunities in this developing field that enables better insight into the public health problems of varying groups of Georgians – from stroke to obesity – and how best to address them, says the new chair.

“We don’t understand the underlying mechanisms of why some groups get a disease and others don’t,” he says. “Those kinds of questions have to be addressed if we really want to help society as a whole.”

“If you look at public health measures in Georgia they are some of the worst in the country,” says Dr. David C. Hess, dean of MCG and executive vice president for medical affairs and integration at AU. As examples, America’s Health Rankings put the state 31st and 32nd, respectively, in physical inactivity and obesity, 41st in air pollution, 46th in lack of health insurance, 46th in low birthweight babies, 36th in cardiovascular deaths and 37th in premature death.

“As Georgia’s public medical school we have done a really good job taking care of individual patients and families, of educating physicians and with biomedical research to better understand and treat disease,” Hess says. “Now we have to get to these underlying, fundamental problems that if we don’t correct are going to continue and probably get worse,” says the dean, who was named in April and made establishing the new department a priority.

“By pulling these areas and people together and bolstering them, we can begin to help make a bigger dent in key issues affecting our state.”  As a stroke specialist, for example, Hess’ own initiative to use the internet to eliminate distance as a factor in timely stroke care has helped a lot of individual patients and families, but Hess hopes these newer initiatives with population health sciences will enable the state’s public medical school to also better help prevent strokes. Georgia’s low health rankings include being in the middle of the stroke belt that covers much of the southeastern United States.

Combining biostatistics, epidemiology and the GPI makes sense because of the overlap of strengths as well as new opportunities to address these kinds of complex health issues, echoes Dr. Gregory Harshfield, who has directed the GPI since 2005. “From my perspective, it moves us to a new level,” says the researcher who is vice chair of the new department that encompasses three divisions.

Dr. Shaoyong Su, genetic epidemiologist at the GPI, is interim chief of the Division of Epidemiology, which looks at disease incidence and distribution. Epidemiology will be one of the first areas expanded, George says.

The GPI, which combines basic and clinical science to explore disease prevention and intervention with topics like how exercise impacts the physical and mental wellbeing of chubby children and why some groups are salt sensitive, will continue under Harshfield’s direction as the third division.

The new department also will enable MCG to build stronger relationships with groups such as the Atlanta-based Centers for Disease Control and Prevention, the Georgia Department of Public Health as well as county and district health departments, Hess says, of the agencies, which have been successful at examining and addressing larger health issues like the frontline work health departments are doing in hypertension.

“The medical school I think could be a bridge between these different agencies. We want to work more with them and learn a lot more from them,” he says.

Educational additions for the new department will include adding an executive master’s degree in epidemiology and a master’s in data science, with tracts in genomics and cybersecurity. New training programs in population health sciences will cut across all aspects of the new department, George says. He plans to pursue a training grant from the National Institutes of Health to support doctoral and postdoctoral training programs. The Department of Biostatistics and Epidemiology already offers a master’s and doctorate in biostatistics and trains postdoctoral fellows. There also are master’s and certificate programs in clinical and translational science.

Parallel initiatives on campus include AU’s Center of Rural Health, established by President Brooks Keel in December 2016, for the university to aid survival of rural hospitals. Health care access is a huge determinant of health for many portions of our largely rural state, and the availability of nearby hospitals and physicians are anchors for good health, Hess says.

Dwindling rural hospital numbers and an already significant and worsening shortage of physicians in Georgia – in both primary care and a wide range of other specialties – must be addressed in the quest for a healthier state, the dean says.

Hess also has appointed Dr. Doug Patten, associate dean of MCG’s Southwest Campus, and Denise D. Kornegay, executive program director of the Georgia Statewide Area Health Education Centers Network, as co-chairs of the new Task Force on Improvement of Overall Health Status for Georgia. The still-forming group of seven to 10 members will do just what the name implies: take a comprehensive look at the state and formulate a strategy. The asks out to potential committee members include representatives of Mercer University School of Medicine, Morehouse School of Medicine, the CDC and the Georgia Department of Public Health.

“We want to know what else we can do as a medical college that will influence the health of our state,” Patten says. While MCG clearly helps provide physicians for Georgia, we want to also target major health concerns and health disparities, Patten says.