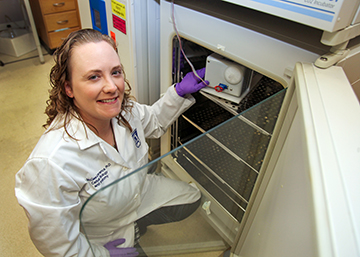 Extended time in space weakens astronauts’ bones, so scientists are working to better understand how bone senses and responds to the usual forces placed upon it with the goal of keeping their bones strong.

The skeleton’s ability to adapt to mechanical loading — the forces put on bone by both gravity and muscle in response to movement — is critical to bone health, and circumstances like spaceflight or a spinal cord injury can interfere, says Dr. Meghan E. McGee-Lawrence, biomedical engineer in the Department of Cellular Biology and Anatomy at the Medical College of Georgia.

“It’s a problem for the astronauts who are on the International Space Station for long periods of time, and it’s going to continue to be a problem for eventually trying to send astronauts to Mars,” McGee-Lawrence says. It’s also a problem here on Earth following a spinal cord injury, a protracted period of bedrest and for an inactive population of any age.

McGee-Lawrence just received a $750,000 grant from NASA to help her better understand how lack of gravity and other causes of disuse affect the usual dynamics of the skeleton, and ways to restore a healthy dynamic when usual options like increased physical activity and weight lifting are not viable.

“If we can find a way to make bone more sensitive to mechanical loading, then we would be able to increase bone mass with less effort. That is a long-term goal,” she says.

Her focus is the natural sensors of mechanical loading on the bone called osteocytes. They are the most common cell in the bone, and McGee-Lawrence’s lab was the first to report that tears, called plasma membrane disruptions, occur in osteocytes with mechanical loading, and that, when all goes well, the result is healed tears and building bone.

They have shown that plasma membrane disruptions happen in healthy osteocytes in under a minute in response to load and immediately initiate changes like letting in more calcium, which in turn alters expression of molecules that regulate the activity of bone-forming osteoblasts and bone-consuming osteoclasts.

Calcium found in abundance in the extracellular fluid around osteocytes rushes through the new opening where the mineral, best known for building strong bones and teeth, instead functions as a call to action for these cells.

When there are few tears and little mechanical loading, the message to osteoblasts is that denser bone is not needed and the osteoclasts will resorb some of the bone matrix. Conversely, when osteocytes sense a lot of loading and tearing, they will instruct osteoblasts to shore up bone density and osteoclasts to cut back on resorption.

Her lab has shown that just roaming around in cages produces some tearing in the long bones of mice, which, like those in our legs, support our weight and enable us to move. That baseline suggests that these tears are part of the routine response to everyday gravitational pull, she says, and one of the reasons that astronauts struggle with bone loss in space.

So they are looking directly at what happens to plasma membrane disruption formation and repair in osteocytes in response to disuse. They also are looking for ways to normalize this apparently essential process in maintaining healthy bone in the face of disuse that occurs in space as well as on Earth.

“What we hope to know is how is this membrane disruption mechanism affected by disuse and does that contribute to the bone loss that is experienced with disuse and, if so, can we do anything to reverse those processes,” she says. “Can we do something to the osteocytes to make them either more likely to experience tears or more likely to repair those tears and then, accordingly, make it so there is less bone loss during disuse.”

She and her colleagues have some evidence that fewer tears are not good and want to further explore what happens to the repair rate with disuse.  They also want to know the best healing rate: Does slow repair increase osteocyte survival, or does survival improve with speedy repair?  It’s certain that if tears don’t heal, osteocytes don’t survive.

“The good news is we can dial it in either direction,” she says. But they theorize that faster repair is not necessarily better because they suspect that the amount of calcium that comes in correlates with the cell’s response to the tear.

“Think of a membrane disruption as a doorway into the cell. If you slam the door too quickly, then there is not enough time for the cell to sense that tear and initiate the signaling to respond,” she says.

Since they already know a fair amount about the molecular machinery that helps tears heal, they already have some genetic and pharmacological ways to alter both how susceptible an osteocyte is to tearing and how quickly it repairs. She thinks proteins involved in repairing membrane tears, like PRKD1, which resides in the cell membrane and is an early arriver to a tear site, are logical targets for both.

“The ultimate goal is can we come up with a way, whether it’s a drug therapy or a different type of regimen that can make these processes work better in astronauts and people on earth who are subjected to disuse as well,” she says.

Despite countermeasures like resistance training, astronauts are known to lose 1-1.5% of their bone mineral density in weight-bearing locations, like the hips and knees, per month, she says, and the projected seven-month journey to Mars likely will mean every astronaut develops osteopenia, a weakening of the bone mass that typically occurs with age, and 80% will develop osteoporosis. “That is really a problem. Not only are they losing bone actively while they are in space, at some point they have to come back to gravity… and then what happens?” she says. Studies suggest it’s a long road to bone recovery for astronauts despite being physically fit when they leave.

So she and her research team also are chronicling what happens to tearing and repairing with resumed use and how that correlates with bone strength in their animal model. In keeping with what astronauts experience, they have evidence that while resuming use may help, osteocytes are less likely to repair and survive tears after a long period of disuse.

There are effective therapies, like bisphosphonates, that can help age-related bone loss, but they have not been shown to be effective when disuse is the primary driver. “That is why we need to come up with better targets, more effective targets, to try to prevent disuse-induced bone loss,” she says.

McGee-Lawrence has worked with now-retired MCG cell biologist Dr. Paul McNeil, an expert in plasma membrane repair, who has documented the rush of calcium inside a cell when a tear happens in numerous cell types, including muscle cells. Muscle cell membrane tear and repair is key to how muscles grow in response to weight lifting.

While it has long been clear that mechanical load also translates to stronger bones, just how remains a question, she says. Like what McNeil explored with muscle, she suspects the plasma membrane tears are key.

“We think the formation of these tears is important for how the bone cells know they are being exposed to that level of loading,” she says, particularly of high-impact loading resulting from running and jumping. “Cells need a way to know what is going on outside their cell membrane. This is one way to do that.”

Each star-shaped osteocyte has 50 to 60 arm-like processes, similar to the dendrites of nerve cells, which enable it to sense what is going on around it, communicate with other osteocytes as well as the osteoblasts and osteoclasts. As with many cell types, osteocyte numbers decline with age along with your bone’s ability to respond to the weight, or lack of loading, put on it.

Osteoporosis is called a silent disease because typically there are no symptoms until a bone breaks or vertebrae collapse, according to the Osteoporosis and Related Bone Diseases National Resource Center of the National Institutes of Health. It affects both genders and all racial and ethnic groups and can happen at any age, although risk increases with age. Inactivity and smoking also increase the risk and some medications, like corticosteroids, can as well.

NASA has plans for putting a woman and a man on the Moon for further exploration by 2024 and to establish a permanent human presence there within a decade. What NASA learns from those extended space visits as well as from their rover explorations of Mars — a new rover called Perseverance is scheduled to land today, Feb. 18 — will help better prepare for eventually sending astronauts to Mars, the fourth planet from the Sun.