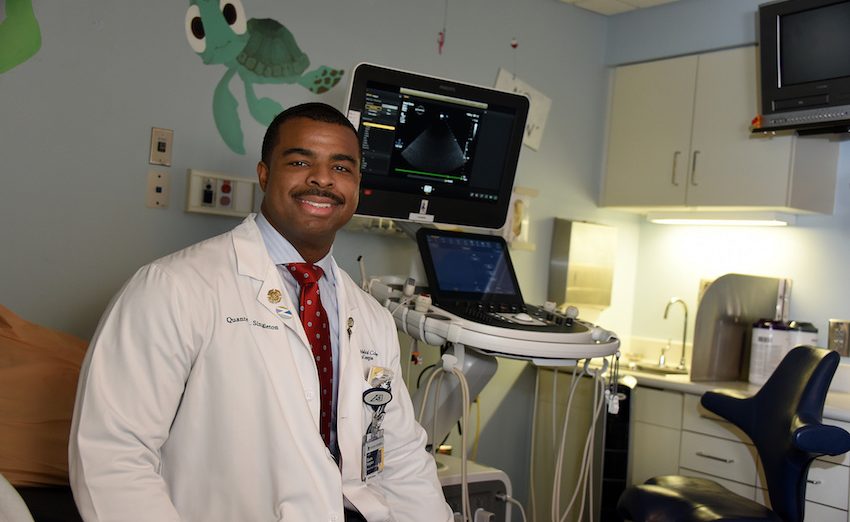 Quante Singleton, a third-year medical student at the Medical College of Georgia at Augusta University, says that he always knew he wanted to be a physician, even if he wasn’t sure how he was going to become one.

“Growing up, I knew what I wanted to do, but I never saw a lot of doctors that looked like me, so I didn’t have exposure to those role models,” says the winner of a 2017 American Medical Association Foundation Minority Scholars Award. “And when I finished high school, I knew it was time to get a job and go to work.”

That work landed him at the Atlanta Fire Rescue Department, where he spent nine years protecting the residents in one of Atlanta’s roughest neighborhoods. He also found continued inspiration there.

“I saw a lot of sickness and poverty in that neighborhood, and a lot of people didn’t even have access to health care,” he said. “I wanted to be able to help in some way.”

Singleton enrolled at Clayton State University and worked 24-hour shifts several times a week at the fire department throughout his four years of undergraduate education. He was intent on finally applying to medical school when he graduated and says the time was right, even if he needed few pushes to realize it.

“I got trapped in a burning building, something that the 18-year-old me didn’t really consider could happen when I chose this career,” he says. It made him think about all the things he hadn’t done personally and professionally and helped him make up his mind to pursue his dream of becoming a physician.

“When I’d made the decision to finally go (to medical school), I was talking with a coworker about the one thing I’d never gotten to do as a firefighter,” he said. “I’d pulled a lot of people out of fires over nine years, but none of them ever survived. I wanted, for once, to rescue someone and have them live.”

It happened that very night. In 2013, he and a colleague received Atlanta Fire Rescue’s Medal of Valor for rescuing an elderly Alzheimer’s patient from a burning home.

Singleton enrolled at MCG in 2015 and hopes to match with an orthopaedic surgery residency program when he graduates in 2019. It’s a career that piqued his interests after he was treated for a torn anterior cruciate ligament…twice. He says he’d like to eventually practice in Atlanta and “eventually open up some free clinics” in the neighborhood where he worked as a firefighter.

He served as president of the MCG student Orthopaedic Interest Group from 2015-16 and has been active in the MCG Chapter of the Student National Medical Association.

The American Medical Association Foundation Minority Scholars Award, presented in association with Pfizer Inc., rewards personal commitment to improving minority health and scholastic achievement in the form of tuition assistance to groups defined as historically underrepresented in the medical profession. Singleton is one of 25 students to receive the award, which provides $10,000 toward tuition.