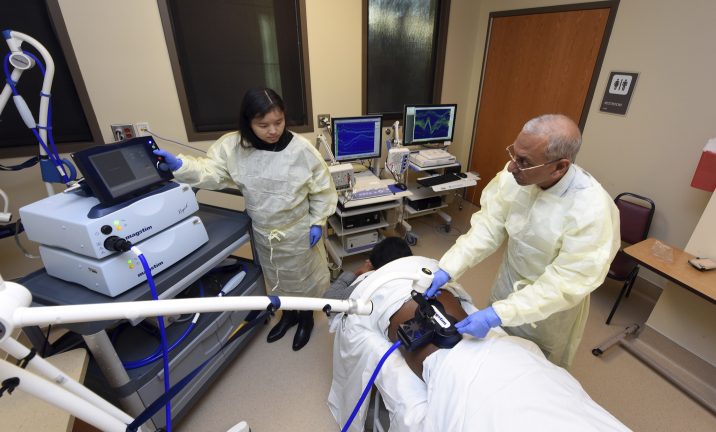 A low-cost, noninvasive treatment that uses the power of the magnet to stimulate and heal nerves key to bowel control is under study for the disabling and common problem of stool leakage, or fecal incontinence.

The technique, translumbosacral neuromodulation therapy, or TNT, has shown early promise in strengthening connections between nerves and muscles that enable us to control stool release, and now a larger study is helping nail down the optimal dose and give investigators more insight into just how it works.

Investigators at the Medical College of Georgia and Augusta University Health System as well as Harvard University’s Massachusetts General Hospital in Boston are exploring the potential of magnetic stimulation in 132 patients, including 44 participants receiving a “sham” treatment that looks and even sounds the same as the real thing, to help assess its efficacy and safety.

Effective, noninvasive therapies are lacking for fecal incontinence, which affects about 40 million Americans, particularly women, often because of childbirth trauma to that area of the body, as well as the elderly, including about half of nursing home residents, says Dr. Satish S.C. Rao, director of neurogastroenterology/motility and the Digestive Health Clinical Research Center at MCG.

Rao is project director and principal investigator on the new studies funded by a five-year, $4.2 million grant (R21DK104127-02) from the National Institute of Diabetes and Digestive and Kidney Diseases.

Fecal incontinence, in which stool leaks from the rectum with little or no warning, has a major impact on quality of life, and mortality in older people and is associated with social isolation, depression and anxiety, says Rao. Now investigators want to see if the power of magnetic stimulation, already in use for problems including depression, can help reconnect the spinal cord nerves, brain and gut and help patients regain control of their bowels.

“We were therefore keen to study whether magnetic stimulation applied to the nerves in the back that control bowels would improve fecal incontinence,” says Rao, who pioneered a special device and technology to enable these first in the world studies in fecal incontinence.

The new studies are enabling investigators to further explore just how TNT works and how often it’s needed to correct, or significantly reduce, this common problem.

They are giving the painless TNT sessions once a week over six weeks to 88 patients at a dose of either 2,400 or 3,600 magnetic stimulations at 1 hertz — the frequency per second — and performing the lookalike sham on 44 others.

The investigators theorize and have evidence that magnetic stimulation, particularly at the higher dose of 3,600, helps correct what is wrong with the nerve-muscle connection.

Bottom lines include whether participants experience a 50% or greater reduction in episodes of stool leakage, like those in an earlier, smaller study. They also will look at related factors like the consistency of the stool, the severity of fecal incontinence episodes, rectal sensation, quality of life and examine nerve function and gut and brain interactions.

To further assess its long-term efficacy, the investigators are evaluating whether reinforcement treatment helps and how long the effects last. So they will examine 88 patients again at 12, 24 and 48 weeks and assess whether the actual treatment, rather than the placebo or sham, improves leakage.

They expect that those who get the most benefit from TNT will be those who receive the actual TNT, especially the higher dose, and the subsequent therapy. If findings continue to hold, the next step would be a larger, final-stage multicenter clinical trial, Rao says.

The magnet in TNT produces energy that’s converted to electrical energy, which jumpstarts nerves, Rao says. Activated nerves then send the message to muscles in the anus that they need to hold onto stool.

“We are invoking the principle of neuroplasticity, the ability of damaged nerves to reconnect, regrow and adapt and improve connectivity with the muscles and thereby improve bowel function,” says Rao.

While many therapies have focused on strengthening muscles, or surgically repairing torn muscles, Rao has increasing evidence that for many a major problem is that the nerves which control the muscle have been damaged, and this nerve injury, or neuropathy, is a significant factor in fecal incontinence.

These kind of improvements provide patients freedom to reengage in their lives without always having to know the location of the closest bathroom, says Rao.

The only side effects patients have reported to date is some temporary tingling in the treatment area, likely prompted by rejuvenated nerves, Rao says.

Participants in the new study will have gut and brain function evaluation, the TAMS test and anorectal manometry to assess improvement before and after therapy and to assess nerve function and stool control. They will keep a daily electronic stool diary, which includes both normal bowel movements and leakage.

Fecal incontinence affects about 1 out of 3 people who see a primary care provider, according to the NIDDK. It is more common in people over age 65 and in those who are inactive, have other chronic health problems like irritable bowel syndrome and diabetes, smoke, and have had their gallbladder removed. Up to half of patients have both fecal and urinary incontinence.

TNT, in fact, may also benefit problems like urinary incontinence resulting from pelvic floor disorders, which affect muscles at the base of the abdomen key to releasing and containing feces and urine, Rao says. It holds promise as well for patients with spinal cord injuries and movement disorders like Parkinson’s who can no longer control their bowel and/or bladder function.

Efforts like diet modifications, medications and muscle strengthening exercises are largely ineffective, and the invasive sacral nerve stimulation, which requires an operating room and anesthesia, has shown some success but with complications including the need to remove some devices.

Rao is also helping lead a federally funded initiative that will provide the first head-to-head comparison of the benefits, side effects and costs of three Food and Drug Administration-approved treatments, including sacral nerve stimulation, already in regular use.

The $18.8 million five-year study, also funded by the National Institutes of Health’s NIDDK, also is underway at MCG and AU Health as well as three other sites nationally that are referral centers for fecal incontinence.

Find more information on the new study here or contact research associates Karunaratne or Eubanks at 706-721-1968.