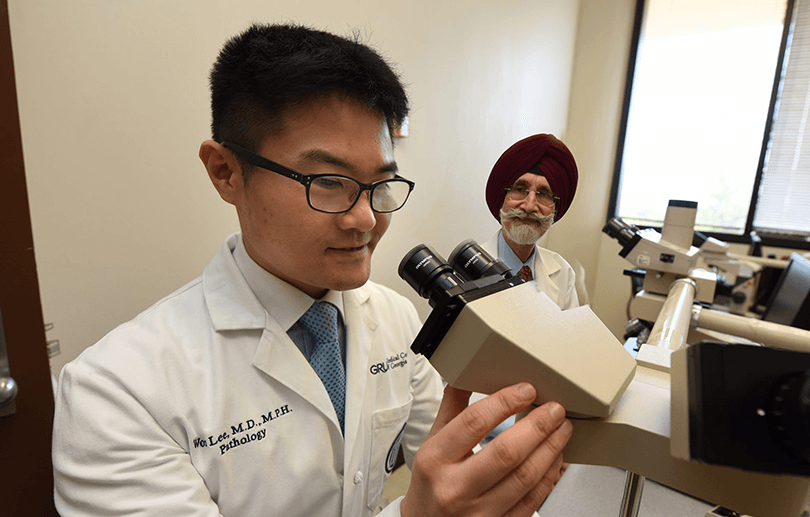 AUGUSTA, Ga. (July 13, 2018) –When it comes to diagnosing a condition in which the plasma cells that normally make antibodies to protect us instead become cancerous, it may be better to look at the urine as well as the serum of our blood for answers, pathologists say.

The condition is monoclonal gammopathy, in which immune cells called plasma cells start making just one immunoglobulin, or antibody, instead of their usual vast array. The result can be the cancer multiple myeloma.

“When you test the serum, we suggest you also test the urine whenever you suspect that somebody has a tumor of the plasma cells,” says Dr. Gurmukh Singh, vice chair of clinical affairs for the Department of Pathology at the Medical College of Georgia at Augusta University.

The decades-old urine test is still used by pathologists and requested by physicians, but its use declined when the serum free light chain assay became available about a dozen years ago, Singh says, and some physicians may now think that the urine test is redundant. The different tests look in the serum or urine for signs of the abnormal antibody, and to see if the usual ratio is off for  two types of a portion of the antibody, called light chains.

The new study, published in the Journal of Clinical Medicine Research, indicates that if the multiple myeloma is associated with the type called the lambda light chain, there is about a 25 percent chance the problem will not be detected by the serum test for free light chains, the investigators report from their retrospective review of tests on 175 patients.

“If you have a lambda chain-associated lesion and you don’t do a urine study, just rely on the serum free light chain assay, about 1 out of 4 times, the assay will tell you that you don’t have anything when you actually do,” says Dr. Won Sok Lee, fourth-year pathology resident at MCG and AU Health and the study’s coauthor.

Plasma cells are immune cells that live in our bone marrow and produce immunoglobulins, antibodies that attach to and attack invaders. When the plasma cells go bad, they instead start producing a single, dysfunctional immunoglobulin.

The Y-shaped immunoglobulins are comprised of pieces of protein called “heavy” and “light” chains and, as the name implies, the light chains are literally lighter. Light chains have two different types, kappa and lambda, which are distinctive in their amino acid sequence. We normally make about twice as many kappa light chains, but cancer can affect both light chains.

In multiple myeloma, the relevant light chain production goes up but kappa goes up a lot more, says Singh, the study’s corresponding author and Walter L. Shepheard Chair in Clinical Pathology at MCG.

Sometimes their ratio stays normal even when an abnormal lambda immunoglobulin is showing up in the urine.

Conversely, nearly 40 percent of patients have an abnormal ratio without having monoclonal gammopathy, the investigators write.

These variabilities mean some patients, particularly those with the less-common lambda chain-associated lesions, could go undiagnosed, Lee says.

“You may go undiagnosed because the serum free light chain test either is not picking up those abnormal proteins or the lambda lesions don’t make that many excess abnormal proteins,” Singh notes.

Underdetection of the lambda light chains floating in the serum may account for the false negative ratio found in about 25 percent of patients who clearly had an abnormal antibody produced by a lambda lesion present in their urine, the investigators report.

Underproduction of lambda free light chains in these patients likely accounts for another 5 percent of false negatives, they write.

In fact, the kappa/lambda ratio showed excess kappa chains in about 90 percent of the patients who had an abnormal ratio without a tumor of the plasma cells, the investigators say.

With lambda chain-associated lesions, the ratio is not abnormal nearly as frequently. In fact, there is a high false negative rate for a lambda-dominant ratio in monoclonal gammopathies associated with lambda chains, they write, possibly due to the under-detection of lambda light chains in the serum.

Therein lies the problem with not looking for errant antibodies and light chain ratios in the urine, Lee says. Ratios can look normal in the serum, while the urine has monoclonal lambda chains.

“If it’s in the urine, you are making abnormal free light chains,” Lee says. Conversely, the ratio can look abnormal in the serum in people who don’t have cancer.

Although more costly, the urine test is a better diagnostic tool in this case, because it enables the pathologist to give better information back to physicians and patients, Lee says. He notes that kappa lesions are more common.

Examination of serum free light chains is currently recommended for diagnosing and monitoring monoclonal gammopathies, although, the investigators write, there are differing opinions on its usefulness.  If initial tests indicate a problem, a bone marrow biopsy is typically performed to confirm a diagnosis.

Excessive light chains produced normally are easily excreted in the urine because of their small size. With monoclonal gammopathy, some of the excess light chains can get trapped in the kidneys and damage kidney function.

Early symptoms of monoclonal gammopathy can be nonspecific, like feeling poorly, and if it becomes cancer, one of the first symptoms may be a fractured bone because the cancerous cells have started consuming bone, Singh says. Anemia, an increase in serum calcium and kidney failure are other symptoms.