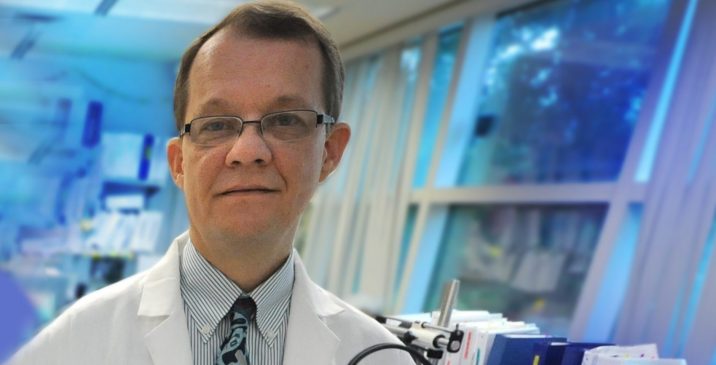 Dr. Lawrence C. Layman, chief of the Section of Reproductive Endocrinology, Infertility and Genetics in the Department of Obstetrics and Gynecology at the Medical College of Georgia at Augusta University, is the 2019 recipient of the American Society for Reproductive Medicine’s Distinguished Researcher Award.

Layman, Robert B. Greenblatt, MD, Distinguished Chair in Endocrinology and co-director of the MD/PhD Program of MCG and the University System of Georgia, was selected for his basic and clinical research efforts to significantly advance the understanding of genes important in the process of reproductive development, sexual differentiation, puberty as well as the function of other organs. He was honored at the society’s recent Scientific Congress in Philadelphia.

Layman’s clinical expertise includes delayed puberty, infertility, recurrent pregnancy loss and menopause. A prolific physician-scientist, his current studies include the National Institutes of Health-funded genetic analysis of hundreds of patients with MRKH Syndrome, where the vagina and uterus do not develop. He is co-principal investigator on a National Heart, Lung and Blood Institute grant looking at the impact of estrogen on vascular health in diabetes.

He is the American Society for Reproductive Medicine’s liaison to the American College of Obstetrics and Gynecology’s Committee on Genetics and a member of the society’s Research Task Force and Research Steering Committee. He served as a society board member from Oct. 2017-Oct. 2018. He is a board member and past president of the Society for Reproductive Endocrinology and Infertility and a founding member of the American College of Medical Genetics. Layman was elected to membership in the international Association of American Physicians for leading senior physician scientists in the United States, Canada and elsewhere in early 2019.

He is the author or coauthor of 112 journal articles, and has been honored three times by MCG for his clinical science research.

Layman is a member of the Reproductive Endocrinology & Infertility Division of the American Board of Obstetrics and Gynecology. He is program director of the reproductive endocrinology and infertility fellowship at MCG and has mentored 86 medical students, residents and fellows.