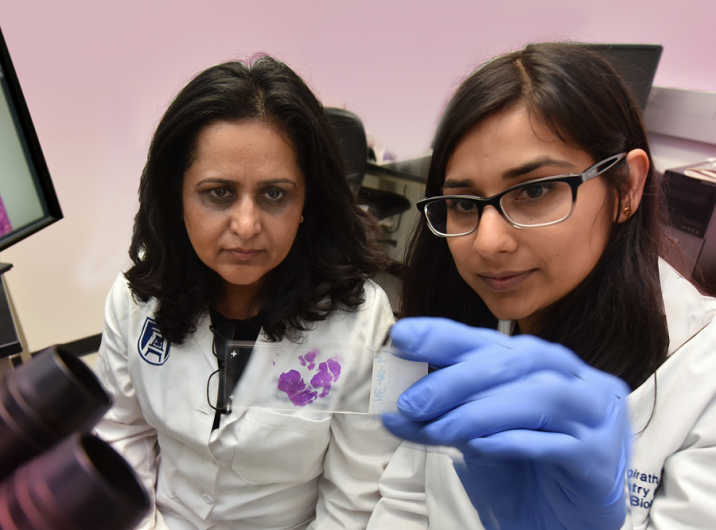 A transcription factor that aids neuron function also appears to enable a cell conversion in the prostate gland that can make an already recurrent cancer even more deadly, scientists say.

BRN4 is mostly expressed in the central nervous system and inner ear, but now scientists have the first evidence it’s amplified and overexpressed in patients with the rare but increasing neuroendocrine prostate cancer, they report in the journal Clinical Cancer Research.

As their name implies, neuroendocrine cells also are more common in the brain, but the walnut-sized prostate gland also has a small percentage of them and they appear to become more numerous and deadly in the face of newer, more powerful hormone therapy.

The sex hormone androgen is a major driver of prostate cancer so hormone therapy to suppress it or its receptor — called chemical castration — is a standard frontline therapy, says Dr. Sharanjot Saini, cancer biologist in the Department of Biochemistry and Molecular Biology at the Medical College of Georgia at Augusta University.

Still as high as 40 percent of patients develop castration-resistant prostate cancer within a few years. This more aggressive cancer is harder to treat, and patients may get a newer, more powerful hormone therapy like enzalutamide, which was first approved in 2012 for this recurring prostate cancer.

But in the face of this additional, more aggressive treatment, a subset of these luminal cells will differentiate into neuroendocrine prostate cancer, a still-more aggressive disease, says Divya Bhagirath, MCG cancer biologist and the study’s first author.

Scientists had no clear idea of how the deadly conversion happens, how to know it’s happening or what to do when it does happen until now.

By comparing tissues from both patients with and without this more rare prostate cancer, the scientists found that it was BRN4 overexpression and interaction with another transcription factor in the same family, BRN2, driving the prostate cancer cells to become neuroendocrine prostate cancer cells. BRN2 had already been implicated in this cancer, but the MCG investigators found BRN4 was at much higher levels and appeared to be the instigator, Bhagirath notes.

They found that enzalutamide, which blocks androgen receptors, also augments release of these two transcription factors — more of the BRN4 — in traveling exosomes, which are essentially nano-sized suitcases in which cells swap components and communication. In this case, the exosomes deliver to luminal cells what they need to become neuroendocrine prostate cancer cells.

Their findings indicate that BRN4 could be a good target to prevent this deadly differentiation and that the exosome content could be good indicators that the transformation is happening. When they blocked the exosome release, for example, the sharing and transformation stopped and the neuroendocrine prostate cancer cell conversion was limited to just a few cells, Bhagirath says.

Neuroendocrine prostate cells naturally have some level of BRN4 but the luminal cells that become these cells do not, she notes. “Because this particular cell type has neuro features in it, the transcription factors associated with the neuro features are there,” Bhagirath says.

It’s the treatment that changes the transcription factor mix, the scientists agree, and it likely happens in other cancers as well. But not having the treatment likely increases the risk of dying from the castration-resistant prostate cancer, another reason other targets and options are needed.

Exosome inhibitors are under study and the MCG investigators would like to develop one for BRN4.

Transcription factors are molecules that help determine the activity of a gene — up or down — as well as important factors like rates of cell division and death. Cancer generally turns up cell division and turns down natural cell death pathways.

The scientists note that neuroendocrine prostate cancer cells can also happen in castration-resistant prostate cancer before additional treatment, when the usually small number of neuroendocrine cells inexplicably become cancerous. They are not sure if it’s the same cancer as therapy induced disease, but it’s the treatment induced version that occurs more frequently and that they study.

Prostate cancer is the second most common cancer in men — skin cancer is first — and the second leading cause of cancer death in men — lung cancer is first. Age and family history, are risk factors, along with geography. It’s most common in North America, and tends to occur earlier and more aggressively in blacks. About 1 in 9 men will be diagnosed with prostate cancer in their lifetime.

Treatments include surgery, hormone therapy, radiation therapy and immunotherapy to help the patient’s immune system better attack their disease. Older men with other serious health problems may be watched closely rather than receiving treatment, according to the American Cancer Society.

The research was supported by the U.S. Army Medical Research Acquisition Activity Prostate Cancer Research Program, the National Cancer Institute and the Department of Veterans Affairs.