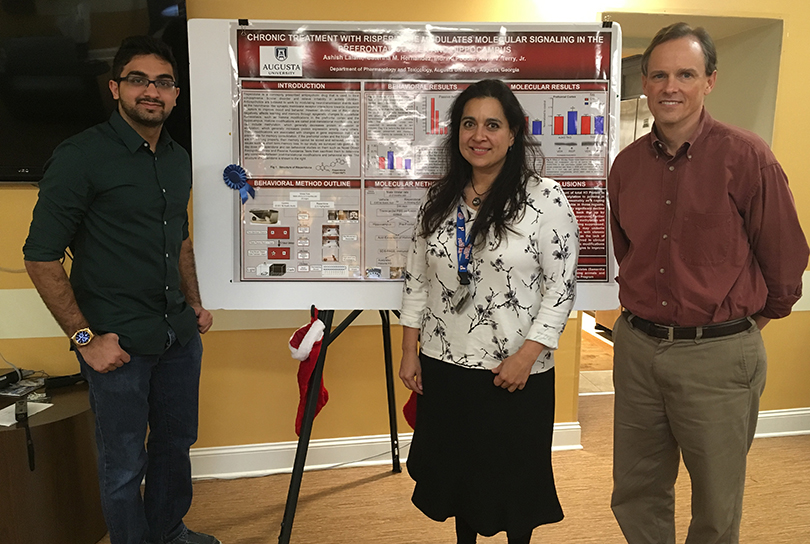 For the second year in a row, an Augusta University student has won the National Collegiate Honors Council’s student poster competition award in the category of Health Sciences.

Ashish Lalani, a senior cell and molecular biology major, presented his research, titled “Chronic Treatment with Risperidone modulates Molecular Signaling in the Prefrontal Cortex and Hippocampus,” at the 2016 NCHC annual conference in Seattle.

“Risperidone reduces the excitatory symptoms of things like schizophrenia, bipolar disorder and autism,” Lalani explained. “Essentially, what that means is the drug – a dopamine receptor antagonist – binds the dopamine receptors and kind of calms them down.”
“If we can find out how this is happening, we can target it and prevent it,” he added.

Spoken so plainly, it sounds like almost anyone could perform the same research. But the true scope of Lalani’s work showed in his final presentation.

His poster and research, produced over the course of a year with input from advisors and professors across both Augusta University’s Health Sciences and Summerville campuses, was widely praised by judges and colleagues alike for its depth of information and ease of communication.

The ability to combine the two, said Dr. Tim Sadenwasser, Honors Program director, is one of Lalani’s most impressive talents.

“I’m not a scientist, but I understood almost all of what went on in Lalani’s research,” he said. “That ability to communicate what you know is so important, and I think that’s part of the reason he won.”

“Ashish has this ability to break down these complicated concepts to whoever he’s speaking with, which is a rare quality among students,” she said. “That’s why I like working with him.”

It’s hardly the only reason, though. While Lalani isn’t likely to lavish himself with praise anytime soon, his advisor said she was more than willing to do it for him.

“Don’t even get me started,” Hernandez joked. “Whenever he does something, I text all my friends: ‘Guess what Ashish did.’ I actually have to hold myself back from bragging.”

While many students enter a particular field of research due to personal interest, few take as much stake in their work as Lalani. Working in a pharmacy, he said he sees people buying similar drugs on a daily basis.

Knowing firsthand the effects long-term risperidone usage can have on a person makes the search for a more effective treatment even more personal.

“I sell maybe 20 to 30 of these a day out of roughly 500 prescriptions,” Lalani said. “So, I wanted to see what this effect could be for people.”

That personal commitment in turn made understanding the research that much more important to Lalani, Hernandez said.

“He’s one of the rare students who likes to understand what he’s doing,” she said. “He won’t move forward until he gets the whole picture and understands it all.”

Sadenwasser, who traveled with Lalani to Seattle, said that quality in particular made Lalani – and Augusta University – a standout at the NCHC conference.

“Ashish is the second student of ours in a row who’s won this award at the national level,” he said. “It shows that our students really understand the research they’re doing, and that’s a real testament – not just to the intelligence of our students, but to the hard work our faculty are putting in with them.”

*Travel for Lalani’s presentation was paid for jointly by the Pamplin Student Research and Travel Fund and the Augusta University Honors Program.