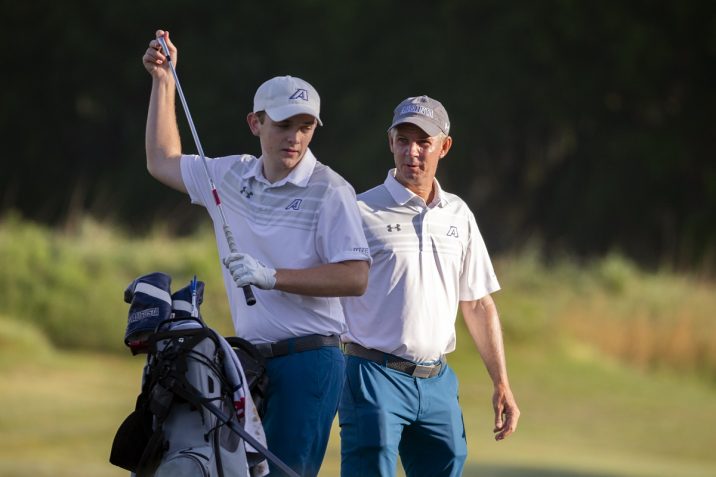 They found out last week they are the 12th seed in the Stanford Regional, which is from May 13-15 on the Stanford Golf Course in Stanford, California.

The week of preparation gave sixth-year head coach Jack O’Keefe time to fine-tune his squad but also remind them of how they got there and what they are capable of.

“We lost two of our top guys back in the fall, so it’s been a rebuilding spring,“ said O’Keefe, who received the Most Outstanding Coach award for the fifth year in a row at the MEAC Tournament. “Last year we had three freshmen, a sophomore and a senior and we made it all the way to the NCAA Championships. And we only lost the one senior. But then this past year we had a kid transfer at semester and had another kid go home to focus on academics and both were in our top 5.

“With that, we’ve taken a few lumps but we’ve also gotten some kids some experiences playing big-time golf too. It’s been a tough learning process but I think we’ve gained a lot of experience for this year that will help them this next week and the next few years for their career here,” O’Keefe said.

O’Keefe said the team reacted well to the changes and might have seen some of it coming. But he added that they knew they had to buckle down and focus as well as rely on assistant coach JP van der Walt to help keep the continuity going as best as he could.

“They’ve bought in with we’re trying to do and they’ve worked really hard,” O’Keefe said. “It’s been OK; we always want to do better but it’s been pretty close to what we want.”

The Jaguars are making their 22nd overall appearance in the NCAA Tournament and their fifth in a row during O’Keefe’s tenure.

“We’re excited, obviously. Any time you make postseason, that’s our ultimate goal: get to regionals, then nationals, then try to win another national championship. That’s step one,” O’Keefe said. “The site is a very good site, very competitive. There are nine teams that would be considered East teams … but I am happy with the draw and no matter where we go, we’re going to have to play well. That’s the ultimate goal is to play well to have a chance.”

For the 2018-19 season, the Jaguars started slow but finished the fall portion of their schedule with a third-place finish at the East Bay Deli Classic in Kiawah Island, South Carolina. They won the BCU Gary Freeman Spring Invitational in March in Daytona Beach, Florida, with junior McCullough Pickens winning the individual title.

Then came the conference tournament, which they won by 22 shots. Freshman Alex van Wyk won the individual title and was named Most Outstanding Performer, and Jaguars took four of the top five spots.

“Alex is one of our hardest workers on the team,” O’Keefe said. “It’s not a surprise that he had some success there. He’s one of our best chippers and putters and that’s what stood out at conference was saving more shots by getting a few more up and downs for pars. He made more birdies than he’s been making all year. His short game really rose to the top for him and that just showed that all that hard work had paid off.”

O’Keefe said they don’t know the regional course they’ll be playing but acknowledged that at 6,700 yards, it is one of the shorter championship-style layouts out there. That will put an emphasis on their practice round, which will hopefully lead to good strategy and a good game plan.

The top five teams in each regional will advance to the NCAA Championships from May 16-29 at Blessings Golf Club in Fayetteville, Arkansas, which will play host to both the women and men’s finals. The top individual from non-qualifying teams at each regional will also earn a trip to the finals.