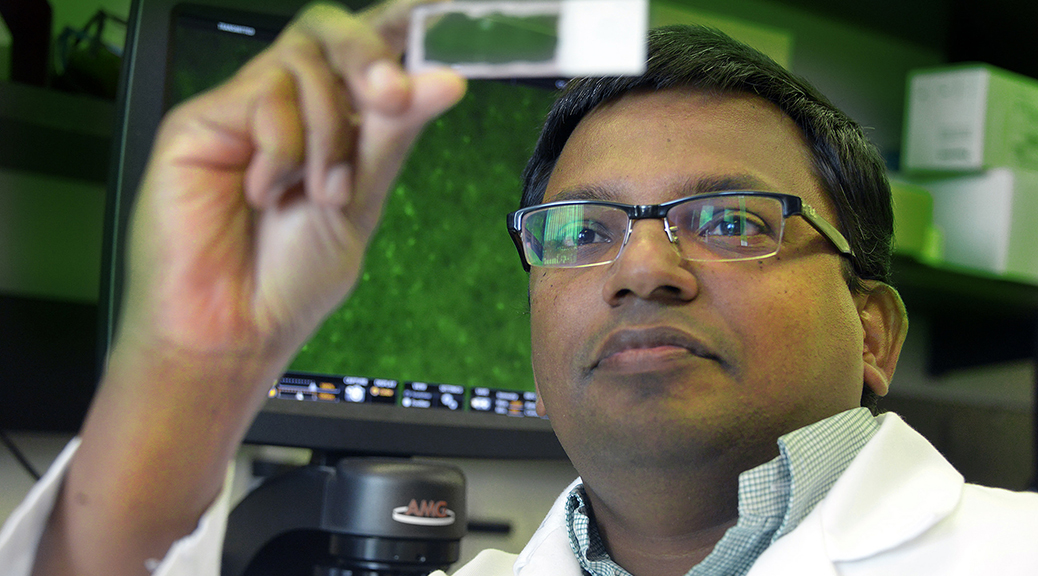 Higher blood levels of vascular endothelial growth factor, or VEGF, also correlate with high blood levels of interleukin 6, a cytokine that can cross the protective blood-brain barrier and typically promotes inflammation, said Dr. Anilkumar Pillai, neuroscientist in the Department of Psychiatry and Health Behavior at the Medical College of Georgia at Georgia Regents University. As with many disease types, inflammation is increasingly associated with schizophrenia, and high blood levels of IL-6 already have been found in these patients.

The new findings appear to point toward a blood test as an easier way to confirm the diagnosis of schizophrenia, rather than complicated and expensive imaging studies of the brain, and, ultimately, better disease understanding and treatment, said Pillai, the study’s corresponding author. “We are talking about a molecule where you can just draw blood and look at the lab profile,” he said.

A smaller prefrontal cortex is one of the brain abnormalities identified through brain scans of living patients as well as autopsies. Pillai’s lab had earlier shown low brain levels of VEGF, which could help explain lower blood flow and brain volumes in these patients. “Decreased blood flow leads to decreased brain tissue volume,” he said. Inflammation also can reduce brain size.

While findings of higher blood levels may sound counterintuitive to low VEGF levels in the brain, they likely indicate a “feedback inhibition” with the brain recognizing high circulating levels and deciding to produce less VEGF itself, Pillai said. In fact, high blood levels of VEGF may contribute to the disease process, the researchers write.

More patients need to be studied to see if the correlations hold up, Pillai said, and work also is needed to determine which comes first: high blood levels or low brain levels of VEGF.

The study, in collaboration with scientists at the School of Psychiatry at the University of New South Wales in Australia, looked at 96 people with schizophrenia as well as 83 healthy individuals. Brain scans were available on 59 of the patients and 65 healthy controls. Patients were recruited to Neuroscience Research Australia, a not-for-profit research institution based in Sydney that focuses on the brain and nervous system, as well as Lyell McEwin Hospital, a teaching hospital in South Australia affiliated with the University of Adelaide and the University of South Australia.

While likely best known for its role in making new blood vessels, VEGF also is key to the brain’s ability to adapt to change, such as respond to an injury, and protect against brain cell loss.