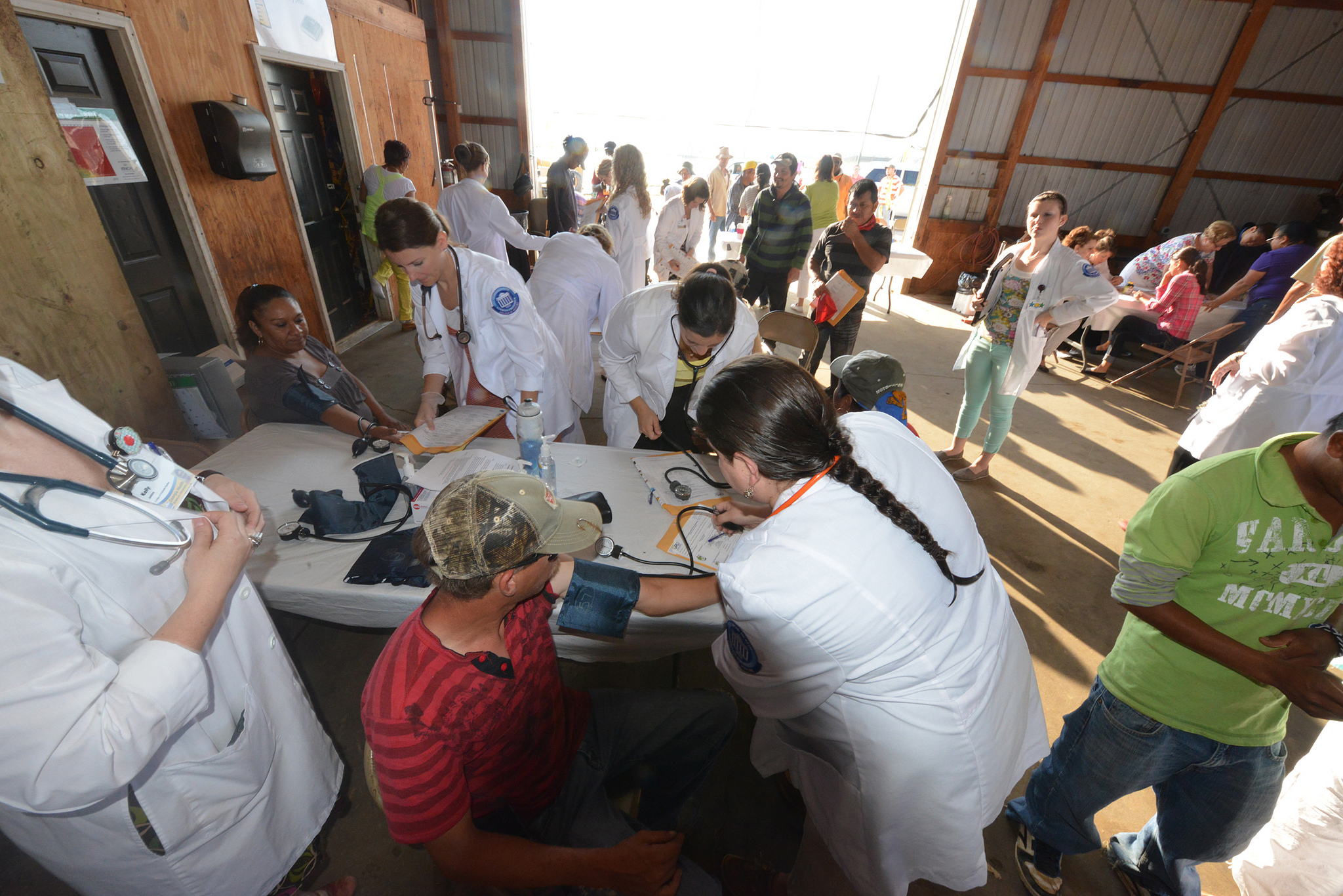 Ten years ago, Costa Layman Farms and the Georgia Regents University College of Nursing took a bold and important step into the field of personalized, preventive health care when they partnered to offer a health fair for workers at the South Carolina plant nursery.

At times the task proved daunting. Language barriers and social stigmas had the potential to make caring for farmworkers difficult, but with the leadership of GRU faculty, a commitment from student and alumni volunteers, and the help of community partners, the job became easier. Their efforts have resulted in more than 2,500 free health screenings for hundreds of farmworkers.

Years later, students and alumni say they continue to be inspired by their experiences at the Costa Layman Health Fair, which celebrates its 10th anniversary on Friday.

Two years ago, Allyson Wilson was a Clinical Nurse Leader student at GRU.

“As one of the student leaders of the health fair, I was responsible for organizing data collection as well as assisting in developing a data collection tool that allowed us to view trends in variables,” she said.

Wilson, now a Staff Nurse at Georgia Regents Medical Center, said the fair has become a regular part of her life.

“It was such a rewarding experience that I continued helping throughout the year with preparations for the fair,” she said. “I look forward to it every year, now. It’ll be something I’m involved with as long as I live in the area.”

Elisa Jenks, a Perinatal Staff Nurse at GRU, has a similar love for the fair. She said volunteering as a CNL student was a life-changing experience not only because of the lessons it taught her, but also because of the people it exposed her to.

“I love Hispanic culture,” said Jenks. “I’m always amazed by how kind the people are at the health fair. I’ve never been treated unkindly by anyone there. In fact, they’ve always greeted me with a smile.”

Jenks, the first recipient of the Layman Family Scholarship – a scholarship awarded to fluent Spanish-speaking students with a desire to serve Hispanic communities – said the health fair has helped her almost as much as some of the patients.

“I think I used to look at community health as a very foreign concept,” Jenks said. “Like, I’m this person that can make such a difference in other people’s lives. But that concept is so backwards. Being at the fair has taught me that I’m the one being impacted and changed.”

Aprile Osborn, a Biobehavioral Nursing instructor, volunteered as part of the 2009 health fair. She said her experience was very similar.

“It was one of the most rewarding experiences I’ve ever been a part of,” she said. “It was so humbling to be a part of something bigger than myself.”

Having grown up locally, Osborn said the health fair helped her to be understand the needs of the underserved.

“Growing up in this community where access to healthcare is so readily available, it was hard for me to fathom people living otherwise,” she said. “Being involved in the Layman project really opened my eyes to a population that I knew existed, but had never really known.”

Jimmy George, a Physiological and Technological Nursing instructor, first participated in the 2011 health fair. He said he’s happy to see how far the health fair has come in that short amount of time.

“I am so excited to see the growth of the health fair each year,” he said. “It has only been possible by the selfless commitment and dedication of Pam Cromer and Debbie Layman.”

Based on the past year’s health fair experience, George and Cromer presented a podium presentation titled “Costa–Layman Health Fair – A CNL organized, Interdisciplinary Initiative: A Model for Community-based Disease Prevention” in Dallas to a National CNL conference in October 2014.

Joshua Dunn, Stroke Program Coordinator at Emory University, said the health fair drove him to new heights and inspired him to continue helping others.

“I have continued my passion for outreach into underserved, underinsured populations within the metro-Atlanta area,” Dunn said. “That passion was definitely ignited that year at Layman’s Health Fair.”

But experience and passion aren’t the only things he took away from his time volunteering.

“I think of Debbie Layman (a College of Nursing alumnus and former manager at Costa Layman Farms) every time I’m in Lowe’s or Home Depot,” he said. “I see the plant carts labeled with Costa or Layman stamps, and think of those very sweet people in South Carolina. What a sweet woman, and such a dedicated group of individuals.”

To stay up to date with GRU’s College of Nursing, visit their Facebook page at www.facebook.com/GRUCONursing.