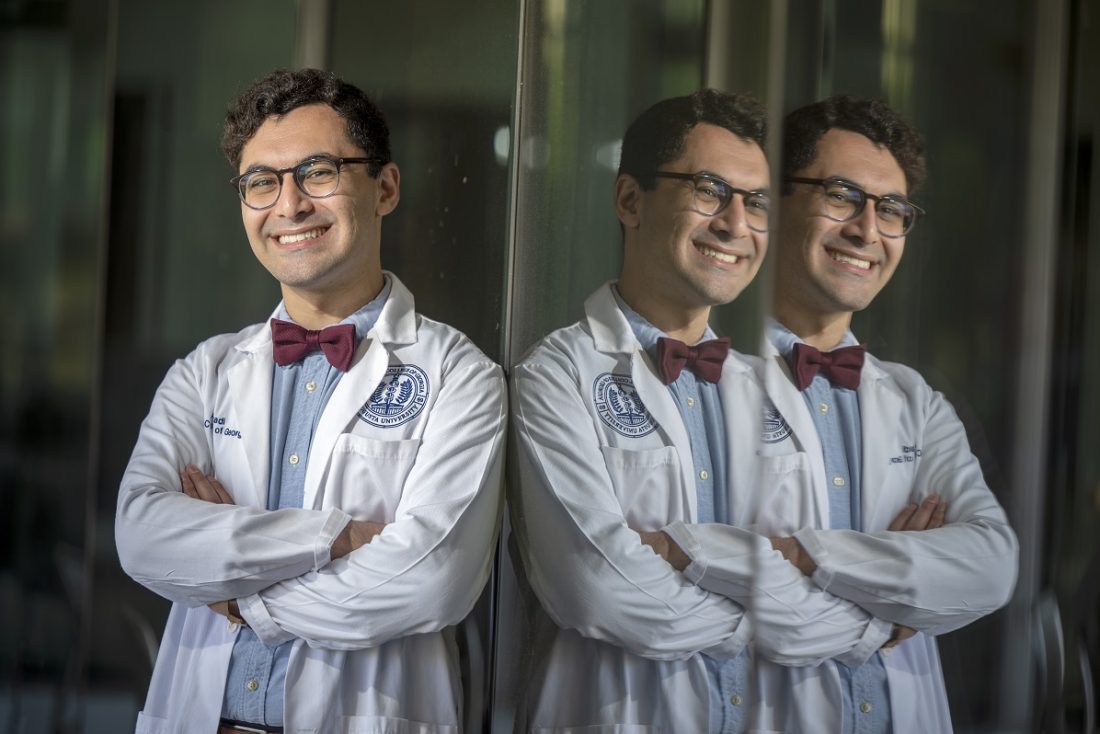 Very few people know what they want to do at the age of 5. But for Ali Azadi, he knew he wanted to become a dentist even then. Part of it came from the message in a fortune cookie.

“When I was 5 years old, I had a lot of dental issues, a lot of dental decay and didn’t have very positive experiences at the dental office,” said Azadi. “When I was 5, I read a fortune cookie that basically said your greatest strength lies in aiding others. For some reason, at that time it just clicked that I wanted to become a dentist and to make it a more positive experience for patients.”

Azadi started his collegiate career at Georgia Tech for his undergrad work before coming to the Dental College of Georgia at Augusta University.

He applied to other dental schools, but Azadi was impressed with the level of clinical training and patient experience offered at Augusta University. As an added bonus, the program was in-state, since he’s from Suwanee, Georgia.

His time here has been full of great experiences that included serving as president of the Student Professionalism and Ethics Association in Dentistry, a role he took head-on.

“We really got to expand the organization. It was awesome to see people coming together and were excited about learning how to practice dentistry in an ethical way that prioritizes patient care,” Azadi added.

After graduation, he doesn’t plan on going far as he’ll complete his orthodontics residency at DCG. Remembering his own negative dentistry experiences in childhood, he’d like to help put children and teens at ease when it comes to dental work.

“I would say probably 75% of the patient population is that teenage formative age. I think that’s a really critical age in a lot of people’s lives. So being able to have a small role in that time period is something I’m excited about and looking forward to once I start residency.”

Azadi credits Dr. Ronald Harris and Dr. Marlen Robles for serving as inspirations to him. They gave him some of his first patient experience and set the precedent for how to show empathy. They also helped make sure he had a high level of technical skill while remaining positive at the same time.

For Azadi, it’s certainly been a satisfying four years in Augusta.

“Just interacting with patients and seeing how much things mean to them. Like providing a patient their first set of dentures and them being able to smile, and saying it’s the first time they’ve smiled in several years, that’s always impactful.”

He’s also been able to spend time at a couple of other dental clinics in the state to see firsthand the role he can play in a community.

“I worked in clinics where basically the entire patient population didn’t have the financial means to go to any other clinics. So basically all the dental care is free at the clinic. I went to the Ben Massell Dental Clinic in Atlanta and the Whitefoord dental center in DeKalb County, Georgia, and both of those tried to provide care to patients who don’t necessarily ever receive care otherwise.”

After Azadi completes his residency, he’d like to go back to the Atlanta area and open a practice and teach part time in orthodontic clinics. Maybe down the road he’d want to come back to DCG on the administrative side, because he sees what an important role the school plays in the state.

“Because DCG has such a critical place in the state of dentistry in Georgia, being able to shape that as well and all the future generations that follow on a more global scale is something that is really exciting and interesting to me.”