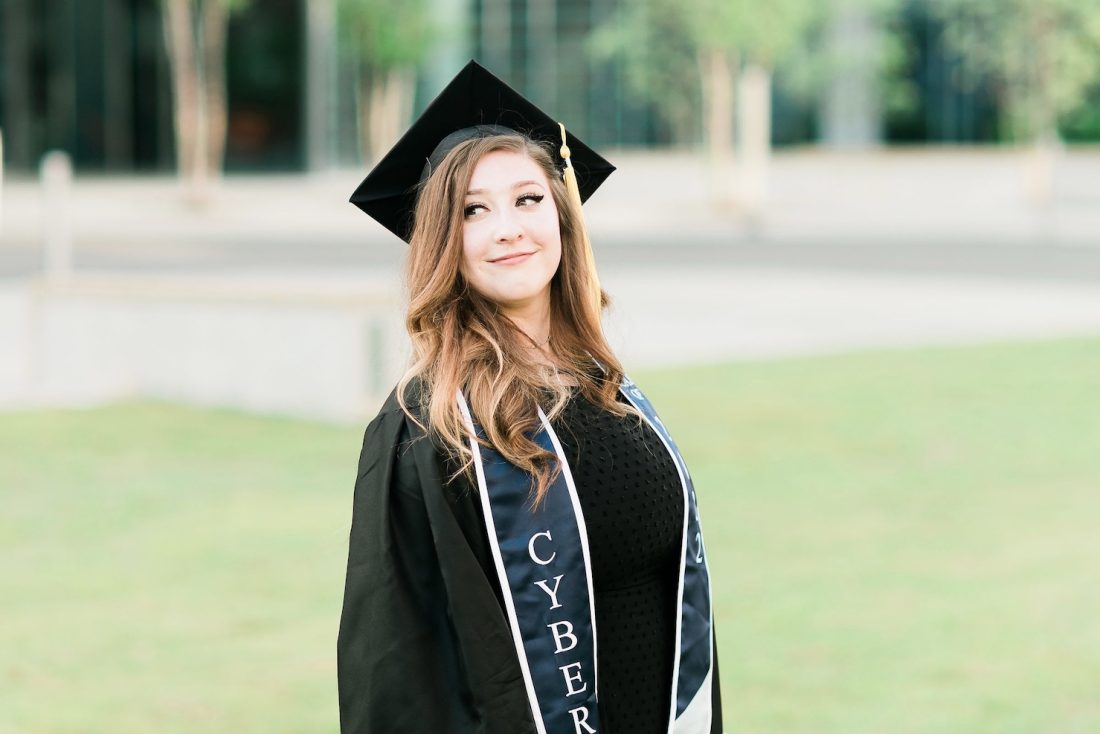 During her senior year at Grovetown High School, Lauren Wheeler made a decision that changed her life. She received an internship with the National Security Agency at Fort Gordon that opened her mind to a future career in cybersecurity.

“My dad worked at Fort Gordon, so I was born and raised here,” Wheeler said. “And I always liked computers, but initially I thought I was more artsy. So, back in high school, I was interested in graphic design and worked on the yearbook staff. But then my dad said, ‘Well, you know, there’s an internship that the NSA offers.’”

Wheeler didn’t know much about the internship, but there were two aspects of the program that appealed to her.

“First, I thought, ‘I can get out of school with this internship,’” Wheeler said, laughing. “And then, I thought, ‘It will also look good on my resume.’ So, I applied and received the NSA internship. That decision put me on my career path in cybersecurity, instead of graphic design.”

Wheeler, now 22, is graduating from Augusta University with a bachelor’s degree in cybersecurity and was recently named the 2022 Top Cybersecurity Student for the School of Computer and Cyber Sciences at AU.

While attending Augusta University, Wheeler has also been working full-time for almost four years as an access control specialist, contracting for the Department of Defense. In that role, she monitors closed-circuit television systems and intrusion detection systems and maintains a top secret/sensitive compartmented information clearance. In addition, Wheeler was also awarded the Department of Defense Cyber Scholarship during her senior year at Augusta University.

“With my dad working at Fort Gordon, I already grew up with security stuff in the house, so I was familiar with that part of cyber. And my internship in high school made me want to go to Augusta University because a few of the cyber professors come from the NSA,” Wheeler said. “So, even when I was in high school, I thought, ‘Cyber would be a good choice.’ Then, when I got to AU, I knew it was the right choice.”

With her cybersecurity degree, Wheeler says her career opportunities are endless — and she is proud to say she already has a job waiting for her the minute she walks across the stage and receives her diploma.

“A few weeks right after graduation, I’ll start my job with Army Cyber at Fort Gordon,” Wheeler said. “It’s exciting because, of course, you’ll hear some people talk about how, with their degree, it’s hard to find a job. Well, that’s not the case with cyber.”

She loves the fact that her cybersecurity degree will allow her to either stay in Augusta, which has become an international cybersecurity hub, or travel around the world.

“I know I want to stay within the government, but I also want to travel, so once this year is done, maybe I will start looking toward other locations,” Wheeler said. “For example, I have family up in Washington state and I think that would be a fun place to live. My parents also just moved to Hawaii. Personally, I think it would be cool to live in another country, which the government offers tons of opportunities for jobs overseas, so I’m excited about the possibilities.”

One of the main aspects of cybersecurity Wheeler finds most appealing is the empowerment that she now has over computer hackers, she said.

“I like the idea that I can protect myself,” Wheeler said. “Cybersecurity lets me be able to know what strategies I need and gives me the knowledge to protect myself. But I also have the ability to pass that knowledge on to others.”

Both in high school and college, Wheeler gave speeches and presentations about the importance of cybersecurity and she was pleased with the response she received from audience members.

“People were really receptive to what I was telling them because I was showing them how some social media posts and oversharing certain aspects of your life can be cyber risks,” Wheeler said. “For example, if you’re sharing that you are on vacation, you’re basically telling people you’re not at home. Or, like those Instagram challenges where they ask, ‘What do you prefer?’ Or, ‘Do you like this?’ With those kinds of challenges, you’re basically telling people the answers to your security questions. Those are the little things that people don’t think about.”

Another aspect of cybersecurity that Wheeler enjoys is programming, she said.

“I always thought being a code hacker sounded cool, like Mr. Robot,” Wheeler said, referring to the former USA Network show that featured a cybersecurity engineer who is recruited to join a group of “hacktivists” that aims to destroy all debt records by encrypting the financial data of one of the largest companies in the world. “I thought that programming would be cool and it would be awesome to be a girl doing it, too. There aren’t a lot of girls in this field.”

In fact, one of her favorite courses that she took at Augusta University was a class about programming taught by Steven Weldon, director of the Cyber Institute.

“I just knew programming would be exciting and Steven Weldon broke it down where it was a lot of fun,” Wheeler said. “He made it engaging, which not all people can do, and the two hours in the lab would just fly by.”

“I also liked Dr. Jason Williams’ classes because he stimulates a lot of conversation in the classroom,” she added. “That was nice because sometimes with this major — and if you are a student like me who doesn’t live on campus — we don’t get to talk to a lot of the other students. But, in his class, he encourages discussions and that helps you get to know your peers. And now I really know the people who I’m graduating with this spring.”

After four years at Augusta University, Wheeler can’t believe she will receive her diploma this week.

“Everything just went by so fast. It’s crazy to me that it’s already time to graduate. My brain is still on 2020 sometimes,” Wheeler said, laughing. “But my parents are super proud, especially my dad. When I decided to go into cybersecurity, I almost didn’t want to tell him. I didn’t want people to think, ‘Oh, she went into cybersecurity because her dad is in computer science.’ I just like to figure things out myself.

“But I’m so glad that I went into cybersecurity and my parents are thrilled with my decision and can’t wait for me to graduate.”