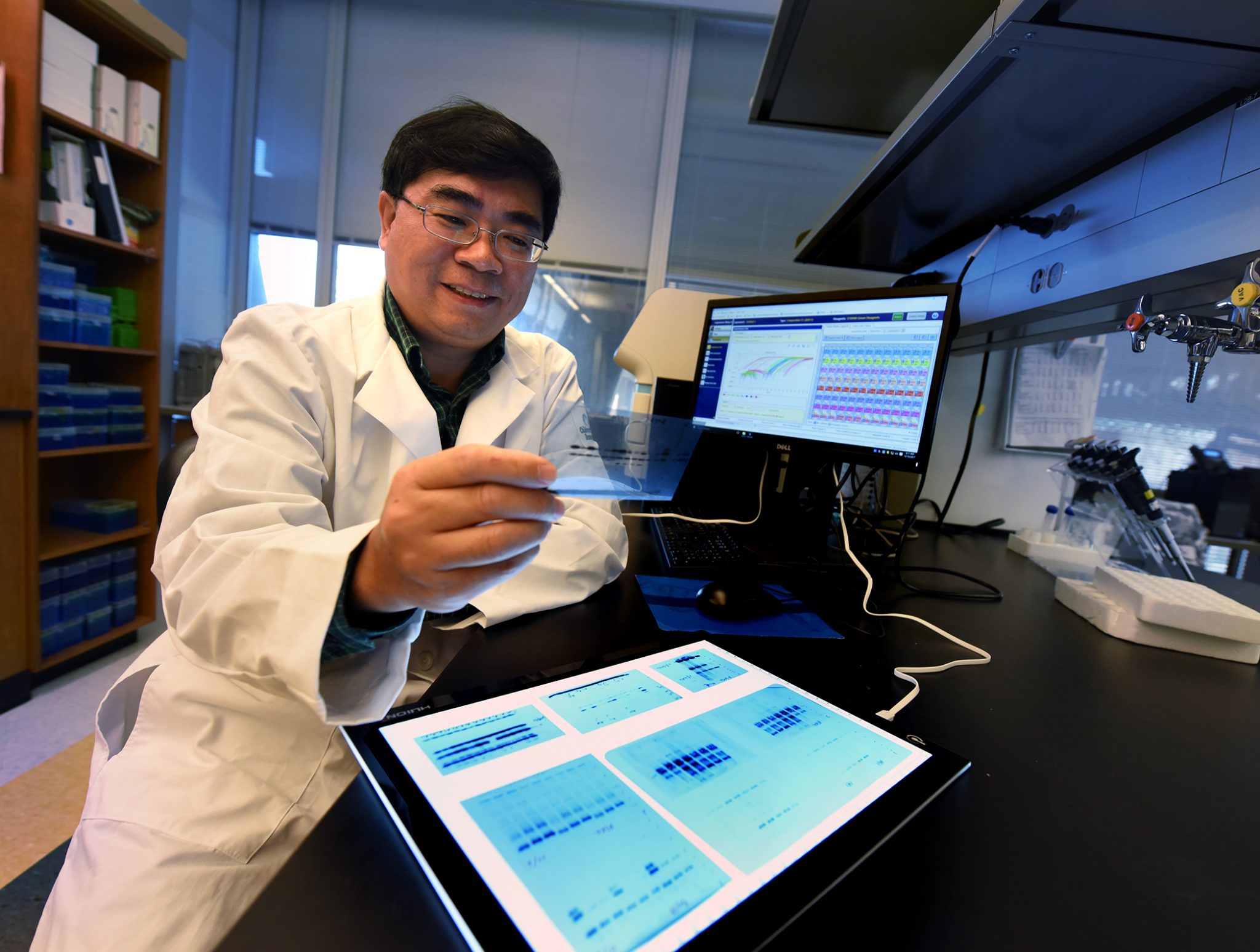 Paneth cells are like an internal antibiotic that eliminates unwanted microbes that make their way into our small intestine and helps us maintain a healthy gut microbiome.

When the Paneth cells in our small intestine become dysfunctional or in short supply, it appears to set us up for potentially painful and debilitating inflammatory bowel disease and maybe even cancer.

Now a Medical College of Georgia research team has emerging evidence that a little-known gene may have a big role in keeping our Paneth cells – and us – healthy and active.

“We need functional Paneth cells in our body to really maintain our microbiome,” says Dr. Honglin Li, cell biologist in the MCG Department of Biochemistry and Molecular Biology.

Li has evidence that at least one cause of the unhealthy shift is that when the gene Ufbp1 is knocked out of the intestinal lining under which Paneth cells live, Paneth cells die.

He is principal investigator on a new $1.4 million grant from the National Institutes of Health that is helping him figure out how and why.

The gene is normally highly expressed in Paneth cells, and a healthy small intestine appears to have the body’s highest population of these cells, Li says. In inflammatory bowel disease, expression of both the gene and Paneth cell numbers are down, something Li’s team has shown in both their mouse model and in a small study of human tissue.

“We are trying to find out what is the downstream mechanism that kills the Paneth cells,” Li says.

He is looking at what happens when they knock the gene out of Paneth cells and suspects it will result in cell death. Paneth cells definitely did not survive when his team knocked the gene out of all cell types in the intestinal epithelium, which provides a barrier between us and what we take in by mouth from the outside world. In fact, Paneth cells seem to be the most susceptible.

In dissecting just how Paneth cells die, the research team is also looking at how a deficiency of the Ufbp1 gene affects protein folding. Proper protein folding is essential to proper protein function and while they can’t yet look directly at the proteins to see if they are properly folded, they can examine the unfolded protein response. This is a common response to cell stress that happens in the endoplasmic reticulum, an organelle inside cells, which is essential to their wellbeing. In fact, the endoplasmic reticulum is where proteins get made, folded, modified and secreted.

One of the outcomes of the unfolded protein response is cell death,” says Li, and he wants to know if that is at least part of what happens when his gene is MIA.  His team hypothesizes that Ufbp1 plays a pivotal role in keeping this important assembly and distribution plant inside the cells well-functioning.

”It could be this apparently critical connection between Ufbp1 and Paneth cells provides new therapeutic targets,” Li says. “We have early evidence that if we boost the level of this protein, we can protect the Paneth cells.”

To date about 160 genes have been associated with inflammatory bowel disease, but they only account for about 25 percent of the disease, Li says. His lab appears to be the first to suspect a pivotal role for Ufbp1 in healthy Paneth cells, which have been linked to inflammatory bowel disease for more than a decade, and Li will be surprised if the gene is not one day added to the associated list.

To take out invaders and effectively suppress inflammation, a normal immune response to invaders, Paneth cells secrete enzymes that work their way into the invader’s cell membrane, make holes that disrupt the integrity of the protective membrane and the microbe dies.

While the small intestine – which is actually about 20 feet long, but small in diameter and where most nutrients get absorbed –   typically is not a major focal point for inflammatory bowel disease, it is one of the first places food and other things we put in our mouths go.

Li suspects at least one reason the large intestine – which follows the small intestine, is shorter but larger in diameter and where fluids get absorbed and waste gets made – gets inflamed is because the Paneth cells have not eliminated enough troublemakers.

Li acknowledges that there likely are multiple other causes for the loss of Paneth cells, besides problems with Ufbp1. In fact, there is early evidence that both a high-fat diet and significant calorie restriction can do damage. “This is only one part of the story for sure but we think it’s a very important part,” Li says.

“What is manipulating the gene,” he says, adding that they don’t yet know what controls the gene’s expression. “We still have a lot of questions.”

The gene also appears important to the health of goblet cells in the epithelial lining, which secrete protective mucus. When he knocked his gene out of just the epithelial lining, there was partial loss of these cells along with the Paneth cell death.  Li has early evidence that Ufbp1 also plays a role in liver and pancreas homeostasis.

An estimated one to 1.3 million individuals in the United States have inflammatory bowel disease, a chronic inflammation of the digestive tract, according to the Centers for Disease Control and Prevention.

Li is also a member of the Tumor Signaling and Angiogenesis Program at the Georgia Cancer Center at Augusta University.