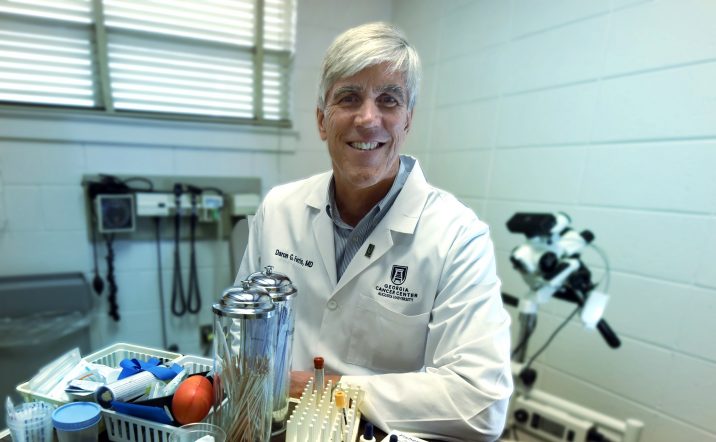 Dr. Daron Ferris, a professor of obstetrics and gynecology at the Medical College of Georgia at Augusta University and founder of CerviCusco, a nonprofit clinic that provides gynecologic care to women in Peru, is the 2020 recipient of the Renfield Foundation Award for Global Women’s Health from the University of Pennsylvania School of Nursing.

The international award, which comes with a monetary gift of $100,000, recognizes Ferris’s dedication to cervical cancer prevention among the indigenous women in Cusco, Peru.

The award was established in 2012 by the Beatrice Renfield Foundation and is given biennially to a demonstrated leader or leaders in the field of global women’s health. Past winners have included an obstetrician/gynecologist who established a hospital in the Democratic Republic of Congo that has become known worldwide for the treatment of survivors of sexual violence and women with severe gynecological problems, and the founder of a women’s hospital in Somaliland, which has some of the worst health statistics in Africa and one of the highest maternal and infant mortality rates in the world.

Ferris, the first American to win the award, founded CerviCusco in 2008 to help ensure that women in Peru, particularly those with limited resources, have access to health care, including screening, diagnosis and treatment of cervical cancer. Peru has one of the highest rates of cervical cancer in the world and the Andes region, where Cusco is located, is disproportionately impacted.

“We currently have more than 47,000 patients with a very limited staff of nine at our clinic, which just denotes the dedication and the work efficiency of our Peruvian health care team,” Ferris says. “Those are only the patients we see in our center. We travel multiple times a week on our bus into the mountains to care for thousands of additional women living in isolated villages. It’s been our goal to take modern health care prevention, screening, diagnosis and treatment strategies and interject them into the local community.”

Since its founding, staff at the clinic have also vaccinated more than 25,000 people against HPV, the leading cause of cervical cancer, and performed upward of 60,000 liquid-based Pap tests and more than 10,000 diagnostic examinations and cervical precancer treatments. With a donation from Harvard University, CerviCusco also conducts weekly telepathology quality control sessions with expert pathologists in the United States. The US-based radiology humanitarian organization RAD-AID and the Peruvian National Cancer Institute are partnering with CerviCusco to provide advanced breast cancer detection using artificial intelligence and teleradiology.

“What an extremely humbling and absolute total surprise to be recognized by the Renfield Foundation,” Ferris says. “The CerviCusco health care team, Friends of CerviCusco and myself are very honored to receive this award from such a prestigious institution.”

Ferris was a lead investigator on clinical trials for the quadrivalent HPV vaccine, which was approved by the US Food and Drug Administration in 2006. The HPV virus accounts for 90% of all cervical cancers and also a substantial number of others, such as vaginal, penile and some head and neck cancers.

Ferris is a former president of the American Society for Colposcopy and Cervical Pathology. He is also president of the International Cervical Cancer Foundation, a nonprofit organization committed to improving the health and quality of life of women through the primary and secondary prevention of female genital tract cancers, including cervical cancer.

Written by Jennifer Hilliard Scott
Connecting dots between higher blood pressure early in life and dementia
FacebookTwitterPinterestWhatsApp
Could you be losing your vision and not know it?