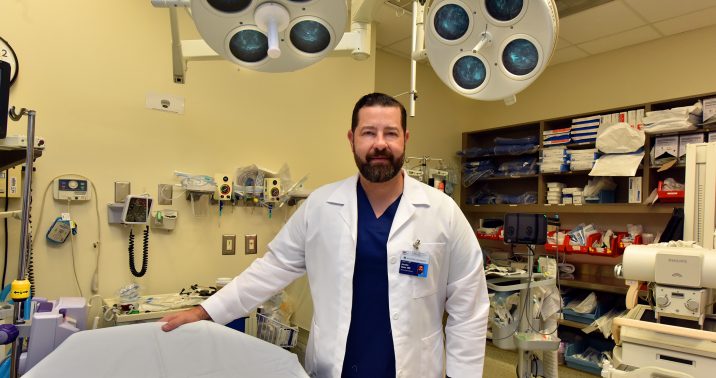 Dr. A. Alejandro Baez, a disaster medicine expert who helped coordinate the international response to the devastating 2010 Haiti earthquake and co-founded the Harvard Operational Medicine Institute, is the new director of the Center of Operational Medicine at the Medical College of Georgia at Augusta University.

Baez, who is trained in both emergency medicine and trauma critical care, joined the center, part of the medical school’s Department of Emergency Medicine, in July.

“Dr. Baez is a natural leader with experiences not only in building operational medicine programs from the ground up and implementing systems to ensure the best possible care is available when disaster strikes, but actually working front line during the worst circumstances,” says Dr. Richard Schwartz, chair of the MCG Department of Emergency Medicine. “While our Center for Operational Medicine has a mission and longtime reputation for optimally training the nation’s first responders, we are excited to see how Dr. Baez’s experiences can enhance what we are able to offer in the future.”

Baez helped found Harvard University’s Operational Medicine Institute while he was associate director of emergency medicine hospital services at Brigham and Women’s Hospital, a teaching hospital for Harvard Medical School, where he worked from 2005-09.

“The idea was to start looking at opportunities to better integrate EMS, law enforcement and hospital assets,” Baez says. “In Boston, we saw that the EMS providers wanted to know how to work best with law enforcement and the hospital systems were only loosely associated. We wanted to get key players on the same page and develop a cohesive architecture of emergency services and health care providers.”

Successful at getting Massachusetts State Police, Boston FBI and SWAT Teams, as well as other EMS providers to train with them, Baez and his colleagues began running simulations of high-risk, mass casualty events like mass shootings and bombings.

“They were practical and experience-based,” he says. “I think we did something good. Years later, when the Boston Marathon Bombing happened (in 2013), the response was optimal.”

The Dominican Republic native returned home to work on strengthening emergency medicine training programs and care in his own country in 2009, taking a job as professor, associate dean and director of health sciences continuing medical education at Universidad Iberoamericana. He also worked as chair of the Department of Emergency and Critical Care at Hospital General de la Plaza de la Salud in Santo Domingo, which was the first academic emergency medicine department in the Dominican.

In early 2010, sitting on a plane in Miami about to return home from taking a disaster medicine instructor course, Baez got word of the 7.0 magnitude earthquake that had devastated Haiti, which shares the same island as the Dominican Republic.

“That was the longest hour-and-40-minute flight home,” he says. “My hospital was the tertiary referral hospital for the United Nations, so for the first couple of days, we were just in the hospital taking care of people who had been medically evacuated from Haiti.”

Baez was able to eventually work with Dominican and Hatian officials to build two field hospitals that ultimately cared for about 5,000 people affected by the earthquake. “There was a lot of suffering, but we were able to find little pockets of hope,” he says of his work, which was later recognized by the Dominican and Hatian governments and the Pan American Health Organization.

At MCG, Baez hopes to continue the center’s focus on innovative delivery models for pre-hospital care — preventing unnecessary trips to the emergency room and preventing readmissions after someone’s been released from the hospital, for example.

“I’m working with the National Association of EMS Physicians and the Society of Critical Care Medicine and we’ve created a task force focused on developing a standardized national curriculum for pre-hospital critical care,” he said.

Baez earned his medical degree with honors from Universidad Nacional Pedro Henriquez Ureña in Santo Domingo. Baez came to the United States in 1999 to earn master’s degrees in science in health care and in public health, both from New York Medical College. In 2002, he was accepted into the emergency medicine residency program at the Mayo Clinic in Rochester, finishing three years later as the first international doctor to train there. He completed a trauma critical care fellowship in 2006 at Harvard.