In a Grand Rounds presentation earlier this month, a gastroenterologist from NYU Langone Health said that by increasing colorectal cancer screening, doctors could save the lives of enough patients to fill Yankee Stadium five times over.

“By 2030, if 80 percent of those eligible for a screening colonoscopy underwent the procedure, we could save 250,000 lives,” said Dr. Mark Pochapin, the Sholtz/Leeds Professor of Gastroenterology and director of the Division of Gastroenterology and Hepatology at NYU Langone Medical Center. “Our health is a precious commodity. We have to take care of it to enjoy all the wonderful joys there are.”

According to the American Cancer Society, colorectal cancer is the second-leading cause of cancer-related deaths in the United States. With March being recognized as National Colorectal Cancer Awareness Month, Pochapin said now is the right time for primary care doctors to review the benefits of a screening colonoscopy and other recommended screening tests with their patients. During a Grand Rounds presentation, Pochapin discussed how a colonoscopy allows for the detection and removal of colorectal polyps before they turn into cancer.

“We have learned that, for most colorectal cancers, there is a set sequence of genetic and epigenetic changes that occur over time, causing some benign polyps to progress into a malignancy over time,” Pochapin said. “This gives us a window of opportunity to find and remove pre-cancerous polyps before they become malignant.”

“With the increase in colorectal cancer screening, we’ve made a significant impact in reducing the number of people dying from colorectal cancer, along with lowering the number of new cases of this disease,” Pochapin said. “In fact, we are the only country in the world seeing decreases in both categories. It really is a U.S. public health success story for people age 55 and over.”

While a colonoscopy is the best screening test to remove polyps and prevent colorectal cancer, there are several other recommended screening options, including stool tests and CT colonography. The latest, called a FIT-fecal DNA test, is about 90 percent effective in detecting colorectal cancer, but not as sensitive in finding pre-cancerous polyps. The test, which can be performed at home and then shipped to a lab for analysis, looks for DNA as well as microscopic blood in a person’s stool sample. A FIT stool test option is recommended to be performed every year, the Cologuard test every 3 years. A screening colonoscopy is recommended every 10 years, if no precancerous polyps or cancers are found.

“I look at colonoscopy as similar to a Pap smear. It’s about finding problems before they become cancer,” Pochapin said.

While colonoscopy is the most comprehensive test for detecting polyps and removing them before they become cancer, Pochapin shared two studies during his Grand Rounds that could be the “next big thing” in detecting colorectal cancer. First, a study by Japanese researchers published in 2011 showed how dogs could detect colorectal cancer in human stool samples. The researchers took five samples of stool, one with cancer, and trained dogs to identify the sample with the cancer with 97 percent accuracy.

“We’ve all heard of the PET Scan and the CAT scan before. I call this the DOG scan,” Pochapin said.

Pochapin also discussed technology being developed in Israel showing promise in detecting cancer in a person’s breath. In preliminary studies, the test found a volatile organic compound, which is a chemical with a high vapor pressure, on the tumor cell alerting doctors to the possibility those patients could have colorectal cancer.

“One of my colleagues is studying the microenvironment of tumor cells for colorectal cancer,” Pochapin said. “His latest research shows these cells produce butyrate as they transition from a polyp to full-blown cancer. It’s this butyrate that could be what’s being detected by the dogs and the breath test.”

While the number of deaths in older patients is dropping, the number of people 54 and younger diagnosed with the disease has climbed slowly since 2007. As for determining why an increasing number of younger people are developing colorectal cancer, Pochapin has this message for medical students.

“This has become a major priority in colorectal cancer research, but we don’t have the answer yet,” he said. “But it is imperative that we consider colorectal cancer in the differential diagnosis of younger patients who present with symptoms.”

These patients can present with rectal bleeding, blood in the stool, and other symptoms. Because of their younger age, Pochapin said, they can be misdiagnosed with conditions such as hemorrhoids or irritable bowel syndrome.

“If you have a 32-year-old with rectal bleeding, don’t write it off as hemorrhoids,” Pochapin said. “It may be the presentation of colorectal cancer.”

The bottom line, Pochapin said, is for future doctors to always remember a quote he lives by: “There’s nothing more important than your friends and your family.” This is why he believes in the mission of finding colon cancer before it forms. 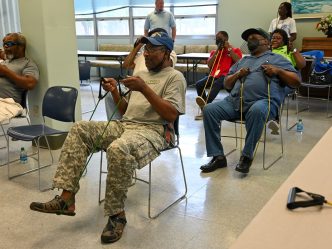