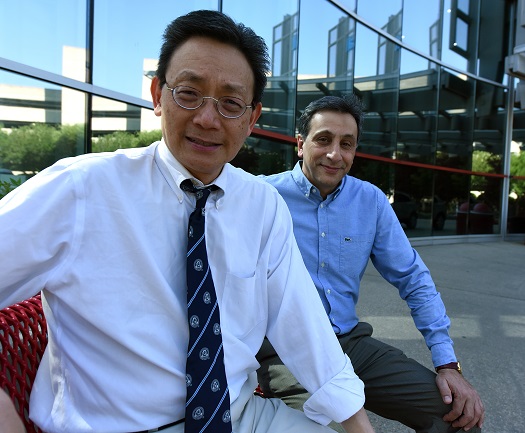 Cannabidiol, or CBD, may help reduce the cytokine storm and excessive lung inflammation that is killing many patients with COVID-19, researchers say.

While more work, including clinical trials to determine optimal dosage and timing, is needed before CBD becomes part of the treatment for COVID-19, researchers at The Dental College of Georgia and Medical College of Georgia have early evidence it could help patients showing signs of respiratory distress avoid extreme interventions like mechanical ventilation as well as death from acute respiratory distress syndrome.

“ARDS is a major killer in severe cases of some respiratory viral infections, including severe acute respiratory syndrome coronavirus 2 (SARS-CoV-2) and we have an urgent need for better intervention and treatment strategies,” says Dr. Babak Baban, immunologist and interim associate dean for research at DCG and corresponding author of the study in the journal Cannabis and Cannabinoid Research.

Our laboratory studies indicate pure CBD can help the lungs recover from the overwhelming inflammation, or cytokine storm, caused by the COVID-19 virus, and restore healthier oxygen levels in the body, says co-author Dr. Jack Yu, physician-scientist and chief of pediatric plastic surgery at MCG.

Their CBD findings were enabled by their additional finding of a safe and relatively inexpensive model to duplicate the lung damage caused by ARDS. Work on the virus itself is limited to a handful of labs in the nation that can safely manage the highly contagious virus, and their newly reported approach opens more doors for studying SARS-CoV-2, COVID-19 and similar virus-induced conditions, they say.

Their model, which takes advantage of the large, unique genetic structure of the novel coronavirus, produced classic symptoms of ARDS like the overwhelming, destructive immune response, then CBD significantly downregulated classic indicators of the excess, like inflammation-promoting cytokines as it improved oxygen levels in the blood and enabled the lungs to recover from the structural damage.

A major problem with SARS-CoV-2 is instead of just killing the virus, the over-the-top immune response can quickly disable the lungs, transforming them to a place where virus is replicated, rather than a place that makes oxygen available for our bodies and eliminates potentially harmful gases like carbon dioxide.

Mechanical ventilators can take over these vital functions for a while, and enable critically ill people to use less energy to just breathe and have more energy to fight infection, while ideally the lungs recover from the assault. However evidence suggests 30-50% of patients who get to the point of mechanical ventilation, don’t survive.

The cytokines in these now famous “storms” are a class of molecules like interferon and interleukin, secreted by immune cells and other cells like endothelial cells that line blood vessels, which impact cell communication and can both promote and deter inflammation. In the case of COVID-19, there is excessive production of inflammation-promoting molecules like the interleukins IL-6 and IL-1β, as well as immune cells like neutrophils and monocytes, the researchers say.

They looked at objective measures of lung function in mice like levels of proinflammatory cytokines, oxygen levels in the blood before and after treatment, as well as temperature, an indicator of inflammation. Oxygen levels went up, while temperatures and cytokine levels went down with CBD therapy. Days later, a more detailed analysis of the lungs, reinforced reduction of key indicators of destructive inflammation, which their model, like the virus, drove way up including reduced levels of IL-6 and infiltrating neutrophils.

In fact, both clinical symptoms and physical lung changes resulting from ARDS were reversed with CBD treatment, they say.

“The natural instinct of the virus is to make more of itself,” Baban says. “It weaves with our DNA to make the cell produce food and everything it needs.” Viruses also tend to have a tissue or tissues they prefer — some can and do go anywhere — and for SARS-CoV-2, the lungs are high on the list, he says.

Our bodies aren’t used to this double-stranded RNA so, like the virus, POLY (I:C) gets the immediate and extreme attention of toll-like receptor 3, a family of receptors that help our body recognize invaders like a virus and activate our frontline, innate immune response.

“The toll-like receptors 3 see this and just go nuts,” Yu says. The fact that the coronaviruses are literally big and have the largest known viral RNA genome make such a vigorous cytokine and immune response both plausible and probable, adds Baban.

Mice received three, once-a-day doses of POLY (I:C) in the nasal passageway. CBD was given by a shot in the abdomen, the first dose two hours after the second POLY (I:C)  treatment, then every other day for a total of three days in a process that sought to mimic mice getting treatment about the time a human would begin to experience trouble breathing and likely seek medical care. Given too early, CBD might actually interfere with a proper immune response against the virus, Yu says.

CBD quickly improved the clinical symptoms, then later detailed studies of the lungs showed damage to their structure, like tissue overgrowth, scarring and swelling, also had totally or partially resolved. Their next steps include doing similar studies on other organs impacted by COVID-19 including the gut, heart and brain, Baban says.

At least one way CBD is thought to calm the immune response is because it looks similar to endocannabinoids, a natural cell signaling system in our bodies believed to be involved in a wide variety of functions from sleep to reproduction to inflammation and immune response. CB1 and CB2, the main receptors for this system, are found extensively throughout the body including the brain and respiratory system, where we breathe in manmade and natural irritants in the air — as well as viruses and bacteria — that might inflame. While understanding the workings of the natural endocannabinoid system is still very much a work in progress, it’s thought that one way CBD works to reduce seizures, for example, is indirectly through the large number of CB1 receptors in the brain, says Yu.

CBD is available without a prescription, and is used to treat problems like seizures as well as Parkinson’s, Crohn’s and other conditions where pain and/or inflammation are a major factor. It’s derived from the hemp and cannabis plant, which are essentially the same although hemp has a much lower concentration of the “high” producing THC. Other investigators have shown the calming effect of CBD, for example, can block IL-6 in other models of inflammatory disease.

ARDS is a rapid, severe infection of the lungs that results in widespread inflammation, shortness of breath, rapid breathing and the inability to sustain adequate oxygen levels to the body and brain. Shortness of breath or difficulty breathing are some of the early signs of COVID-19. ARDS is a major cause of death in patients who are critically ill for a variety of reasons, including common sepsis.

The work was supported in part by the National Institutes of Health.