Augusta University Assistant Professor Matthew Buzzell, an award-winning filmmaker who co-chairs the popular Cinema Series, will be exhibiting approximately 20 of his large-format French film posters at the Westobou Gallery at 1129 Broad Street in Augusta.

The show, which runs through March 25, will begin with an opening reception from 5-8 p.m. on Friday, Feb. 12. On March 11, Buzzell will host another reception at which he will discuss his collection, which dates from the 1950s through the 1990s.

“In the pre-internet era, building anticipation for a film’s release was largely left to chance and art,” Buzzell said. “Film posters could hold artistic sway for weeks or months in a cinema lobby. Each poster stirred wonder and built anticipation.”

The free exhibition is presented in conjunction with the Augusta University Cinema Series. For more information, visit the Westobou Festival or the Cinema Series. 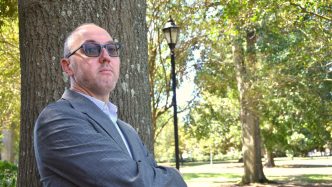