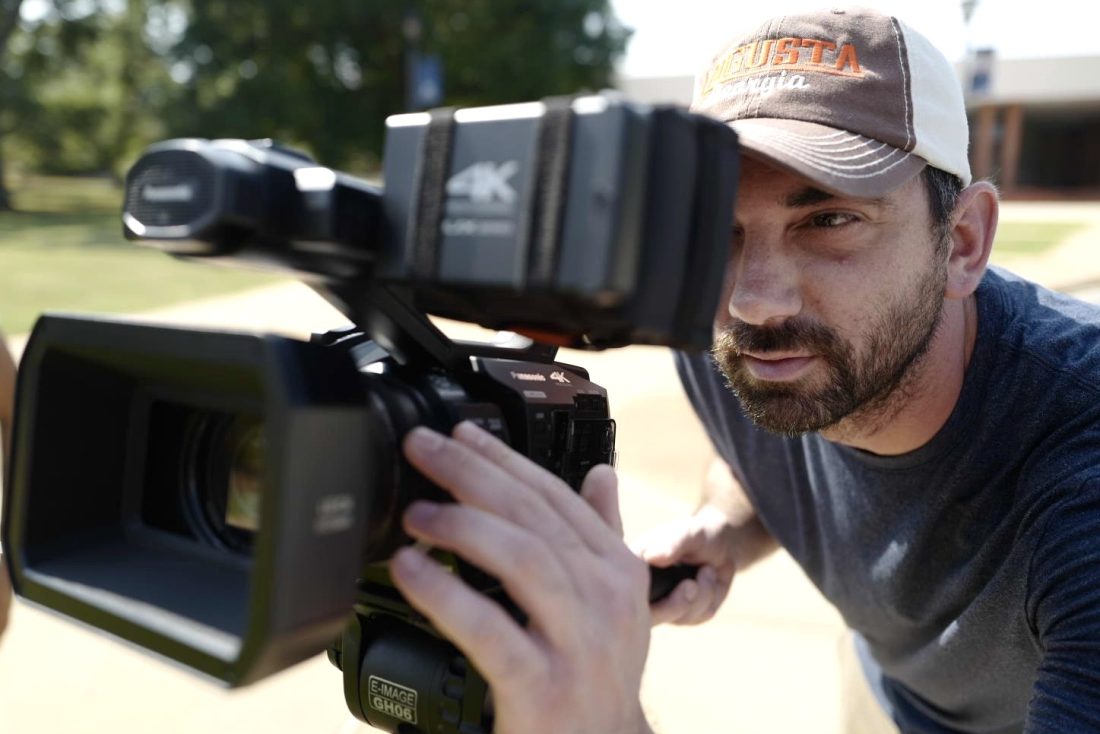 “In the beginning, I was really into sound engineering and music, so I got a gig in my high school doing the sound engineering,” Rolfe said. “Eventually, I started doing the lights and began to move pretty heavily into theater. I was definitely a theater kid, so I began helping my friend, who was also in the theater, do a short film in high school, and it just made me really interested in filmmaking.”

But when Rolfe first enrolled at Augusta University a few years ago, she wasn’t sure exactly where she was headed or what she wanted to study.

“I didn’t go into college instantly thinking I would do film,” she said. “I thought, ‘Let me take some classes and kind of figure it out.’ But I took one film class my first semester, and afterward, I was like, ‘This is it. This is what I’m going to do.’”

While Rolfe’s major is currently integrated studies, she can’t wait to officially declare her new major as the Bachelor of Fine Arts in Digital and Visual Storytelling that will begin this fall at Augusta University.

“I began with an integrated studies degree because I wanted to just kind of hone in on the classes that I thought would best serve me and help me become a filmmaker,” Rolfe said. “Fortunately, taking that approach has given me a really good lead into the new BFA because I’ve been taking a lot of art and design classes as opposed to some of the other required classes. So, thankfully, all of the classes that I’ve taken so far are going to fit pretty much perfectly into this new BFA.”

“It couldn’t have worked out better,” she added. “I’m so grateful that Augusta University is offering me pretty much my perfect degree just before I graduate.”

The new BFA in Digital and Visual Storytelling starting this fall will prepare students to be “cutting-edge visual storytellers” by developing diverse skill sets including a strong theoretical and technical understanding of filmmaking, theater performance, writing, directing and production through multiple forms of expressive media, explained Scott Thorp, chair of the Department of Art and Design at Augusta University.

“Students graduating with this degree will have the skills to be like a one-stop shop of multimedia production,” Thorp said. “This is an extremely unique degree. In fact, we haven’t found a similar degree anywhere in the country, because, traditionally, theater and film are housed in different places. Other programs don’t even attempt to put them together, which is a shame because they interact in much the same way.”

The new BFA program will be headed by a group of talented and enthusiastic professors from the Department of Art and Design, including Matthew Buzzell, Dr. Melanie Kitchens O’Meara and Doug Joiner, Thorp said.

“In the beginning, the more we began designing this degree, the more excited we got,” Thorp said. “A student with this degree is going to be able to film something that they acted in, they directed, they edited, they wrote, so I think this new BFA will be a place for students with all of these varieties of backgrounds. A student can come here and be a creative person with a lot of freedom and future opportunities because there’s a great deal of flexibility with this degree.”

For more than a decade, Georgia’s film industry has posted exponential growth to become an epicenter of film, with new record spending regularly set by productions, Thorp said.

Just last year, the Georgia Department of Economic Development announced that the film industry recorded a blockbuster year in the Peach State. During fiscal year 2021, the film and television industry set a new record with $4 billion in direct spending on productions in the state.

“The job market for students with this new BFA is really robust, especially in this region because of the filmmaking industry in Georgia,” Thorp said. “But there are so many options beyond that industry because small, independent companies also need storytellers.”

Not a typical BFA degree

When the Board of Regents of the University System of Georgia officially approved the new program last fall, Dr. Wesley Kisting, associate dean of Pamplin College of Arts, Humanities, and Social Sciences at Augusta University, said this new degree will be attractive to students throughout the region and beyond.

“We’ve known for a long time that students here would love a path where they can immerse themselves more deeply in film, media production and performance,” he said. “I am certain a number of students will convert immediately when the program is launched because this is really what they would like to do.”

“This is not a traditional film or theater degree like many people might think looking at the curriculum, which includes a lot of film and theater components,” Kisting said. “It is designed as an interdisciplinary program that is really geared toward students who are now growing up within, what is called, the creator economy.” 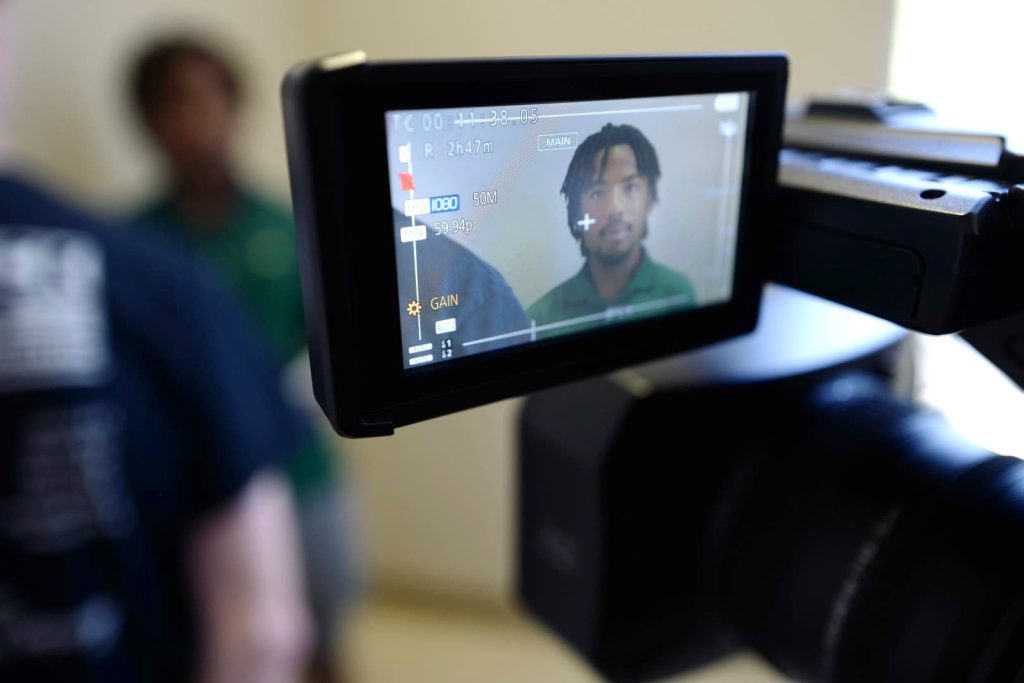 “This is a huge industry, but a non-traditional industry that has emerged on digital and social media across all kinds of different platforms such as YouTube and Twitch,” he said. “People have found ways to do what is essentially a combination of traditional filmmaking, performance and public relations skills.”

The art of collaboration

For Dr. Melanie Kitchens O’Meara, getting the opportunity to help develop a new BFA from scratch has been a dream come true, she said.

“To see a new program that I have my hands on and I have the ability to help create and make to benefit our students is exciting,” O’Meara said. “And I think the students are excited, too, because they are exploring these other classes. For example, I’ve got several students who have been in my last two theater productions and this semester they started taking film classes with Matthew Buzzell. At first, they were a little nervous because it was new to them, but they ended up having so much fun. And it’s exciting for me and Matthew to talk and say, ‘Hey, how are my students doing in your courses?’ It’s a wonderful collaboration.”

Earlier this year, Doug Joiner directed the play Machinal by Sophie Treadwell, and Buzzell said it was a powerful performance that gave him an idea for a new project.

“I told Doug and the actors, ‘It’d be really cool if we could film some of these scenes like a movie and have my cinematography students come in and cover it with multiple camera positions.’ And they thought that was great,” Buzzell said. “I told them, ‘This would create some really incredible synergy between the theater-centric students and the film-centric students.’ The filmmaking students would have a unique opportunity to work with great written material, but also with students who are well rehearsed, well directed and already have their performances attuned.”

And the theater students would benefit by having a short film showcasing their acting abilities, he said.

“While it would serve my cinematography students as great working examples of what they can do, it would also serve the students that are focused on acting as a great tool for their portfolio,” Buzzell said. “In the end, they would all have a beautifully photographed scene. So, finding these links between film and theater isn’t very difficult. I think there’s a lot of fun that our students can have with this degree, both in front of the camera and behind the camera.”

Joiner, who has been directing for more than 25 years, said this new degree will enhance the skillsets of each of their students so they will be “highly employable” after they graduate.

“This will be quite marketable for them when they leave to get jobs because, when I first began directing, I had to learn to do everything from build sets to lighting and sound,” Joiner said. “That’s the key. I believe the specialization of arts is limiting. If you can do a great number of tasks and crafts associated with performance, directing or filming, then you’re going to be a lot more marketable and better off than those who have specialized in only one of those skills.”

Word about the new BFA has quickly spread across campus and there are many students who are eager to pursue this degree, Thorp said.

“One of the interesting things about this is, we’re not looking to create a particular type of student,” Thorp said. “We’re looking to really have students who are creators. Those are the students who will find this degree appealing.”

Shiloh Reimche, a 21-year-old sophomore at Augusta University, has decided to switch to this new BFA degree and couldn’t be more thrilled about this opportunity.

“Prior to the new BFA, I was struggling on deciding what to major in. Once I found out about the new major, I knew immediately that it was the perfect fit for me,” Reimche said. “I’ve always had a passion for theater and film and this new BFA allows me to pursue my passions while also working toward a degree. And so far, the classes required for the major have helped me as an actor grow tremendously.”

One of the best aspects of this new degree is the professors who are teaching the classes and mentoring the new BFA students, Reimche said.

“The professors who teach the BFA courses are absolutely wonderful,” Reimche said. “Their passion for theater and/or film shines through their teaching methods and inspires me as I learn. I definitely think this degree will set me up for success in my future career.”