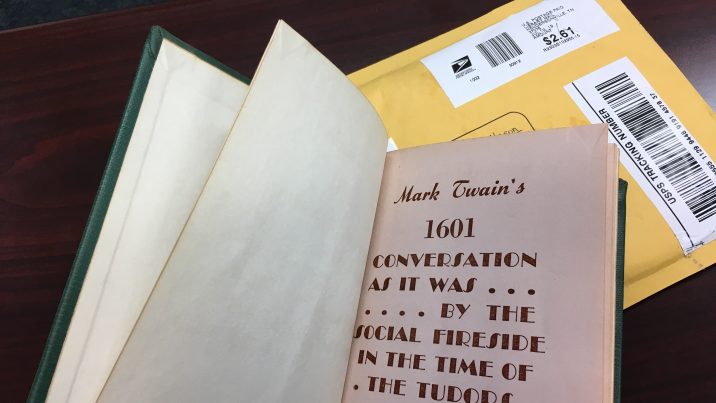 An Augusta University library book has made its way home — 48 years overdue.

On July 9, an email came to Augusta University’s Greenblatt Library, one of the school’s two libraries, with a curious message from John Ham, who wrote that he found in his basement a copy of Mark Twain’s 1601: Conversation As It Was By the Social Fireside in the Time of the Tudors, marked for Augusta College.

In the email, Ham said he had been stationed at Fort Gordon in 1970 and 1971 and often went to the library.

“I do not recall how I obtained this book but do wish to return it, assuming what was Augusta College is now Augusta University. If you would provide me the appropriate mailing address, I will return it as soon as possible,” he wrote.

The email was forwarded to Melissa Johnson, assistant director of reference and education services, at Reese Library on the Summerville Campus, who sent him the address. Two weeks later, the book arrived in the mail.

From his home in Nashville, Tennessee, Ham said he did not remember visiting Augusta College or checking out the book, but he did frequently visit a library in Augusta. Then in his early 20s, he joined the Army Reserve and was stationed at Fort Gordon for Advanced Individual Training (AIT).

Mark Twain was — and still is — one of his favorite authors. He enjoyed Twain’s storytelling and always thought he had an interesting life.

The book had quite an interesting life, as well.

After AIT, Ham went home to Nashville and enrolled in Tennessee Technological University, changing majors several times before graduating with a degree in accounting and economics and settling into a career as an accountant.

During a gutter repair, a soffit was placed too close to the chimney. As a wood-burning stove was the Hams’ primary source of heat, the soffit came in contact with the chimney and sparked a fire that engulfed the attic. Thousands of gallons of water doused the home and its contents. The little volume was carted away with all other salvageable items to be cleaned, returned in one of about 300 boxes nearly a year later, eventually making its way back onto the bookshelf in the basement.

That is where it lived until a guest spotted it and pulled it off the shelf.

“I hadn’t really noticed it in years and years,” Ham said. “It brought back a few memories. I thought, this really isn’t mine. It needs to go back home.”

But first, he did read it one last time.

“It’s different from most of Twain’s stuff. It was obviously not meant for the general public,” Ham said.

Told from the point of view of a sanctimonious cup-bearer, the short story is a fictional conversation between Queen Elizabeth, Ben Johnson, Francis Beaumont, Sir Walter Raleigh, the Duchess of Bilgewater, William Shakespeare and a few others that starts with a fart and goes downhill from there.

“I would have found it very interesting (at 22). I didn’t find it quite as interesting at 50,” Ham said.

Johnson said the library was thrilled to have it back, though they’d long since replaced it and now have two copies available for checkout. This one probably won’t go back into circulation.

“We’ve had something disappear for two years. I think that is the longest,” she said.

The Reese Library is — as the college library was then — a federal depository library, which means the public is able to come in and view the collections. (Reese Library didn’t open until 1977, six years after Ham left Augusta.) Though Ham doesn’t remember doing so, it’s likely he did visit the campus.

Johnson said she and her staff had so much fun crunching numbers to figure out what Ham would owe if they were to enforce the fine. (They didn’t.)