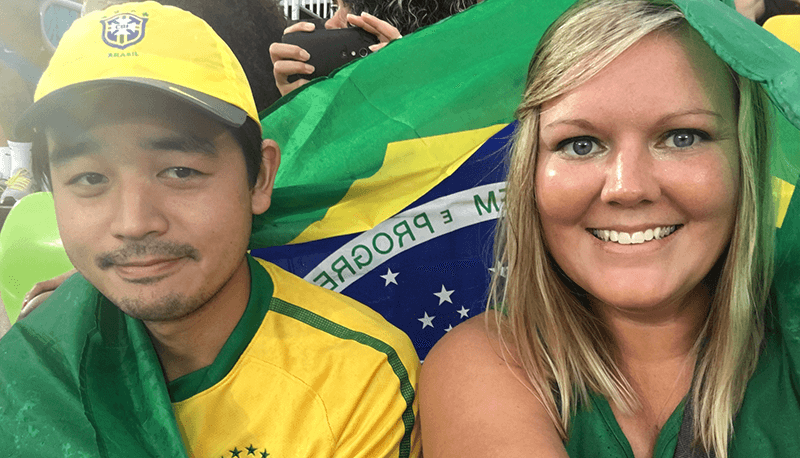 When Arthur and I were making plans for the 2016 Rio Games, we knew that we would only have a few days to attend Olympic events.

Saturday was one of those days. When we were buying tickets the choice came down to badminton and the pentathlon. Once we did some research to find out what exactly the pentathlon was, we decided we couldn’t miss it.

The modern pentathlon is an event composed of fencing, equestrian show jumping, swimming, running and shooting. We were intrigued. Arthur jokingly said it sounded like American west medieval laser tag. We also thought it sounded awesome. So, we bought the tickets.

Turns out we were right.

NBC published the following statement about the pentathlon: “The basic premise is of a soldier trapped in a castle on a lake. He must fence his way out before swimming to the shore, riding an unfamiliar horse out of the village and running through a wood shooting at enemies.”

We were indeed watching American west medieval laser tag, and it was awesome.

But we almost missed the event entirely.

It was a fairly overcast day which we were happy about because the pentathlon takes place in an open air arena. We missed fencing while trying to find our seats, but we did get to walk across the area where the athletes were waiting to compete.  I saw the athlete competing for the United States and fan-girled a bit. I have no idea who he is, but he’s a U.S. athlete. That’s all that matters.

When we sat down volunteers were setting up the arena for the show jumping portion of the competition. It also started raining. Then, it started pouring.

So, we left the arena and started to walk out of the park. Then, we started second-guessing our decision. We were soaking wet and cold, but it’s just water. We didn’t come all the way to Brazil to leave an event because of some water. So, we went back to our seats.

When you sit down in the arena, it’s easy to pick out the fan sections. We saw Irish fans sitting together, American fans and Guatemalan fans. There weren’t many of them, but they knew how to make some noise.

There was so much going on Arthur and I commented to each other that we didn’t even know where to look. It was sensory overload. I loved it.

By the end of the race, everyone was on their feet. Arthur even made it on the jumobtron. It was pretty amazing to be sitting in the middle watching almost an entire athletic arena rally around a single athlete.

Although, neither a Brazilian nor an American medaled in the event, we still got to see our first medal ceremony. The initial reason I wanted to buy tickets to the pentathlon was because it gave us an opportunity to see a medal ceremony.  That was the one Olympic experience I knew that I wanted to have.

Even though I didn’t get to see an American stand on the medal podium, I loved watching the reactions of the athlete’s as they received their medals. They’ve worked years for this moment, and as they stood on that podium I was watching their dreams come true. I may have shed a tear or two.

When we bought our tickets we were unsure about the pentathlon. However, this ended up being one of the best days we’ve had in Rio, and after attending the event, our opinions have changed. American west medieval laser tag is awesome!