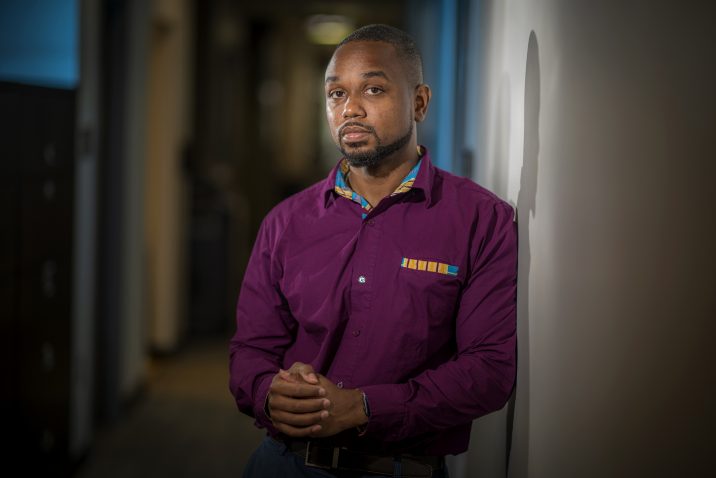 A survey of mostly African American adults living in and around one of Georgia’s largest cities found that COVID-19 vaccine hesitancy was greatest among those age 18 to 29, investigators say.

“Age is the main driver,” says Dr. Justin Xavier Moore, epidemiologist at the Medical College of Georgia at Augusta University, with those 18- to 29-year-olds surveyed having 21-fold increased odds of being vaccine resistant compared to those 50 and older.

COVID-related housing insecurity — difficulty paying the rent or mortgage or even eviction — increased the odds of vaccine resistance sevenfold, and was the next strongest association they found in one of the first studies examining factors related to vaccine hesitancy among a large African American community sample, says Moore, corresponding author of the study published in a special edition of the journal Vaccines.

“These findings highlight an important issue and necessity for innovative and proactive approaches in reaching two vulnerable populations: the younger (African American) population that may believe that their risk of severe COVID-19 and mortality are low due to their youth and little to no chronic medical conditions, and participants with housing insecurity due to COVID-19 who may have limited or no reliable interactions with health care systems,” the investigators write.

While reduced vaccine hesitancy among African Americans may result from increasing vaccination rates of all Americans, health care systems and organizations must still work to build trust and rapport with these communities with increased diversity of medical professionals, community services and transparency about vaccine facts, concluded the investigators, which included colleagues at the Department of Behavioral Health Sciences at Saint Louis University in Missouri.

The research team surveyed 257 adults living in Augusta, and the surrounding communities of Hephzibah, Georgia and North Augusta and Aiken, S.C., during six events starting Dec. 5, 2020, a little more than a week before the first person in the United States, ICU nurse Sandra Lindsay from New York City, received the vaccine, and running through April 17, 2021.

The community events were held by 100 Black Men of Augusta, a not-for-profit organization focused on improving people’s lives, in collaboration with MCG, the state’s public medical school, to bring information and eventually the vaccine directly to those communities.

“We are trying to meet people where they are, and trying to break down barriers in the sense of having health care providers that look like them who are going to have real conversations with them about why they may be hesitant and what questions they have,” Moore says.

The gatherings were mostly in Black churches and barbershops, so nearly 100% of those taking the anonymous, three-page survey were African American. Investigators asked about a wide variety of demographics like age and education and about health behavior like current alcohol or cigarette use and whether they took the flu vaccine. They also asked COVID-specific questions like whether they wore face masks or had lost a job or home.

They classified responders as resistant, hesitant or acceptant of receiving the new COVID-19 vaccines.

They found about one-third, 31.9%, were hesitant or resistant to receiving a vaccine. Those hesitant were more likely to be young, a median age of 31, while the median age of the acceptant individuals was 61. A greater percentage, 57.1%, of those considered resistant, were female, and they were more likely to be employed full time but less likely to have health insurance. They had fewer comorbidities, like high blood pressure and diabetes, compared to acceptant individuals, but were also more likely to be smokers than those in the other two categories and less likely to have ever received a flu shot. Those with more chronic health problems, like high blood pressure, were least likely to be vaccine resistant.

Among the resistant, 33.3% reported housing insecurity, compared with 10% and 6.9% for hesitant and acceptant participants, respectively.

About half the participants also had not been tested for the novel coronavirus when they were surveyed, more evidence that “public health prevention strategies and infrastructures have largely failed to protect communities of color, low-income neighborhoods, essential workers and those with variable employment status,” the investigators write.

Moore expected hesitancy to be more homogenous across the African American individuals surveyed because of the untenable history they share.

Lack of trust resulting from medical exploitation and abuse is connected to ethnicity, and racial inequities have undoubtedly contributed to the disproportionate COVID-19 disease burden on African American individuals, Moore and his colleagues say.

“There are systemic issues that have disproportionately affected Black and brown communities for a long time in this country,” he says, noting that both Black men and women have a higher allostatic load — where challenges faced exceed the ability to cope — at a younger age compared to their non-Hispanic white counterparts.

“Allostatic load is the wear and tear on the body due to external stressors that happen within your environment over a life course,” Moore says. That stress results in chronically higher levels of the stress hormone cortisol which increases inflammation, which increases blood pressure and a host of other health problems from heart disease to cancer.

“If one group is under elevated stress simply because of their complexion, compared to their counterparts, their reaction to everything is going to be different,” he says. “It’s going to explain some of the environment-gene interactions we are seeing,” and so do cultural differences like unhealthy diets passed down for generations, Moore says.

The pandemic, which has been stressful for everyone, highlights these areas of concern, Moore adds.

To identify the best way to help those most affected, the investigators are now taking the key factors of hesitancy they found and having targeted conversations to find the reasons behinds them, he says.

At the moment, the investigators can only make hypotheses about their findings. For example, younger individuals may be more susceptible to misinformation and disinformation on social media and online. “There may be low self-perceived risk among the young demographic, the: ‘I personally don’t fear this disease therefore I don’t see the see the need to get the shot,’ coupled with misinformation regarding COVID-19, which further complicates this paradigm,” Moore says.

Housing insecurity, which was such a prominent factor, may be associated with lower socioeconomic circumstances, including working in frontline jobs that may increase potential exposure and limit the ability to take protective precautions, Moore says. In his conversations with other young people, Moore also hears the recurring issue of ‘time,’ that they need more ‘time’ to ensure the vaccine is safe.

The “Georgia Black Belt” which runs from the Southwest corner of the state through middle and central eastern Georgia, where the Augusta area is located, has a wide range of health disparities in common conditions like stroke, cardiovascular disease and cancer, as well as infectious diseases like COVID-19.

But the vulnerability of these areas and residents was not recognized early in the pandemic, which delayed mitigation efforts like ensuring access to personal protective equipment. Subsequent delays in availability of testing and later vaccination, they write, grew the significant body of evidence of the effect of racism on health behaviors and outcomes. The growth, particularly of online sources of misinformation about both the disease and the vaccine, have further fueled the deleterious impact of these inactions, Moore says.

“To maximize the efficacy of a vaccine, you want nine out of 10 people saying they will get it,” Moore says. “We had more than 30%, about one-third, saying they are not going to get vaccinated. We wouldn’t be here if we would have had a larger uptake of the vaccine within the first three or four months of it being available. We wouldn’t have the issues we’re seeing regarding increasing rates of COVID-19 infection.”

He notes that as they began their meetings and surveys, little was known about the vaccine, but they had good information about safety and efficacy by the subsequent gatherings. The Georgia Department of Public Health received its first vaccine shipment Dec. 14, 2020, the same day the first person in the country was vaccinated, and the first peer reviewed study about the vaccine was published two days later.

In August the number of vaccinated Americans was reaching 170 million, or about 50.8% of the population, but as late as early June less than a quarter of Black Americans had received their first vaccine dose, although some recent reports indicate the rate of vaccination among Black and Hispanic populations is starting to improve. Previous studies have indicated that Black Americans are three times more likely to be unsure or unwilling to receive the vaccine compared to whites.

The research was funded by the National Institute on Minority Health and Health Disparities of the National institutes of Health.