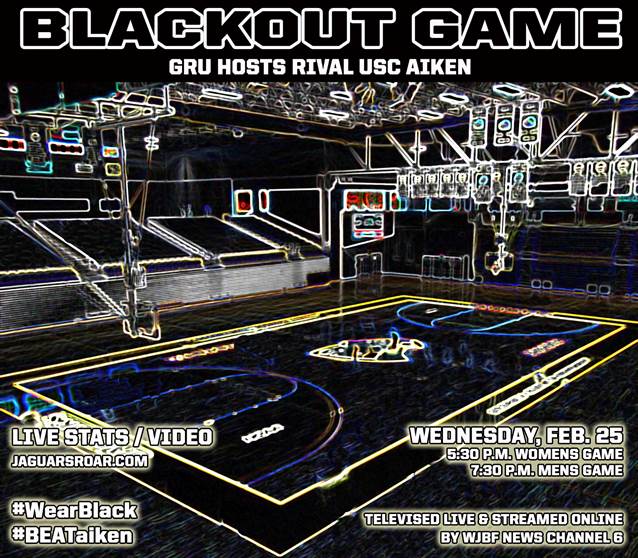 The final regular-season game for the GRU Augusta men’s basketball team will be a BLACKOUT on Wednesday, Feb. 25 against rival USC Aiken in Christenberry Fieldhouse and it will be televised live by WJBF News Channel 6 and streamed live online. All fans are encouraged to wear black!

The Feb. 25 game with USC Aiken, will mark the second consecutive televised game for the Jaguars, with CBS Sports Network having nationally televised GRU’s Salute to the Military game in 100 million homes on Feb. 21 for Military Appreciation Day.

This is also the second year that GRU Athletics and WJBF have collaborated for a televised production, after the Jaguars’ 2013-14 matchup with the USCA Pacers was televised on Feb. 26, 2014.

GRU (22-5, 14-4 PBC) are rolling on a 10-game win streak and are currently ranked fifth in the Southeast Region. The Jags already downed the USCA Pacers once this season in a 77-66 game in the Convocation Center. GRU blew a 19-point first half lead, but withstood the comeback down the stretch to hold off their rival for another win. Senior Devon Wright-Nelson ended the night with 21 points and 11 rebounds, while sophomore Keshun Sherrill paced the team with 22 points. The Jags shot 47.2 percent from the floor to USCA’s 38.2 percent. After owning the rebound advantage at the half 21-16, the Pacers dominated the glass in the second and won the final rebound battle 38-33.