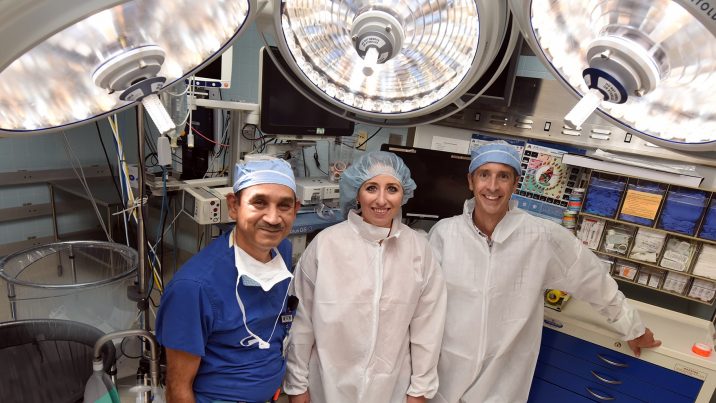 In the face of obesity, the sex hormone progesterone that helps females get and stay pregnant appears to also put them at increased, early risk for cardiovascular disease, investigators report.

Premenopausal women are considered protected from cardiovascular disease, but evidence indicates obesity can negate those benefits, and in fact puts them at even higher risk than men, but just how remains an unfolding mystery.

“The question we had is exactly what is happening with these young women,” says Dr. Eric Belin de Chantemele, physiologist in the Vascular Biology Center and Department of Medicine at the Medical College of Georgia at Augusta University.

As they walk down the path to how their protection is lost, investigators have now documented high levels of a receptor for the hormone aldosterone, which can damage the vasculature, in the endothelial cells that line blood vessels, and that progesterone enables the high levels of receptor expression they found, says Belin de Chantemele.

The latest findings, published in the journal Hypertension, were consistent in both animal models and, for the first time, in human blood vessels as well.

Corresponding author Belin de Chantemele and his colleagues reasoned and have now confirmed that females just have higher expression of these mineralocorticoid receptors on endothelial cells. Females also have naturally higher levels of the hormone aldosterone, and in the face of obesity, produce even more of the hormone, which is bad for blood vessels at these now very high levels. At high levels, aldosterone, which has a direct effect on blood pressure by regulating salt-water balance in the body, prompts inflammation, stiff and scarred arteries, enlargement of the heart and more, but how the hormone levels get so high in obesity was among the unknowns.

An earlier starting point for this perfect storm appears to be the fact that fat produces the satiety hormone leptin, and women generally produce more leptin per ounce of fat than men. With obesity, men and women both obviously make more leptin because they have more fat tissue, but the brain stops listening to leptin’s signal that we are full and the cardiovascular system starts paying more attention.

In males, leptin activates the sympathetic nervous system, the so-called fight or flight system that gets hearts beating faster and blood pressure up, but that system is not typically activated in younger females even in the face of obesity. In their search to find what was happening in these females, the MCG team found the “sky-high” aldosterone levels in their research models.

Belin de Chantemele and his colleagues reported in Circulation in 2015 that in females, higher leptin levels prompt the adrenal glands to make more of the hormone.

Their findings at that point already were pointing toward targeted intervention for premenopausal women with obesity and, in fact, there are already older drugs, like the diuretic spironolactone, that target aldosterone by blocking its receptor. The newest findings appear to strengthen the target.

They had reasoned that like naturally higher levels of aldosterone, females also have more receptors for that hormone on their endothelial cells.

They again found they were correct in their animal models and, for the first time, in human blood vessels as well, removed during the usual course of surgery by MCG cardiothoracic surgeon and coinvestigator Dr. Vijay Patel.

“As clinicians, we are always asking why patients develop this,” says Patel, who has been performing cardiothoracic surgery for two decades. He notes more recent years have seen a shift toward more female patients generally — now about one-third of the patients he operates on at AU Medical Center — and they are often relatively young and also are overweight or obese. They also often have other compounding factors like diabetes and smoking.

To better understand sex differences in the disease process that can land patients in the operating room, the investigators deleted either the mineralocorticoid receptor or the progesterone receptor in female mice.

They found both deletions prevented the blood vessel dysfunction that usually followed, which illustrated a clear partnership between the two. But it was progesterone really driving the sex differences in the expression of mineralocorticoid receptors on endothelial cells. In fact, just knocking out the progesterone receptor also suppressed the aldosterone receptor, says postdoctoral fellow and first author Dr. Jessica Faulkner.

When Faulkner removed the ovaries — which produce both estrogen and progesterone — female mice had essentially equal numbers of mineralocorticoid receptors on endothelial cells as their male counterparts. Then she gave back the female sex hormones estrogen and progesterone, both separately and together, at levels similar to what is found in birth control pills.

She found it was progesterone, not estrogen, which restored the typically higher expression of these receptors in females. Adding progesterone to human endothelial cells invoked a similar response.

“Basically we think that progesterone is some sort of evolutionary mechanism for sustenance of an increased mineralocorticoid receptor expression in the vasculature of females,” she says. That may tie back to reproduction and pregnancy because progesterone is high in pregnancy and vascular tone is important to both baby and mother.

When obesity is not a factor, high levels of both are probably not a bad thing, she adds. The investigators don’t know yet if progesterone also increases with obesity but there is evidence that generally, obesity throws off the balance of hormones, and they are looking specifically at progesterone now. They note there may be other factors besides progesterone and obesity driving increased aldosterone receptors in the endothelial cells but at this point, it looks like it’s only happening in females. Another factor they are looking at is high blood sugar. They also want to know whether factors besides higher leptin levels can drive higher aldosterone levels in these females.

The strength of their newest study comes from the cooperation of Patel and patients, where they have been able to see that what they are finding in animals holds up in humans, Belin de Chantemele says.

Better care for patients with cardiovascular disease, the No. 1 killer in Georgia and the United States, is definitely the bottom line, says Patel.

“We know there are certain risk factors we can help modify but there is a lot more beyond the five predominant risk factors that we see,” Patel says of contributors like high cholesterol and smoking.

The heart surgeon would like to see studies on young women with obesity who are taking a mineralocorticoid receptor blocker, versus more commonly prescribed medications for problems like high blood pressure, and compare their impact on disease development. Pulling this kind of data out of large studies that already have been done likely would be a more rapid way to see if the promising work of his research colleagues continues to play out in human studies.

The research was funded by the National Institutes of Health and the American Heart Association.