Walk this way: Chicken movement holds clues to how they spread disease 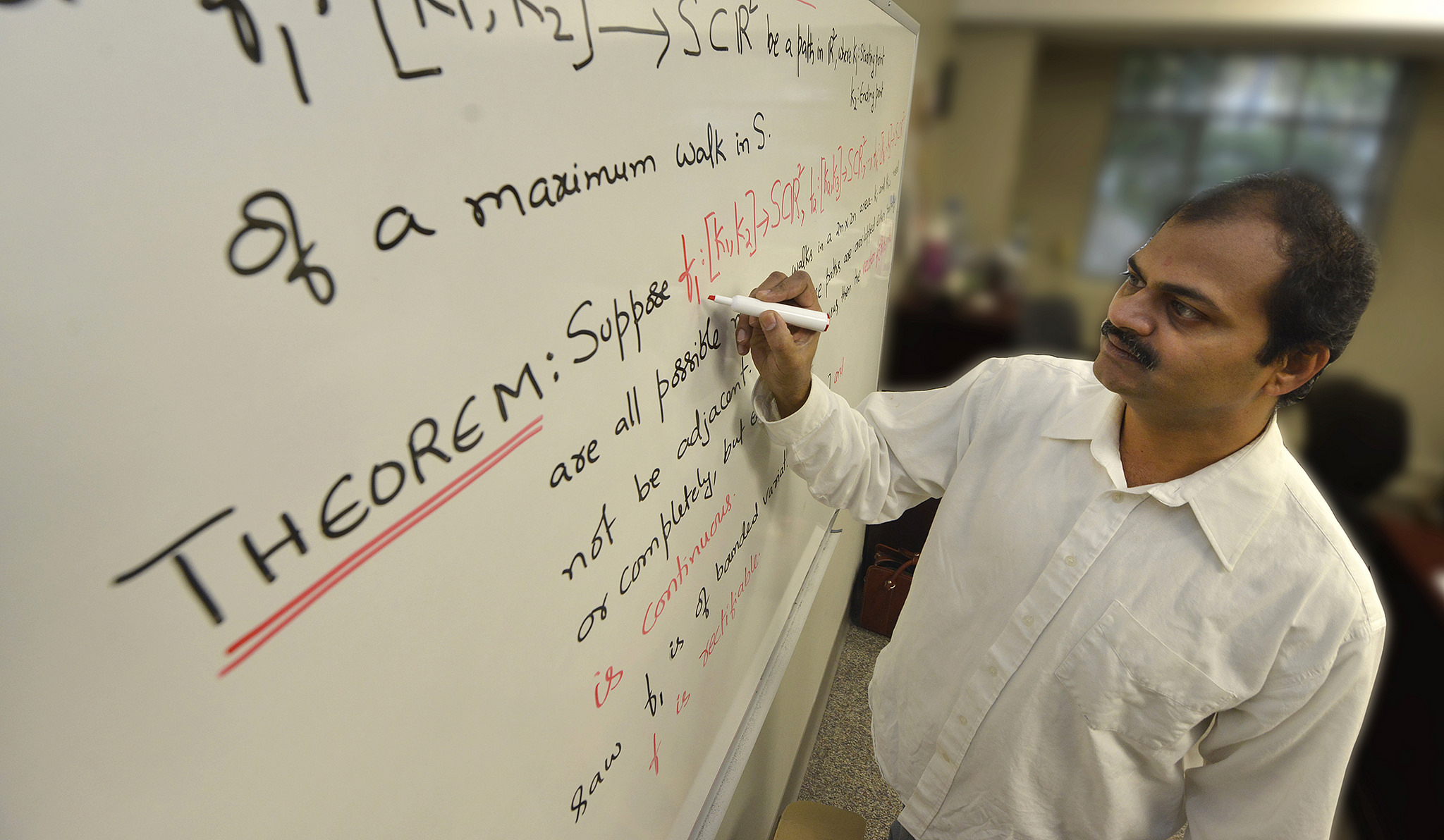 AUGUSTA, GA. – Plotting on a grid just how a chicken walks may one day give farmers more insight into how best to protect their flock from non-airborne pathogens that can also hurt their profit.

“What this mathematical model tells you at this minute is how a chicken walks, meaning its pattern, how it moves around a pen,” said Dr. Arni S.R. Srinivasa Rao, a mathematical modeler in the Department of Biostatistics and Epidemiology at the Medical College of Georgia at Georgia Regents University.

“It’s a first step in learning more about how they spread infection and how best to address that,” said Rao, corresponding author of a study in Mathematical Methods in the Applied Sciences.

While the resulting complex series of letters, numbers and symbols Rao has developed are likely a mystery to non-math aficionados, they basically show, not the gait, but the walk patterns of the chicken in a pen. Laid out on a grid, the paths chickens take from say the corner of the pen to the food bowl and back, look like a colorful albeit confusing racetrack. But by plotting the patterns and multiplying them by the number of chickens in a pen, the mathematical model may help clarify quite literally how many ways/times chickens cross each other’s path – and re-cross their own – and the likelihood of disease spread that results.

“We want to know whether we can predict the infectivity level of a particular pen from how the birds are moving,” said Rao, who thinks the answer is “yes.” When chickens fall out of their usual patterns, that could be an indicator of disease as well, Rao added. In fact, similar models could be developed for pretty much any farm animal, which commonly spread disease among themselves and sometimes to humans.

Next steps include taking the chicken walk model back to the pen to test whether it is an accurate predictor of at least one infection that costs poultry farmers billions annually. Eimeria is a pathogen that is easily and rapidly spread among farm animals. It attacks the lining of the intestines, causing chronic diarrhea, weakness and weight loss, in roughly 3 percent of chickens. Rao wants to help farmers know how long it takes that small percentage to reach 100 percent in a chicken pen in an effort to minimize loss.

While it’s likely that a poultry farmer would isolate any sick chickens he spots, in large poultry farms, that sort of individual inspection just may not be doable, Rao said. Individual or even random testing for disease could be costly and time-consuming as well. By giving farmers a mathematical heads up that a pen is at high risk, sick birds can be culled and others potentially treated. His goal would be for the farmers to take video, which most already get for security surveillance, and, possibly through animation, easily translate walk patterns they see on the video into infectivity risk without ever having to pick up a calculator.

In collaboration with Drs. Fiona Tomley and Damer Blake at The Royal Veterinary College at the University of London, Rao studied chicken pens in both India and England. He noted how often the chickens eat and drink, how much time they spend moving and resting, how far they moved, how often and where they defecated, as well as the paths they follow to get to the food and drink, looking for distinct patterns that increase the risk of infection.

Not surprisingly, he found plenty of opportunity for disease spread. Chickens keep walking as they defecate, so often walk right through their own feces and/or other chickens’. They can get feces on their beaks when they peck the ground then spread it to the water when they take a drink.

Chickens tend to have distinct walking patterns, he notes. The most common Rao witnessed were moving diagonally across the pen or constantly crisscrossing, while others tend to be more sedentary, mainly roosting near food and water supplies.

A number of treatment options exist today for Eimeria parasite, although drug resistance and cost remain a problem. Vaccines currently exist, but there are problems with inconsistent levels of immunization in a flock as well as geographic variations in the species of the Eimeria, according to a 2014 review in Veterinary Medicine: Research and Reports.

Rao has a joint appointment in the GRU Department of Mathematics in the College of Science and Mathematics. He started the work with veterinary scientists while a faculty member at the Indian Statistical Institute in Kolkata. The research was funded by the Biotechnology and Biological Sciences Research Council in the United Kingdom.