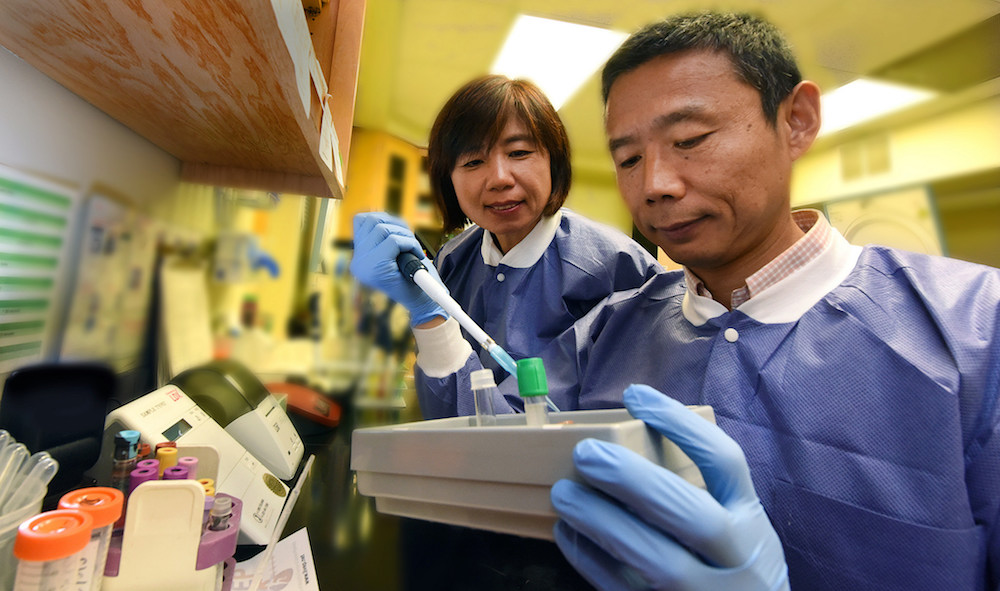 AUGUSTA, Ga. – Low levels of vitamin D in black teens correlates with low activity of a major mechanism for controlling gene expression that may increase their risk of cancer and other disease, researchers report.

Their study measured vitamin D levels as well as levels of global DNA methylation in 454 healthy individuals age 14-18. In this group, 99 percent of the white teens had adequate vitamin D levels, 66 percent of the black teens were vitamin D-deficient and all the black teens had lower levels of methylation compared to their white peers, said Dr. Haidong Zhu, molecular geneticist at the Georgia Prevention Institute at the Medical College of Georgia at Augusta University

When they looked at another group of 58 young black individuals also with low vitamin D and methylation levels who received varying doses of vitamin D supplements for 16 weeks, they found a dose response: the more vitamin D received, the higher the methylation activity, said Zhu, corresponding author of the study in the journal PLOS ONE.

“While much work remains, there appears to be a connection between healthy vitamin D levels and levels of DNA methylation,” Zhu said.  “We want to understand underlying mechanisms for how vitamin D insufficiency causes cancer, cardiovascular disease and immune system problems.”

While vitamin D deficiency is well-known to be more common in black individuals, who are also known to have generally have lower rates of global DNA methylation, this is the first study to begin to tie those two pieces together, said Dr. Yanbin Dong, geneticist and cardiologist at MCG’s Georgia Prevention Institute and the study’s senior author.

Global DNA methylation is essentially a chemical alteration in the function of your DNA, a natural process that helps you adapt to your environment. But it can be adversely affected by age, environmental exposures, even disease and genetics, Zhu said. Low levels of methylation, or hypomethylation, generally leave your entire genome more vulnerable to environmental damage, such as oxidative stress, and disease, Zhu said.

The result, for example, can be some bad genes get turned on, like so-called oncogenes, while tumor-suppressing genes get dialed down. “Basically more things can go wrong,” Zhu said. “Methylation is kind of like a brake that controls gene expression,” Dong said. “If that brake is removed or damaged, the gene can go in all kinds of directions, and most of the time, it’s unfavorable ones.”

There is plenty left to understand, Zhu and Dong agree. Next steps include defining which methylation sites and genes are impacted by low vitamin D. They also need to know whether differing methylation rates in the two populations are really because of genetics or are vitamin D dependent.  In fact, the normal methylation levels for black individuals remain an unknown and the apparent connection they just made between low rates of methylation and low vitamin D levels is not well-understood.

It is known that black individuals generally have higher rates of cardiovascular disease and cancer. There is some evidence that vitamin D can increase expression of some tumor suppressor genes while increasing methylation of LINE-1, a series of elements of DNA that is repetitive in the human genome and so makes up a significant percentage of it. Reduced methylation of LINE-1, for example, has been linked to greater risk of recurrence of colon cancer in a study also just published in PLOS ONE and led by researchers from the Kaohsiung Medical University College of Medicine in Taiwan.  In fact, low levels of methylation are associated with a wide range of cancers.

The receptor for vitamin D, originally found on bone cells, is actually ubiquitously expressed on all cell types, Dong said.  That means that too little vitamin D can have a wide-range of health effects, from increased inflammation and blood vessel constriction to pancreas and kidney problems and cancer. In fact, a current theory is that this fat-soluble vitamin directly regulates 3-5 percent of the human genome, Zhu said.

The skin, the body’s largest organ, absorbs vitamin D and the liver and kidneys convert it to calcidiol and calcitriol respectively.  Calcidiol is the precursor of calcitriol, which is a form of vitamin D the body can use.

“Days like this, you don’t have enough vitamin D synthesized through your skin,” Dong said on a recent, cloudy day. While dermatologists likely would argue because of the risk of skin cancer and other damage, Dong said 15 minutes of “young” sunlight, between 9 a.m. and 2 p.m., daily should provide enough exposure for your skin to manufacture adequate vitamin D. Sunscreen can stop this production and darker skin also makes absorption less efficient, he said. Milk and milk products, salmon, tuna and mackerel also are good vitamin D sources.

The research was supported by the American Heart Association. Mass spectroscopy was used to measure fasting blood levels of vitamin D in study participants.