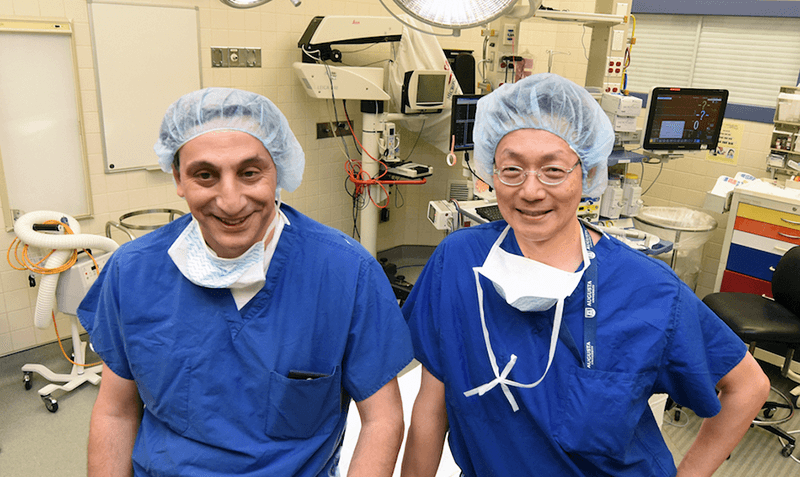 The mouth is widely considered the dirtiest part of the human body, yet babies have surprisingly low infection rates following cleft lip and palate surgery.

Now, researchers have the first evidence that one reason may be the presence of what they call the SWAT team of immune cells.

They examined lip tissue removed during cleft lip repair of 13 babies at Children’s Hospital of Georgia. They found innate lymphoid cells, or ILCs, a type of immune cell that functions like a natural antibiotic to recognize and attack invaders like bacteria. In the average mouth, where hundreds of types of bacterium have been documented, there is plenty to target.

“Their presence helps explain why we don’t have more surgical site infections than we do,” said Dr. Jack Yu, chief of pediatric plastic surgery at MCG and director of the Craniofacial Center at CHOG.

Scientists began to report about ILCs in 2008 and 2009 and their ability to defend against infection and aid wound healing. Like our natural killer cells, they are essentially born ready for action. Other, so-called adaptive immune cell types need to be educated on what to attack, typically by exposure to it, and develop receptors and a memory for these so-called antigens, said Baban, the study’s corresponding author.

The need for education leaves babies with immature adaptive immune systems for their first few months of life, said Baban, which is when levels of ILCs appear highest. While present throughout life, it’s early on that ILCs appear particularly vital: “When you knock these guys out, you are dead,” Yu said of attempts to create animal models in which the fast-reacting cells had been removed. Conversely, levels seem to drop with age, possibly as adaptive immune cells mature and take on some of their responsibility, Baban said.

Yu has been doing cleft lip and palate repair nearly 25 years, and he and Baban decided to team up to explore the surprisingly low rates of surgical site infection considering the amount of bacteria found in even the cleanest, healthiest mouth. While the bacteria count would support infection rates more like 5-7 percent, rates today are under 1 percent, said Yu, a study coauthor.

Their research found all three types of ILCs – types 1, 2 and 3 – in the lip tissue, but mostly type 2, which is more good news since it typically functions like the director of the SWAT team, Baban said. “Type 2 basically dictates to the other cells how they should behave, how they should function,” he said of the always-hierarchical immune system.

While they were the first to document ILCs in the mouth, the researchers weren’t really surprised to find the cells there. Shortly after birth, fast-acting ILCs appear to populate babies, particularly concentrating on the alimentary canal, which is the path that food follows and where their maturing immune system is housed, said Baban.

The cells gather in barrier surfaces like the mucosal lining of the intestines, airways as well as skin, the body’s largest organ, and pretty much any place that comes in contact with outside substances from food to water to other humans, Baban said.

The researchers’ current and future studies include comparing cell numbers in young and older healthy mice. Baban also is looking at the potential role of these cells in a range of diseases from gum disease to melanoma and traumatic brain injury with the long-term goal of giving patients doses of these cells to better combat their disease. This will include identifying which ILCs naturally fight which infection and/or disease. A dose of these cells may even one day replace an antibiotic before surgery and help combat the epidemic of antibiotic resistance, Baban said.

Unlike manmade antibiotics, ILCs continue to recognize a bacterium, for example, that morphs to escape the drug’s attention. “Our antibiotics are no good after two years. These cells have been around billions of years and still are,” Yu said.

The babies whose tissue was examined were an average of 6 months old and had routine reconstructive surgery of their cleft lips. Five of the babies also had a cleft palate that was later repaired. The researchers immediately put the lip and mucosal tissue removed as part of the cleft lip repair into a saline solution and took it to the lab for examination.

Cleft lip and palate are the most common birth anomaly and occur in about 1 in 700 births. Babies essentially have holes in these areas where either formation was incomplete or tenuous and broke apart, Yu said. Known risks include the mom smoking or drinking during pregnancy and taking certain drugs, including anticonvulsants and some acne drugs.

Depending on their severity, the birth defects can cause a range of dysfunction, including trouble eating, drinking and speaking as well as aesthetic concerns and related psychological problems. Yu, who is editor of the Cleft Palate-Craniofacial Journal, generally considers age four months an optimal time for surgical repair.

Dr. Erika Simmerman, a surgery resident at MCG and Augusta University Health, is the study’s first author. Researchers at the University of Southern California, Los Angeles, Department of Molecular Microbiology and Immunology also are collaborators.