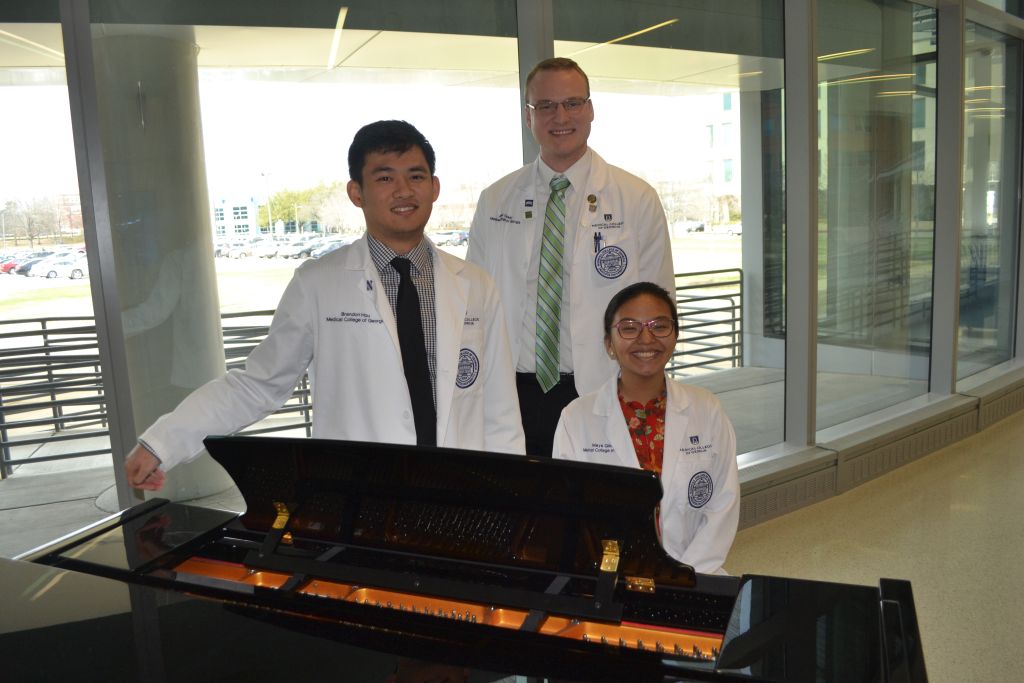 For an hour on select Fridays, four Medical College of Georgia students trade in their text books for musical instruments to perform in the lobby of the Children’s Hospital of Georgia.

They’re as adept at playing selections from Disney hit movies like Moana and Tangled as they are classics like Pachelbel’s “Canon in D.”

“It’s kind of a cool experience. People walk by and are like, ‘I recognize that tune,’ so they’ll stop and listen,” said violinist Maya Gibson. “We have a lot of support from the hospital and our faculty, so that’s important.”

The quartet is rounded out by cellist James Dickey and violinists Brandon Hou and John Latremouille. Each is of the MCG Class of 2021 and discovered their shared passion for music during a student social mixer.

“I was trying to figure out some way to keep playing cello while in school, but it’s way more fulfilling to play together,” said Dickey.

And just like that, their club, Music in Medicine, was born. Dickey is the director, Gibson is assistant director and Hou is the volunteer coordinator.  Music in Medicine performs as part of Music at Midday, an arts program that began with a husband and wife volunteering to perform last November.

“From there, we realized how impactful music was and the official program was born. We love to have a variety of talents. We have had singers, pianists and violinists,” said Augusta University Health Volunteer Engagement Coordinator Brooke Rappaport.

Music has long been recognized as an effective form of therapy to provide an outlet for emotions, and researchers are studying how song, sound frequencies and rhythm can treat physical ailments. Studies have found that music improves the body’s immune system, function and reduces stress, according to the American Psychological Association.

“You don’t know why people are in the hospital, so just to see them smile … that’s the biggest reason why we play,” said Hou.

Written by Haley Hughes
Augusta University enters Summoner’s Rift for 2018 season
FacebookTwitterPinterestWhatsApp
Are you a teacher or interested in becoming one? Don’t miss the ISL conference on Feb. 24.