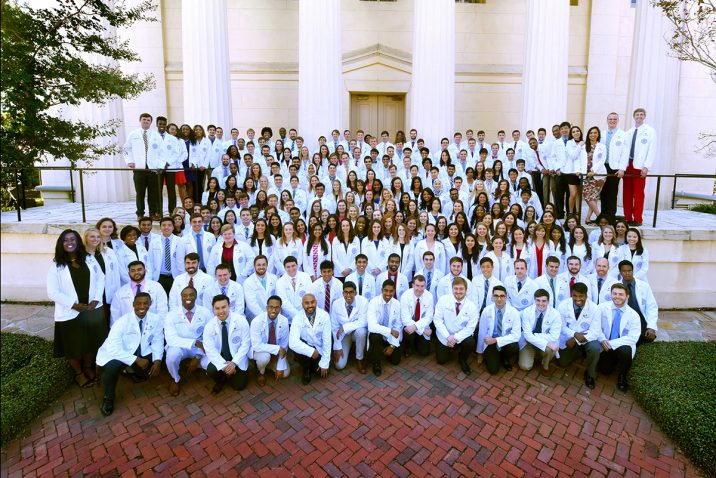 Next year the Medical College of Georgia at Augusta University is further expanding its class size — already one of the largest in the nation — to continue to address the physician shortage in one of the country’s most populated and fastest growing states.

The main campus in Augusta will grow from 190 to 200 students per class in August 2021 and the Augusta University/University of Georgia Partnership Campus in Athens will increase its class size from 50 to 60 students.

“As the state’s medical school it is our mission and our responsibility to address the state’s growing physician shortage,” says MCG Dean Dr. David Hess. “We not only need to grow the number of physicians we educate, but we also need to find ways to keep them in Georgia, especially underserved Georgia, to practice once they graduate and complete a residency program in their chosen field.”

Georgia remains one of the fastest-growing states in the country. The state’s 10-year growth rate of 14.4% is more than 1.5 times that of the U.S. population growth rate and population projections forecast a 17.7% increase in Georgia’s population by 2030, according to the Georgia Department of Economic Development.

Yet Georgia ranks near the bottom — 39th — in the number of physicians per capita, according to data from the Association of American Medical Colleges.

“There is a significant physician shortage that continues to be a health problem for Georgia,” says MCG Vice Dean for Academic Affairs Dr. D. Douglas Miller. “But the distribution of doctors also continues to be an issue. We’re working to try to ensure that more physicians practice in the areas of the state with the greatest health needs.”

Nine of the 159 counties in Georgia have no physician. The numbers are worse when it comes to frontline primary care physicians – 18 counties have no family medicine physician; 32 no internist; 60 no pediatrician; 74 no general surgeon; and 76 no OB/GYN.

The medical school’s growth in class size and an innovative new curriculum aim to change that.

Beginning with the MCG Class of 2024, which started in August, the medical school’s 3+ curriculum provides a more efficient pathway into primary care for a percentage of its students. The MCG 3+ Primary Care Pathway would see some students graduate in three years and enter directly into a Georgia primary care residency program. In exchange for a service commitment to an underserved area of the state, and dependent on future funding, those students would receive a scholarship to cover their tuition.

“It is the deliberate responsibility of the state’s public medical school to bear the brunt of workforce development in support of the state’s physician workforce needs,” Miller explains. “We have to be deliberative about growth. Until we revised the curriculum and created the MCG 3+ Program, we couldn’t balance growth and distribution of doctors. This is the right time to do both for Georgia.”

The planned expansion to 60 students per class in Athens and 240 per class in Augusta over the next five years is part of the initial recommendation of a 2008 report by nationally recognized consulting firm Tripp Umbach, which called for an expansion of undergraduate medical education in Georgia.

Miller says more graduate medical education programs opening in Georgia also made this the right time for an increase in the number of students at MCG. The University System of Georgia established the GME Regents Evaluation and Assessment Team, or GREAT Committee, in 2015. Chaired by Dr. Shelley Nuss, campus dean at the Medical Partnership, the committee has worked to add more than 574 new GME positions, with a projection of 734 by 2025.