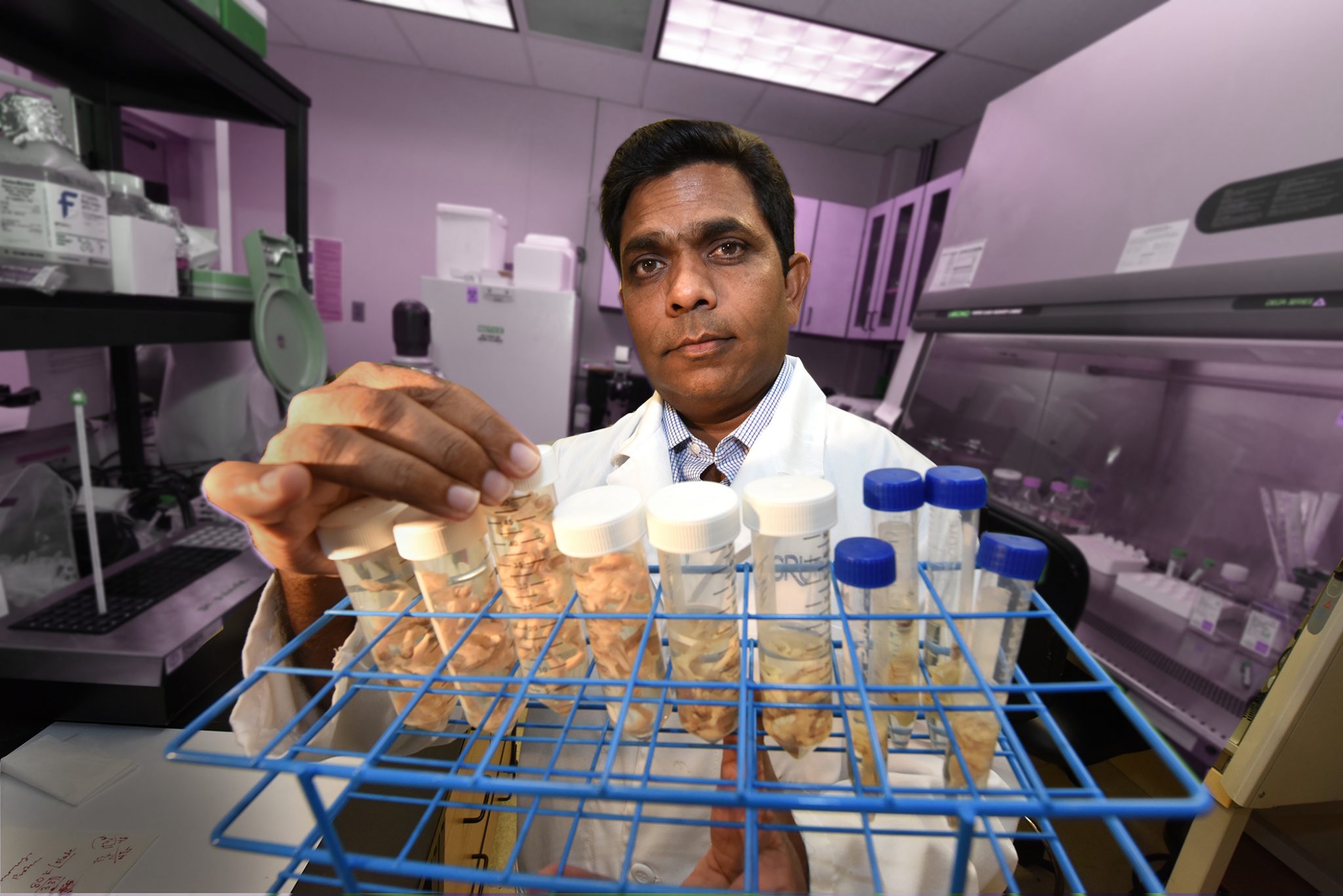 With age, expression of a small molecule that can silence others goes way up while a key signaling molecule that helps stem cells make healthy bone goes down, scientists report.

They have the first evidence in both mouse and human mesenchymal stem cells that this unhealthy shift happens, and that correcting it can result in healthier bone formation.

The small molecule is microRNA-141-3p and the signaling molecule is stromal-cell derived factor, or SDF-1, they report in the Journal of Gerontology: Biological Sciences.

“If you are 20 years old and making great bone, you would still have microRNA-141-3p in your mesenchymal stem cells. But when you are 81 and making weaker bone, you have a lot more of it,” says Dr. Sadanand Fulzele, bone biologist in the Department of Orthopaedic Surgery at the Medical College of Georgia at Augusta University.

Restoring a more youthful balance could be a novel strategy for reducing age-associated problems like osteoporosis and the impaired ability to heal bone breaks, says Fulzele, a corresponding author on the study.

“You want it sort of in that sweet spot,” says Dr. William D. Hill, a  longtime stem cell researcher at MCG now on the faculty at the Medical University of South Carolina. “What we are trying to do is dial it back down from where it’s being overexpressed due to factors like aging and oxidative stress and suppression of estrogen, and bring it back into a range that would effectively allow more normal bone formation,” says Hill, also a corresponding author.

About 30 percent of postmenopausal women in the United States and Europe have osteoporosis, according to the International Osteoporosis Foundation. At least 40 percent of these women and 15-30 percent of men will sustain one or more fractures in their lifetime, the foundation says, and one fracture puts them at increased risk for others.

Mesenchymal stem cells can differentiate into the major components of our skeleton: bone-forming osteoblasts; actual bone cells or osteocytes, made by osteoblasts; cartilage-cells called chondrocytes; as well as fat cells, or adipocytes.

SDF-1 is a key signaling molecule that helps regulate the differentiation of stem cells into these cells, the MCG research team has shown. SDF-1 has a myriad of other roles as well, including helping mesenchymal stem cells get to the right spot during bone formation and bone repair and protecting cells from the ravages of oxidative stress.

It was SDF-1’s clear significance in bone health — and the fact that it declines with age — that got the scientists interested in how it’s regulated. They hypothesized that decreasing SDF-1 is at least one way microRNA-141-3p impacts healthy differentiation of mesenchymal stem cells.

They suspected microRNA-141-3p as a culprit because Fulzele had already found it suppresses a transporter of vitamin C, which enables the vitamin to reach our cells once we eat foods like kale and Brussels sprouts. Vitamin C also is important for bone health, and without sufficient transporters, the vitamin instead starts to accumulate outside the cell where it generates destructive oxidative stress. The scientists also had already found it could hinder that important differentiation of mesenchymal stem cells and knew levels of microRNA-141-3p increase with aging. Their animal studies had indicated that oxidative stress in mesenchymal stem cells decreases SDF-1 and that the signaling molecule could protect those cells from death by oxidative stress.

Now putting the pieces together they speculated — and have found — that higher oxidative stress elevates microRNA-141-3p expression, which in turn decreases SDF-1 levels.

In both mice and human mesenchymal stem cells, they found levels of microRNA-141-3p were low in young cells but levels were tripled or more in older cells. They found essentially the opposite for SDF-1 levels.

When they injected a microRNA-141 mimic inside the stem cells, it essentially created a model of aging and SDF-1 levels again went down. Consequences of that included another shift that normally occurs with age as we make more bone-eating osteoclasts than bone-forming osteoblasts. The shift also resulted in mesenchymal stem cells making instead more fat, which they tend to do with age because it’s easier.

As part of testing their hypothesis from all directions, the scientists also added microRNA-141-3p to cells and watched bone function get worse, then used the inhibitor again and saw improvement.

Clinical-grade drugs, like the research drug they used to inhibit microRNA-141-3p and that might target other members of the micro-RNA 141 family as well, could one day be an effective way to help mesenchymal stem cells remain focused on making bone in the face of age and other conditions, Fulzele says.

At least in their cell studies: “It normalizes bone function. We think clinical-grade inhibitor may help us do the same in people,” the bone biologist says.

Hill says that a patch of endogenous or synthetic RNA could also be an option for precisely targeting errant microRNAS, which are usually the molecules doing the regulating.

They are now looking to move into animal models and look at a wide array of other factors like what happens to fat production, and can they improve fracture healing in a model of aging and/or prevent or at least reduce osteoporosis. Fulzele also wants to know if higher physical activity levels, which tend to diminish with age, can also help restore a healthier balance of microRNA-141-3p and SDF-1.

They also are looking at other members of the microRNA-141 family and how/if they interact with other family members to cause problems as we age, Hill says.

“We have identified a number of microRNAs that change in the bone marrow stem cells with aging and we are going after each one of these to understand how they are working and are they working together or independently,” Hill adds. “We are starting to take more of a biological systems approach, not just changing one target molecule, but looking at how this network of molecules is changed with age or disease and how we can reach in and sort of reset these different pathways.”

The scientists note that other genes also could be targets for this microRNA, since these molecular regulators typically target more than one gene.

Fulzele suspects lower levels of microRNA-141-3p in youth actually help fine-tune healthy bone formation — like a tiny turn of your radio dial would — and that it’s the high levels that make it bad for bone.

Even normal, healthy aging results in increased levels of oxidative stress, which includes things like reactive oxygen species that are byproducts of oxygen use.

The human stem cells the scientists isolated and analyzed came from 18-40 year olds and 60-85 year olds who had orthopaedic surgery.

The research was funded by the U.S. Department of Veterans Affairs and the National Institutes of Health. Read the published study.