Six years later: Meeting the donor who saved his life

A celebration filled with tears, hugs and smiles as two men, though intimately connected for six years, meet for the very first time. And it’s all thanks to a gift given selflessly by one man to save the life of a stranger thousands of miles away.

“It’s been very rewarding for me to get to know this person who is mostly responsible for me even being alive,” said Dixon Clark, a bone marrow transplant recipient. “It’s been a blessing to get to thank him in person.”

Clark’s battle with cancer started in early 2012 with a diagnosis of chronic myeloid leukemia (CML). Within 10 months, he learned he had acute lymphoblastic leukemia (ALL), too. And almost unbelievably, within that same 10-month period, Clark was diagnosed with skin cancer on two separate occasions.

“Those cancer diagnoses didn’t have any good thoughts associated with them,” he said. “But after learning I had CML, my faith in God started to grow and it helped me cope with each diagnosis that followed. I had already heard the c-word once, so I was better prepared each time after that first one.”

Early that same year, nearly 5,000 miles away, Richard Kiernan made a decision that put him on the path to this moment. At the time, all he was doing was looking for somewhere in Berlin, Germany, to donate blood.

“Donating blood was something I started doing after I saw my parents make their own donations,” he said. “I wanted to find something similar when I got to Germany. Unfortunately, there weren’t any blood banks nearby. My girlfriend at the time told me I should consider joining DKMS, which is the German equivalent of America’s Be The Match organization.”

Maybe a bit of Irish luck helped bring these strangers together: Kiernan grew up in Dublin, Ireland. Clark and his wife, Cindy, call Dublin, Georgia, home.

It was October 2012 when Dr. Vamsi Kota, director of the Bone Marrow Transplant program at Augusta University Health, told Clark he could cure him of the ALL. First, Clark spent 12 weeks in the hospital undergoing chemotherapy. The next step would be a bone marrow transplant. The search for a match started in January 2013.

“I’m a fighter and I told Dr. Kota we’d do what we had to do,” Clark said. “Sometimes, he’d try to explain some details, but I didn’t really want to know the details. I told him, ‘You’re the doctor and I’m the patient. You do your job and I’ll do my job.’”

“I had actually forgotten about joining the registry when I got the call,” Kiernan said. “It was actually about one year to the day of signing up. I said yes right away. I didn’t really have to think about it.”

With more testing required to determine whether Kiernan was the best match for Clark, it wasn’t until April 18, 2013, that he underwent the donation process. Then, 4.3 million of his stem cells traveled overnight from Berlin, Germany, to Augusta, Georgia, to be transplanted into Clark the next morning.

“It was important for me to help the good people in this world,” Kiernan said. “All I did was watch movies for three hours, so I did very little. I was part of a very large machine.”

Six years later, the two men met for the first time in-person when Clark and his wife, Cindy, picked Kiernan up at Hartsfield-Jackson International Airport in Atlanta. And while they had shared stories through email, it was a different feeling and experience to be face-to-face.

“As I was on the plane, I was like, ‘Holy crap I flew across the country to meet some stranger I barely know, except through email,’” Kiernan said. “But I wasn’t deterred or frightened. When I saw them standing in baggage claim, it felt like being picked up by an uncle and aunt. They were very warm people.”

Once he made it to Georgia, Kiernan got the opportunity to visit the Georgia Cancer Center with Clark, his wife and a few friends. For Clark, it was a chance to say thank you to people involved in his care. For Kiernan, it was a chance for the doctors, nurses and other support staff to thank him for a small gift that made such a big impact.

“It was surprising to me just how many people were involved in Dixon’s care and the amount of work they put in throughout the entire process,”’ Kiernan said. “And you could see the care and the love these people have for their patients. It put things in perspective about how passionate people are about making someone’s life better.”

Now, the two men are using their story to inspire others to sign up for Be The Match, the organization responsible for maintaining the national bone marrow registry. All it takes to become part of the system are four swabs of your cheek and a desire to help people who have been diagnosed with different types of blood cancers and disorders. Visit Be The Match to learn more and join the registry. 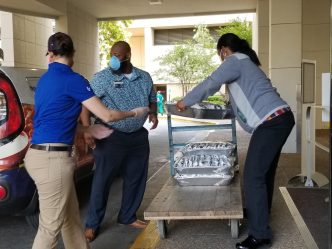