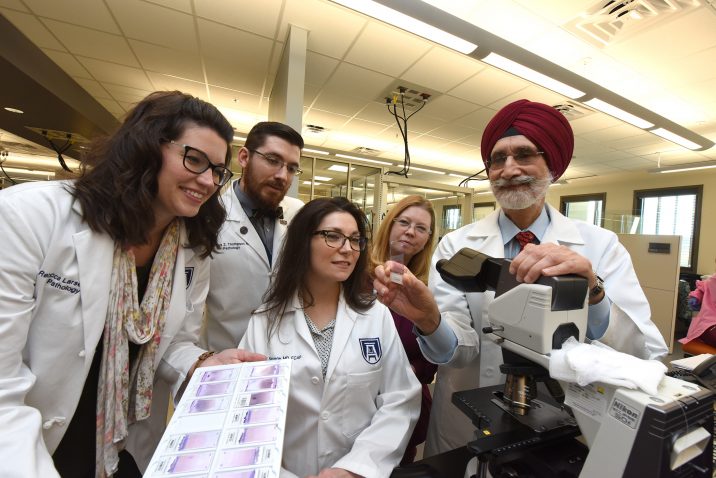 Investigators comparing some common bedside testing platforms to quickly determine how fast blood is clotting, called activated clotting time, or ACT, suggest other providers also compare results among the systems out there and use a more lengthy laboratory-based measure to confirm what they find.

“It’s like walking on a knife’s edge,” Dr. Thomas Z. Thompson, a third-year pathology resident at the Medical College of Georgia and AU Health. “You have to really get it within a certain range,” he says of the delicate balance of keeping the viscosity of the blood just right so it does not form clots that go to the lungs or brain and, conversely, does not result in bleeding.

Their perusal, published in the journal Laboratory Medicine, determined the iSTAT platform, which enables not just a bedside determination of ACT within a few minutes but can also provide results on a wide variety of other internal measures like sodium levels in the blood, a better overall option for streamlining patient care and proficiency testing.

Fast-acting heparin is the commonly used anticoagulant and ACT, the most commonly used measure to keep tabs on clotting time during treatments like cardiothoracic surgery and percutaneous, or through the skin, procedures to insert a stent to improve blood flow in the heart.

That way, caregivers know how much heparin is inhibiting the ability to clot so they can make adjustments, for example, if the operation is wrapping up. This “point of care” approach also has been shown to decrease the need for blood transfusions later, although it is generally more costly than tests done in the lab.

Point of care ACT measures are typically used in more critical situations where results need to be as close to real time as possible, Thompson says.

Critical situations include procedures like ECMO, or extracorporeal membrane oxygenation, which is generally performed as a lifesaving measure for babies and requires a lot of manipulation of the blood, including removing it from the body, putting it through a machine that adds oxygen and then back into the baby, Thompson says.

“If you have a concern post-surgery for a knee or hip replacement, there is a baseline anticoagulation we want to keep you at,” says Thompson. “But for big procedures like these, we anticoagulate patients to a much higher extent because we are taking blood typically right out of the patient, running it through a machine and giving it back to them. Artificial travel is much more a coagulant than the blood just passing through our bodies,” he says of procedures like ECMO and coronary bypass surgery, one of the most common surgeries performed in the United States.

The anti-coagulant heparin is quick acting, so patients can get it right before their procedure starts and once their anticoagulation level is adequate, it can begin. As things wrap up, caregivers in the operating room, as an example, can begin to reverse the heparin by giving another drug that binds to and eliminates it, so the patient gets back to baseline.

“These tests are done at the patient’s bedside versus coming all the way to the lab,” Thompson says, adding that the reduced time, from a few minutes versus about a half hour, is particularly important in critical care situations when results need to be as close to real time as possible. To do that well, point of care assessments are meant to be as simple and quick — and accurate — as possible.

So they compared head on several instruments commonly used to determine ACT.

This included two versions of the Hemochron analyzers, which provide an indirect measure of ACT, one that disrupts two magnets when a clot is formed and another that looks at impedance of flow between two optical sensors. While the Hemochron analyzers had the shortest of the short turnaround time for the point of care tests, the MCG investigators had difficulty obtaining consistent ACTs even when comparing results of two Hemochron instruments to each other.

The Hepcon system, which requires the most blood for the point of care ACT instruments they compared, basically uses a plunger, which is slowed by the increased ability of the blood to clot to indirectly calculate the ACT. Thompson uses the analogy of pushing your hand through gelatin versus water. It also calculates ongoing heparin levels and how much reversal agent that patient would need at that moment, one reason why cardiothoracic surgeons and anesthesiologists thought it might be more useful in patient care.

But since the test only provides a value of total heparin, not the physiologically active heparin, it was not of additional value for that reason, the investigators determined. However, its ACT results were consistent with iSTAT as well as the laboratory gold standard anti-Xa, which takes about a half hour to do compared with a few minutes and requires blood be taken to a lab for testing.

The investigators note that Hepcon has a particular niche for open-heart surgery with cardiopulmonary bypass where the patient’s body is cooled to decrease blood and oxygen needs of the body during surgery. Cooling can decrease the anticoagulation process and lead to patients being given too much heparin. Hepcon works well in this scenario because it provides both ACT and heparin concentrations at the bedside, they say.

The iSTAT instrument made by Abbott adds diatomaceous earth, which is essentially dirt, as a clotting activator, and a substitute for thrombin, a molecule found in our blood that can both promote or prevent blood clotting, to the few drops of blood to see how quickly a clot forms.

It’s considered a direct measure of what happens in our blood because it essentially mimics how thrombin interacts with fibrinogen, a major factor for blood clotting naturally, Thompson says. iSTAT takes a little longer than other methods of measuring ACT, they note, but its breadth of offerings helps streamline patient care and proficiency testing, they write.

They also note that the only recommended ranges for ACT are based on testing from Hemochron and another point of care test they did not study. For their studies, the iSTAT ACT measures were consistently lower than the other two tests. That likely means the clotting speeds were the same but the number assigned to that speed by each test was different, says Dr. Gurmukh Singh, vice chair of the MCG Department of Pathology, medical director of chemistry, toxicology, and point of care testing at AU Health Inc., and the study’s senior author.

The anti-Xa test, which adds a chemical that affects the color of heparin so it can be picked up by a sensor, is still a go-to test when there is no sense of urgency because of its accuracy, Singh notes. One example is checking the heparin levels on a patient with deep vein thrombosis who is getting a checkup but not having a procedure.

Typically at the bedside they only use one instrument to get the ACT, and Thompson and Singh now both suggest iSTAT.

Point of care testing reduces the number of people handling samples and the opportunity for samples to degrade before testing but can be more costly than standard lab testing.

While all the tests require just a few drops of blood, Hepcon, which is literally a larger instrument, uses a bit more, and iSTAT has the longest average turnaround time.

With ECMO, which uses similar heart-lung bypass technology, the baby is not cooled so ACT testing alone should suffice, notes Jennifer Chazelle, point of care manager at AU and a study coauthor. For these babies, point of care testing is performed every 30 minutes while they are being placed on ECMO, hourly for a period and then shifts to every two to three hours.

It tends to be the holder of the CLIA, or Clinical Laboratory Improvement Amendments program of the Centers for Medicare & Medicaid, license who ultimately makes decisions about which instruments are used. In the case of AU Health, that is Singh.